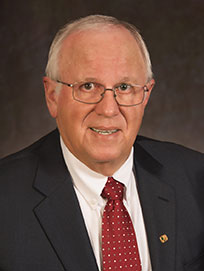 Hill served as chairman of First Electric’s Board from 2009 until June 2018. He represents the cooperative’s Perryville district, which includes parts of Conway, Perry, Pulaski and Yell counties. He has completed his Certified Cooperative Directors Certificate and Board Leadership Certificate. He is on the board of Cooperative Finance Corporation (CFC); past chairman of the CFC audit committee; past board member of AECC, where he served for 23 years; and past member of the AECC audit committee.

Hill is owner and board chairman of Hill Investments, LLC, and is a retired certified public accountant. He is a member of the Perryville United Methodist Church and The American Tree Farmers Association. Hill resides in Perry County with his wife, Lolly. 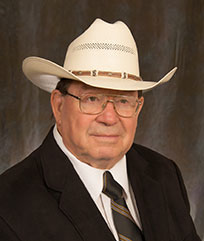 Richards was born in Chicago, but moved with his family to Arizona as a teenager. He received his bachelor of science degree from Arizona State University. He moved to Arkansas in 1960 and taught high school biology and science for two years. He met and married his wife, Pat, in 1961, and they moved to Springdale.

Richards was a man of many talents. He was a rancher, an auctioneer, a rodeo announcer, and he worked 36 years for Tyson Foods. He also anchored local TV news, where he gave the daily farm report. His passion, though, was writing Western novels. Richards’ first novel was published in 1992. He earned multiple Writer’s Federation awards and invested a lot of his time helping others who wanted to learn to write by speaking at conferences and seminars across the country. Richards’ 150th novel, The Mustanger and the Lady, was adapted into a screenplay and released as the movie Painted Woman in 2017.