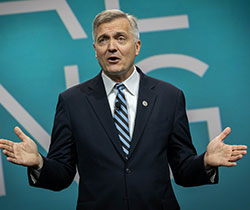 “It’s a great feeling, for me and for the entire team at NRECA, when we get to work with you to put a win on the board that means something in the communities we serve together,” Matheson told electric co-op directors and staff from across the nation, including Arkansas, at the meeting in New Orleans.

Co-op leaders, employees and consumer-members worked with NRECA last year to mount an intense, campaign-style effort to convince lawmakers to pass the RURAL Act to save co-ops’ tax-exempt status.

Some co-ops were facing the prospect of paying taxes this year because of a provision in the 2017 Tax Cuts and Jobs Act that redefined government grants as income. Any co-op that accepted grants to restore service after storms or bring broadband service to rural communities risked losing its tax-exempt status by exceeding the 15% limit on non-member revenue.

In December, Congress fixed the problem by passing the RURAL Act, which says that government grants do not count as income for co-ops. Of more than 100 proposed changes to the 2017 tax bill, the RURAL Act was one of two tax issues that were considered as part of the year-end budget agreement.

“We had several other legislative victories at the end of last year, important victories,” Matheson said. “But the RURAL Act stands out for what we accomplished together. We addressed an injustice, and we fixed it. And we did it on our own. We elevated our bill above politics. We made it local — about fairness to our members. And I firmly believe we have more successes like this in our future.”

The key to winning that vote was leveraging the stellar reputation that co-ops enjoy in Washington, he said.

Erin Kelly is a staff writer for NRECA.