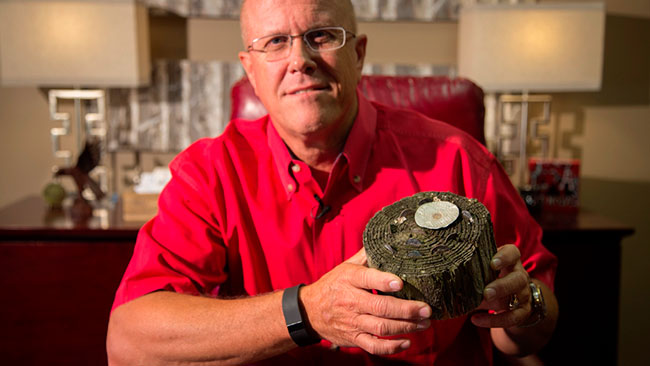 Years ago, Craighead Electric’s L.A. Carter hammered coins on top of a pole to entice younger workers to sign up. CEO Brian Duncan (shown) with a slice from one of those poles. (Photo By: Denny Gainer)

“[Carter] would tell these young guys as green as grass that the best-paying ground job is a lineman,” said Duncan, who was hired as a tree trimmer on the right-of-way crew in 1978.

“Then, they’d go finish the job and set the pole, so the money is 30 feet up in the air. I can still hear him saying that.”

No one knows how many coin-topped poles Carter’s crews set, but many are still scattered throughout the service area of the Jonesboro, Arkansas, co-op. 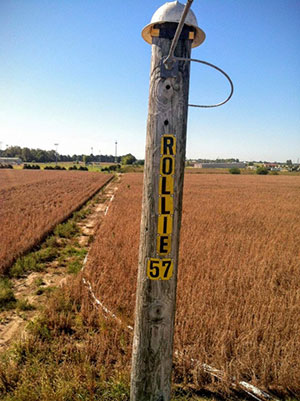 The pole-top tradition has evolved into another to mark a lineman’s retirement. (Photo By: Roland Wade)

A few months ago, an employee found one of the “treasures” while installing a security light on a pole.

“One of my guys was doing some maintenance and he was at the top of the pole and he saw this money,” said Duncan.

“He shot me a photo on his phone and I told him ‘Do not leave until you cut off the top of the pole. That’s a keeper.’ ”

A six-inch chunk of that pole, probably set in the late 1970s, now sits on Duncan’s desk. “I watch people looking at it. They glance at it, look away, and then glance at it again. Finally, they say, ‘What the heck is that?’ ”

Carter, a journeyman lineman, died in the early 1980s, but the tradition has been preserved—with a twist—as a way of celebrating retirements.

“On the last pole that someone climbs, he will hang his hard hat on top of the pole,” said Duncan. “L.A. Carter would be proud to know his tradition, although slightly changed, continues still today.”

Victoria A. Rocha is a staff writer at NRECA.