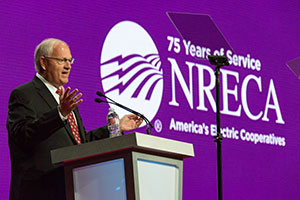 Take it from outgoing president of the National Rural Electric Cooperative Association (NRECA) Mel Coleman — co-ops are cool, and that bodes well for their future.

“Our challenges might be difficult, but our choice should be very easy because there’s never been a better time to be part of the electric cooperative movement,” Coleman said in his Feb. 28 address at the 2017 NRECA Annual Meeting.

Coleman, the CEO of North Arkansas Electric Cooperative in Salem, said he’s been impressed during his two-year NRECA term with how the cooperative model fits the spirit of the times.

Coleman says co-ops are positioned to take advantage of technological developments that could mean an even bigger role for electricity. He called it the “fuel of the future” in people’s lives.

“It’s possible, maybe even probable, that in our lifetimes, electricity will be the energy source for the vast majority of our vehicles, heating systems, and other home, farm and business needs,” he noted.

The co-ops will continue to play a vital role in local and national public policy as well, he said.

“The concern for the people we serve gives us an ideal platform to influence energy policy in ways that put our communities, consumers and our members first,” Coleman added. “Put simply, co-ops are cool.”

Coleman handed the president’s gavel to NRECA Illinois Director Phil Carson on March 1 at the conclusion of the annual meeting at the San Diego Convention Center. During his term, Coleman became known for his on-the-ground support of NRECA International’s mission of bringing power to impoverished nations around the world.

NRECA Board members and staffers credited Coleman with helping to keep the association on an even footing after a serious illness in August 2015 precluded CEO Jo Ann Emerson from continuing her duties.

In turn, he thanked them and urged them to take advantage of the new high-profile position that co-ops occupy. “Now that we’re in the spotlight, we must be great.” 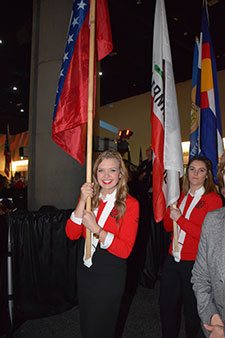 During the opening ceremonies of the meeting, Caleigh Pickard of Austin represented Arkansas as part of the Youth Leadership Council’s Parade of States by carrying the Arkansas state flag. Pickard, who attended the 2016 Electric Cooperative Youth Tour to Washington as a representative of First Electric Cooperative, was selected by chaperones during the tour to serve on the Youth Leadership Council. 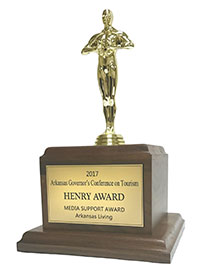 Arkansas Living received the Henry Award for Media Support from the Arkansas Department of Parks and Tourism during the 43rd Arkansas Governor’s Conference on Tourism on March 12-14 in Little Rock. The Henry Awards honor individuals and organizations that have made important contributions to the state’s tourism industry in the preceding year.

Arkansas Living, formerly Rural Arkansas, has been produced by the state’s 17 electric co-ops for their members since 1946. With nearly 400,000 subscribers and about 950,000 readers, the magazine is the most widely circulated Arkansas publication in the state. Articles promoting tourism in Arkansas have long been a mainstay of the magazine. It is produced by a Little Rock-based staff working for Arkansas Electric Cooperatives, Inc., the statewide service organization for Arkansas’ electric distribution co-ops, as well as staff from each distribution co-op. 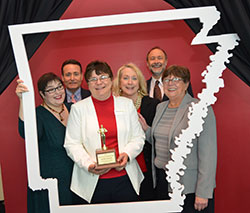 “We are extremely honored to receive this award,” said Sheila Yount, editor of Arkansas Living. “One of the co-ops’ main missions is to help build and promote our communities, and tourism is one of the best ways to do that.”

Gov. Asa Hutchinson presided at the luncheon and addressed more than 500 attendees about tourism issues in Arkansas. Kane Webb, executive director of the Arkansas Department of Parks and Tourism, served as master of ceremonies and Miss Arkansas 2016 Savannah Skidmore assisted in the presentation of the awards.

In addition to Arkansas Living, the other Henry Award winners were:

The Henry Awards have been a feature of the annual Arkansas Governor’s Conference on Tourism since their debut in 1981. The awards are named for Henri de Tonti, founder of Arkansas Post in 1686, and who is often hailed as the first “Arkansas Traveler.”