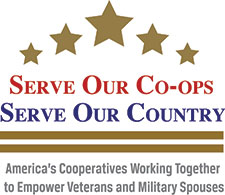 Most military bases are located in rural areas, and the electric distribution systems at some bases are operated by electric cooperatives. A large percentage of our nation’s troops — some estimates suggest as high as 40 percent — come from rural America. Even the organization responsible for representing electric cooperatives in Washington, D.C., the National Rural Electric Cooperative Association (NRECA), was once led by a retired Army general.

Last year, America’s electric cooperatives began a new chapter in their long history of support for the military with the launch of “Serve Our Co-ops; Serve Our Country,” a nationwide initiative to honor and hire military veterans and their spouses.

The program was developed to help electric cooperatives address a generational turnover in its workforce. Over the next five years, NRECA estimates electric co-ops will need to hire approximately 15,000 new employees to replace retiring baby boomers.

Those new workers will fill roles in every department, from lineworkers climbing poles to member service representatives answering questions to engineering and IT experts designing and managing a smarter electric grid.

In addition to the technical skills these jobs require, electric cooperative employees must be hard-working, disciplined, loyal, safety-conscious and team-oriented — qualities that are common among military veterans.

This past summer, “Serve our Co-ops; Serve Our Country” celebrated a major milestone when former Air Force Capt. Jeremiah Sloan became the first veteran officially hired through the program.

The story of how Sloan landed his new job as an electrical engineer at Craighead Electric Cooperative in Jonesboro reads like the plot of a Hollywood movie.

For several months, Craighead Electric CEO Brian Duncan had been working to fill the position. The co-op advertised the opening in local papers and national job sites, and attracted a number of highly qualified candidates. Sloan’s application was among those strong candidates, but he wouldn’t be available to start for six months when his Air Force service ended.

Duncan, hoping to fill the position sooner than that, made offers to two other well-qualified applicants, but was unable to come to terms with either.

Shortly after the second candidate fell through, Duncan attended a national conference for electric cooperative CEOs. One of the sessions featured two fellow co-op CEOs, one of whom was a 25-year Air Force veteran, who discussed the newly launched veteran hiring initiative.

Jeremiah Sloan on the job at Craighead Electric. NRECA

“The whole time they’re talking I’m thinking about Jeremiah; we probably need to look at this guy. For these guys coming out of the military, what better way to say ‘thank you’ than to give them a job,” Duncan said.

They scheduled an interview, and it didn’t take long for Duncan to realize the co-op had found its next engineer in Sloan.

“He was extremely professional. It was straight down the line,” Duncan said. “‘Yes sir.’ ‘No sir.’ Very detailed in his answers to all of the questions. Very thoughtful in his answers. It was the perfect interview, you might say.”

Sloan brings more than a strong résumé and professional demeanor to his new position at Craighead Electric. He also brings a love for the community and a desire to return to his roots.

“I grew up in northeast Arkansas,” Sloan said. “My family is a long line of farmers, and they’re actually on Craighead Electric’s lines. The whole reason my wife and I decided to separate from the Air Force was to return home and be close to family.”

Though Sloan is the first veteran hired through the initiative, he won’t be the last. Several other veterans have been hired through the program. In addition to nationwide outreach through NRECA, approximately 50 electric cooperatives across the country have already taken the pledge to join the effort on the local level.

Two managers at Arkansas Electric Cooperatives, Inc., (AECI), a statewide service organization, based in Little Rock, were recently honored by the United States Marine Corps for their support of a Marine reservist working at the cooperative’s warehouse in Stillwater, Okla. In August, Russ Dilley and Eric Creekmore were presented the Patriot Award for giving AECI Truck Driver Michael Henderson the workplace flexibility he needs to serve in the Marine Corps Reserves.

“Serve Our Co-ops; Serve Our Country” is another way America’s electric cooperatives can show concern for community while building a next-generation workforce that will deliver the exceptional service co-op members expect and deserve.

To learn more about the program and career opportunities for veterans at electric-cooperatives, visit www.ServeVets.coop