Perhaps it’s fitting that the history of Valentine’s Day — a romantic day observed with an abundance of fragrant red roses — is a bit thorny.

There are differing stories about the origins of Valentine’s Day. Many involve one or possibly more martyrs called St. Valentine executed on Feb. 14 as early as 270 A.D. Others involve an ancient February pagan festival celebrated in Rome — one that was less than lovey-dovey.

But by all accounts, Valentine’s Day, which has evolved into a softhearted occasion for sharing sentiments 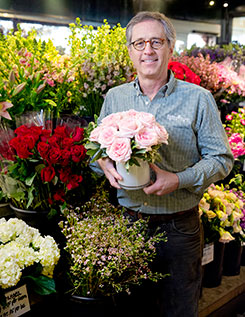 and giving gifts, most certainly has been around for a long time.

Says Howard Hurst, president and CEO of Central Arkansas florist Tipton & Hurst, “Valentine’s is an old holiday. I mean, like, Victorian era  — that was huge, all the love letters. It’s nothing new. Mother’s Day is new; Valentine’s Day is much older. And giving flowers, humans have done this for a long time. So, they are not a new commodity to be sold, by any means.

“This is something that God gave us a long time ago.”

Though not as old as Valentine’s Day, Tipton & Hurst has been in existence an impressive 135 years and has helped Arkansans celebrate it as many times.

About his family’s business that opened in 1886, Hurst says, “I actually have the contract, signed by my grandfather, Joseph B. Hurst, and David Tipton. The Tiptons were the growers, and so my grandfather was working on the railroad and somehow met up with the Tiptons.” 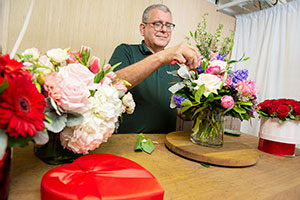 As Tipton & Hurst, they established Little Rock greenhouses and a store on Main Street. “My grandfather, he married the designer — my grandmother — and she ran the store,” Hurst says. “And then my father took over after World War II and bought out the Tiptons in the ’50s before I was born. And then I took over when my dad retired. I was president when I was 26. Now I’m 63. So, it’s just third generation, even though it’s 135 years old.  “And we continue to grow.”

And Valentine’s Day is their Super Bowl — well, make that their Rose Bowl. “It’s the single busiest day for flowers,” Hurst says.

Florists around Arkansas agree that Valentine’s Day is their biggest day of the year. And the most berserk. 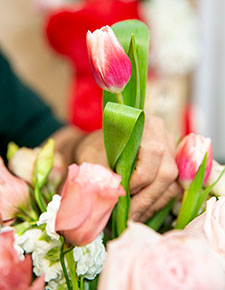 Tulips give a pretty pop of pink to an arrangement.
photo Karen Segrave

Says Judy Brooks of Judy’s Flowers & Gifts in Camden (and a member of Ouachita Electric Cooperative): “You cannot even comprehend it. It’s just a nightmare, but it’s so fun.”

Says Wendy Stevens of Debbie’s Flowers in Forrest City (and a member of Woodruff Electric Cooperative): “Every year, we take off from before Christmas through the first of the year, just so that we can rest our bodies to prepare for it. You have so many orders and such a little time to fix them. That’s what makes Valentine’s so overwhelming.”

Says Lorin Geisler of Emily’s Flowers in Lonoke: “Valentine’s Day, that is our harvest. We live in a farm community, and so we consider that our harvest. … There will be so many roses that you will not even hardly be able to walk through the flower shop from just the massive amounts of flowers.”

Says Amanda Alman, owner of Rockin Roses, that she runs out of her barn-turned-studio in Gassville (and

a North Arkansas Electric Cooperative member): “It is a madhouse. Like, the phone doesn’t quit ringing.” 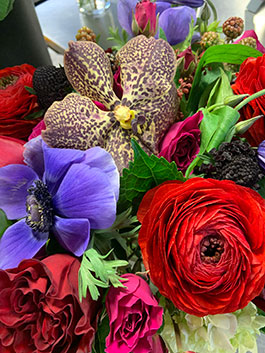 Vanda orchids, ranunculus and anemones make for a vivid bouquet at Pigmint in Fayetteville.

member): “Oh, it’s crazy. … It’s very chaotic. We’ll reach a point where it’s like, ‘OK, we have to turn off the phones; we can’t take any more orders!’” (Word to the wise: When it comes to purchasing flowers, don’t be a late bloomer! Place those orders early!)

But while Valentine’s Day is the flower industry’s biggest day, some years are more bountiful than others.

“It’s very dependent, or at least it has been, on the day of the week it falls on for us,” Hurst says, explaining that many customers order Valentine’s Day arrangements and presents to be delivered to workplaces on weekdays.

But this year, Hurst says, “It’s on a Sunday, and there’s COVID, and people aren’t at work.”

The same virus that has wilted florists’ weddings and events business could have a similar effect on Feb. 14. Though being in business for 135 years does offer some reassurance. Hurst says, “This isn’t our first pandemic.”

As for Valentine’s Day 2021, he says, “We have no idea what this one’s going to be like. We’re predicting it’s not to be anything like it was in the past. … Who knows? We really don’t know.

“You just kind of guess, and hopefully you’re right.”

After all, the process of securing copious quantities of fresh flowers is not only expensive, it’s extensive.

“Obviously, in the winter, you have no local flowers,” Hurst says. “For Valentine’s Day, you’ve got to ship pretty much everything in. Probably half of our roses come from South America — Ecuador, Colombia. Those are big producers now. They’re either flown in, or sometimes they even put them on refrigerated freighters. They come by boat in a refrigerated container, and then they’re trucked in.”

And ordering the right amount is critical. Because when florists order too many, Hurst says, “Eventually they’ll die, and you’re just throwing them away. You can’t eat them.”

Although you can’t eat flowers, you can eat chocolates and other snacks. And Arkansas florists would also 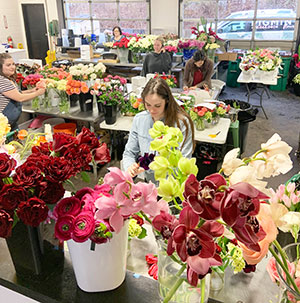 Across Arkansas, Valentine’s Day is the busiest day for flower shops, including Pigmint Floral Studio in Fayetteville.
photo courtsey of Pigment

be happy to package those and balloons, bears, candles, spa essentials and other popular gifts for your loved ones this Valentine’s Day. Still, flowers really make the heart flutter.

At Pigmint in Fayetteville, roses are always popular (“I love roses, and I’m obsessed with rose varieties,” Hermez says). But at her contemporary brick-and-mortar floral studio, which began in a borrowed Airstream camper on the side of the road, Hermez says, “Probably our biggest seller is ‘Designer’s Choice.’ We have a lot of customers who trust us, and they just say, ‘I want to spend this much money. Go for it!’”

While some flower patrons seek something fresh and different, other buyers stick with tried-and-true bouquets in classic Valentine’s colors.

Stevens of Forrest City says, “In our little town for Valentine’s, the most popular are roses. We try to bring more than just red roses. We try to keep a variety of colors, and those have become more popular. Some people are wanting to branch out from just the red. But I’d say definitely the big, major sellers are roses. The red rose is the No. 1 seller.”

In Camden, Brooks — who was selected to work on the 2018 White House Christmas decorations and who makes a monthly appearance on Little Rock’s KATV Channel 7 — says she enjoys experimenting with different flowers for Feb. 14.

“We do a lot of lilies,” she says. “The lily-rose combination is a big seller. We also do a ‘Romance Bouquet’ with different colors of roses. … Carnations and daisies are always sweet. We do a lot of Gerbera daisies — reds and purples, and reds and pinks.”

At Brooks’ 25-year-old shop, there’s even an exclusive rose available. 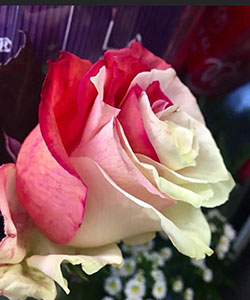 “We have a Judy Rose,” she says. “In 2018, one of the growers in California grew us a special rose for my shop, and we can only get it at Valentine’s. It’s called the Judy Rose. It’s a creamy off-white to a hot-pink; it’s kind of variegated. We’re really proud of that.”

Still, she says, most of her Valentine’s Day customers already know what they want.

“The men who order flowers are so fun to work with because they’re so  traditional,” she says. “They just want to look at that red rose. They like that traditional red rose. Just one is beautiful; I’ve sold all the way up to three dozen at a time.

“You cannot go wrong with a red rose.”

Being a florist is more than arranging and delivering tokens of love. “It’s a labor of love,” says Geisler, who has owned the 20-year Lonoke business for five and a half years.

“For a teenager, the first time they buy flowers is prom,” she says. “And so we take them from prom to a wedding and now to babies. And Valentine’s Days. Maybe they have a funeral to send something to. And so, it’s a story. It’s a journey.”

And that journey is a sentimental one.

Says Hurst, “We’re just lucky to be in a business where people are thrilled to get what we deliver. We’re delivering things that make people happy and delivering emotions. It’s a nice thing.”

Stevens, who grew up in the Forrest City flower shop that her family has owned since 1980, left a career in nursing to return and help run the shop with her mother and grandmother.

But she’s still in the healing business. After all, in a tumultuous world, there’s something restorative about 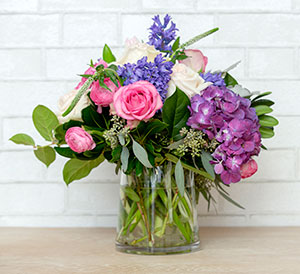 the beauty of blooms.

“There’s magic in flowers.” Stevens says. “Even the most critical person, when you see them get flowers, you still see a little bit of a smile come on their face. I think it’s God’s beauty. People love them. They can say they don’t, but they do. It makes them happy. People can say they’re a waste of money. But I think a lot of it has to do with someone took time out of their day to think about them and write them a sweet card and spend money on them. It makes people feel good. People want to feel good right now. They want to feel love. They want to feel cared about.

“Flowers do that. And I think they will forever.”

The care and feeding of flowers 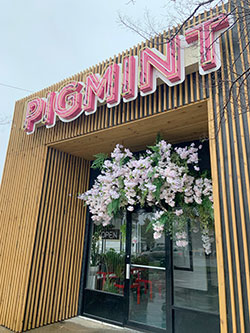 Pigmint Floral Studio in Fayetteville has blossomed from its beginnings in a borrowed Airstream camper on the side of the road.

We asked Chelsea Hermez, owner of Pigmint Floral Studio in Fayetteville, for tips to make Valentine’s Day flowers flourish as long as possible.

It comes down to one word, Hermez says: Water.

“Flowers are a lot like fish. They don’t live out of water,” she says. “Check the water level right away — because sometimes water will slosh during delivery. Fill (the vase) all the way to the rim, and check it every day.

“If the water starts to get murky, take it to the sink, and stick the tap in there, and just let the water run. Let it overflow in the sink until the water is clear again.”

What about the little packet of “flower food” that often comes with arrangements? Use it or toss it?

“Use, for sure,” she says. “Put that in right away. Even if it’s a smaller arrangement, you can just use half. And when the water starts to get murky, flush it until it’s clear, and then put the other half in there.”

Now we know — once and flor-al!