Earlier this year, after the record-setting bitter cold spell, Mardi Phillips of West Fork contacted her electric co-op — Ozarks Electric Cooperative — with a conundrum. Years earlier, her central heating, ventilation and air conditioning (HVAC) unit had stopped working. Faced with the unmanageable cost of replacing it, 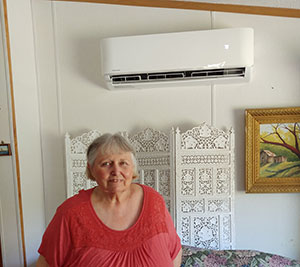 The allure of the lower upfront cost to switch to these units often makes it an easy decision. The downside is that these solutions often lead to higher utility bills because of inefficiencies in these technologies. In a sense, you could be “robbing Peter to pay Paul,” or spending less out of pocket today only to spend more for months and years to come. Such was the case for Phillips. Her utility bills were higher than she’d like, especially in the coldest and hottest of months. But the catalyst for her call to the co-op was that the electric space heaters kept causing issues with her electrical wiring, which hadn’t been designed with that electric load in mind. She knew that dealing with the recurring electrical issues was risky, and she was very concerned about the possibility of a fire in her home.

Luckily for Phillips, the statewide energy efficiency program of Arkansas’ electric co-ops was conducting tests with mini-split heat pumps. Her situation was perfect for the test. We determined a suitable location in her home that would provide both heating and cooling to the main living areas and the master bedroom. We installed a 2-ton unit, which provides a safer, more efficient and affordable HVAC system for her home, much to her delight.

“Now, I don’t have to worry about those old space heaters or air conditioners,” Phillips wrote in a thank-you note to Ozarks Electric. “Your kindness is amazing and wonderful! Thank you, thank you, thank you!”

Although mini-split heat pumps are not extremely common, you may have seen them without realizing it. They have a small outdoor condenser unit connected via insulated copper tubing and a communication wire to an indoor unit. Often mounted on an exterior wall near the ceiling, they are a good solution for many homes that don’t have central heat and air. They are also good options for “bonus rooms” or garages converted to air-conditioned spaces that aren’t easily serviced by an existing system. Best of all, they are often more than two times as efficient as a window or portable air conditioner and three times more efficient than an electric space heater. In other words, you could produce the same amount of cool air as a window unit for 50 cents on the dollar, or the same amount of warm air as an electric space heater for less than 33 cents on the dollar, all from the same unit! Because they are heat pumps, they can either move heat from the indoors to the outdoors (cooling) or just as easily move heat from the outdoors to indoors (heating), even in temperatures well below zero, depending on the unit.

The purchase price of these units usually falls between the higher costs of a central unit installation and the low-cost window air conditioner and space heater combination. But because of their efficiency, they can easily be the most affordable option in the long run.