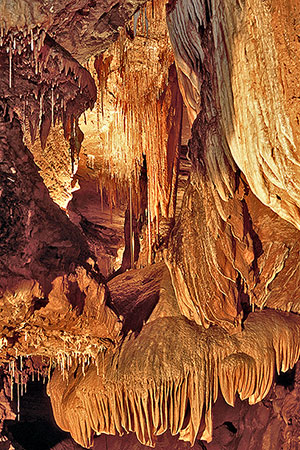 Stalactites drip like melted wax from the ceilings at Cosmic Caverns, Berryville.

If it’s too hot this summer for outdoor activities above ground, consider going below.
Underground, mostly in Northwest and north-central Arkansas, there are beautiful caves with forgotten springs and rivers, amazing rock formations and mazes, along with little-known creatures that live only in the dark.

And the temperature in the caves is in the mid- to high-50s year-round. (Caves, however, offer no respite from humidity.)

There are more than 2,000 documented caves in Arkansas with the highest concentration in the Ozarks.

The most popular of Arkansas caves, and those that generate the most money for the tourism industry, are eight privately owned “tour caves” and Blanchard Springs Caverns, owned and operated by the U.S. Forest Service. These caves offer guided tours and are easily accessible with lighted walkways and handrails.

There are thousands of people, known as spelunkers, who like their caving a little more challenging — and dirty. They enjoy spending their time squeezing through openings, crawling through gooey mud or using ropes to climb up and down tall, smooth rock faces.

Dewayne Agin of the Little Rock Grotto, an organization of caving enthusiasts, said it’s difficult for many people to understand the fun of “laying down in the mud or going through a crawl with my face half in the water.”

For Agin, caving is a chance to “see things that few people, and sometimes no other person, has seen before.” There are five grottos in Arkansas. Grottos are local chapters or organizations affiliated with the National Speleological Society that sponsor caving trips, offer training, and practice conservation and preservation.

There are 25 to 30 active members in the Little Rock Grotto, which organizes caving trips during which members take underground photographs, survey and map caves, and help with cleanup and restoration as needed. Agin has been caving for 43 years and for 20 years was president of the Little Rock Grotto.

“We go (caving) really all over the state, but mainly in central to northeastern parts of the Ozarks,” he said, adding the grotto’s members search for caves they would like to explore. Sometimes, however, property owners seek the grotto’s help with exploring caves they are reluctant to enter themselves. And every so often, grotto members just go out hiking and look for small caves, he said. 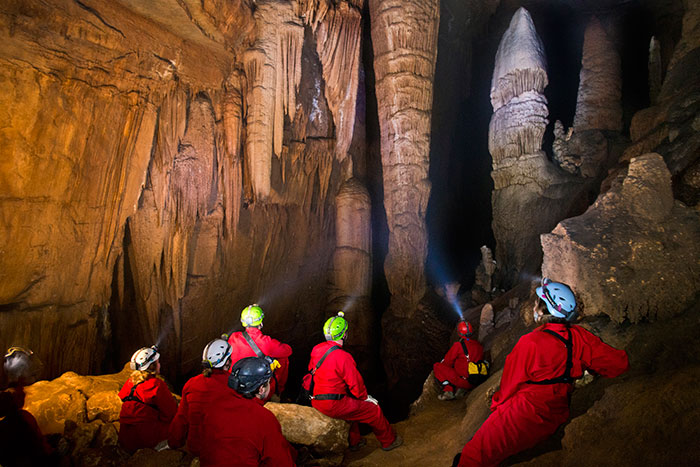 The Wild Cave Tour at Blanchard Springs rewards the agile and brave with sights not accessible on the regular public tours.

The COBRA Grotto — that is, Cavers of the Batesville Region of Arkansas — is affiliated with Lyon College in Batesville and has about 50 regular members. It does spelunking for fun and research.

Thomas also has done some research on White-Nose Syndrome, a disease fatal to some bat species that was found in several caves in Arkansas in 2014. The disease, which killed millions of bats in northern states since it was first identified in 2006, is not a threat to humans, pets or livestock.

Since the discovery in Arkansas, “pretty much all of the public land caves in Arkansas have been closed, but there are a few exceptions. Blanchard Springs is one,” Thomas said.

The geology of the Ozark Mountains, stretching from northeast Oklahoma through northern Arkansas and into Missouri, was perfect for the creation of caves for about 350 to 500 million years, Thomas said.

“All of that rock used to be an ocean bed, so you have a lot of limestone and dolomite and sandstone, all of which are relatively easily erodible types of rocks,” he said. “So they are the types of things caves form in.”

The economic impact that caving has on tourism in Arkansas is real, Thomas said, but it would be difficult to quantify. Cavers camp or stay in hotels, purchase supplies and equipment and eat, just like other outdoor enthusiasts.

“Cavers tend to be naturally outdoor people, and parts of the state are really built on the outdoor tourist industry, so caving is going to have an impact on that,” he said.

Thomas and Agin admit caving can be expensive because of the equipment necessary to explore safely. They also said inexperienced and unprepared cavers often — too often — venture off into places they are not prepared for.

Both men, along with other experienced cavers from other grottos in the state, responded to the Blowing Cave near Cushman in Independence County last summer when three Arkansas State University students were lost. “It took us all day to find them and get them out,” Thomas said.

The three were reported missing on a Wednesday afternoon after they failed to return from the caving trip. They were found the following afternoon by rescuers.

Proper safety equipment, including helmets and knee pads, as well as proper ropes for rappelling, are all key, he said. Proper lighting also is a must. Caving safely can be costly, just like any other hobby. 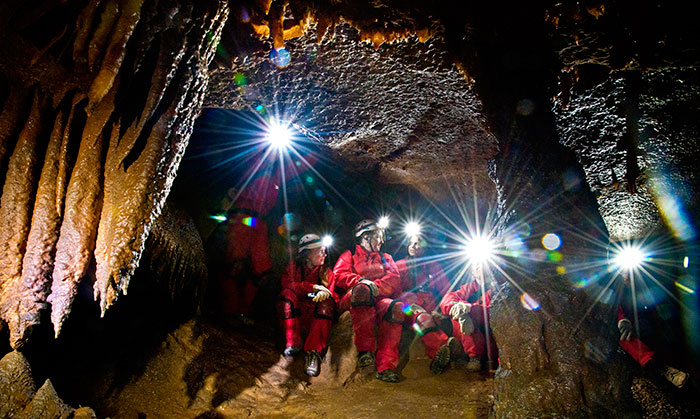 The by-reservation-only, physically demanding Wild Cave Tour at Blanchard Springs can be a guided introduction to more hands-on spelunking in Arkansas.

“I’ve got what is considered a cheap head lamp among cavers, and my head lamp cost $400,” Agin said. “And I’ve got a friend who said, ‘Don’t tell my wife, but this is what I bought for $1,600.’ So, there are varying degrees, and not everything is that expensive.” 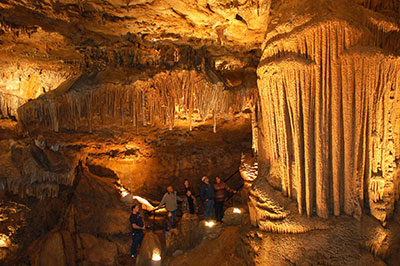