Last month, we revealed details for our 10th Annual Energy Efficiency Makeover contest. By June 12, we had received nearly 5,700 entry forms! Join the fun and maybe you’ll be chosen to receive an LED lighting retrofit kit provided by General Electric (GE). Each kit will include LED general purpose, candelabra, recessed and flood lights — enough to retrofit most homes. Ten winners from each of the 17 distribution cooperatives will be chosen by a random drawing and notified by Aug. 4. All winners will be listed on the www.smartenergytips.org website and social media. July 15 is the deadline for entries, so don’t delay.

In previous columns this year, we have extensively discussed LED lighting. A key point is that LEDs use nearly 80 percent less energy than incandescent bulbs. Also, when shopping for lightbulbs, be aware the industry has created new labeling and has transitioned from measuring in watts to measuring in lumens. If you prefer the same light appearance as incandescent bulbs, look for a Kelvin (K)-scale temperature of 2,700 to 3,100 K. Whiter and daylight colors range from 4,500 to 6,500 K. Also, the estimated average usage for an LED equivalent to a 100-watt incandescent bulb only has an operating cost of about $1.81 per year. Even changing from compact fluorescent spring lamps to LEDs will recognize a savings, although not as significant as swapping out an incandescent.

Another impactful benefit from conversion to LEDs is a reduction in unwanted heat inside the home. As a reminder, approximately 90 percent of the energy used to light up Thomas Edison’s incandescent bulb is emitted in the form of heat. Those of you who remember the Easy Bake Oven may be able to relate. It was a 100-watt incandescent bulb, and in some models, two incandescent bulbs, that provided the heat to bake cookies. Imagine 15 100-watt incandescent lightbulbs in use during the summer. This scenario would be comparable to one 1,500-watt space heater in use while the air conditioner is running.

Heat always moves to cool, so during the summer the air conditioner is working to move Mother Nature’s unwanted heat back to the great outdoors. Also, the unit is removing heat that originates inside the home. The list of indoor heat sources is comprehensive and generally correlates with creature comforts and modern conveniences. For instance, heat emits from a stove, oven, refrigerator, toaster, coffee maker, television, people, pets, bathing, hair dryers, and lighting, to name just a few. Transitioning to LEDs saves money on energy costs for operation, reduces unwanted heat and helps the air conditioner run less. 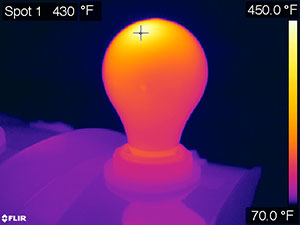 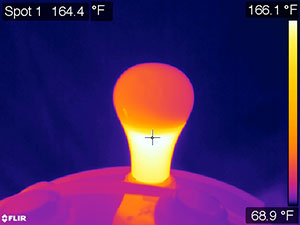 An LED bulb with same lumens and K-color scale, but emitting much less heat (164 F)

The infrared images that accompany this column illustrate the heat emitted from an incandescent and LED bulb. Since GE is our makeover partner, I thought it would be fitting to use their product for our demonstration. Note the temperature difference between the incandescent and the LED confirmed by the infrared camera. Regrettably, you won’t be able to bake cookies with LEDs. But, you’ll save money and have a more comfortable home.

Be sure to enter the makeover contest today! And please feel free to contact me at smartenergytips@aecc.com with any energy efficiency questions. Also, be sure to follow us on Facebook at www. facebook.com/smartenergytips.org, as well as listen to our podcasts.