Twelve is a noteworthy number when it comes to food. 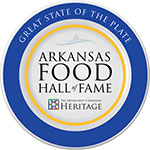 Doughnuts are sold by the dozen, as are cookies. Eggs come in cartons of 12.
We buy 12-packs of beer and Coke.

So, it’s worth mentioning that following the February induction of three additional members, there are now a solid dozen restaurants in the 4-year-old Arkansas Food Hall of Fame.

“Way back then, we thought, ‘With so much interest in food, a Hall of Fame — where we talk about and honor our incredible, historic, authentic, local food scene in Arkansas — would be a hit,’” says Stacy Hurst, secretary of the Arkansas Department of Parks, Heritage and Tourism. “And guess what? We were right. Arkansans have loved the Food Hall of Fame.”

Each year, the 13-member Food Hall of Fame committee narrows down a lengthy list of public nominations to a bite-size number of finalists in different categories. From there, a “blue-ribbon panel” selects winners.

A lot of fun — and a lot of food — is what we encountered as we traveled all over the state to visit the 2020 class of honored eateries. Join us for a tasty trek around Arkansas.

As its name, which glows in neon at night, suggests, Cattleman’s — a Texarkana time capsule — is all about beef.

But in addition to “STEAKS,” written in charming all-caps lettering on the brick building, the restaurant is also 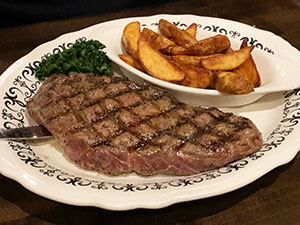 The Rib Eye and Steak Fries at Cattleman’s Steak House in Texarkana.

about seafood — or, rather, “SEA FOODS.”

It’s also about Calf Fries — a “Texas version of Rocky Mountain Oysters” and Turkey Fries — “same as Calf Fries, only from a turkey!” We won’t explain them other than to say the specialty appetizers are neither oysters nor fries.

Joe Neal Oliver and his son, Cash, run the restaurant that was founded by Joe Neal’s father, Roy, in 1964, when the now-bustling State Line Avenue was a “two-lane road and the restaurant was surrounded by wooded land,” says the website.

Its surroundings may have changed, but Cattleman’s hasn’t. Joe Neal attributes the restaurant’s longevity to “consistency and hard work,” adding, “We have new restaurants open every week in Texarkana. But we’re still doing the same thing we’ve always done.”

Wood paneling and roller chairs provide old-fashioned comfort while ceiling fan light kits, hanging strands of Christmas lights and table candle lamps offer intimate illumination. The scene takes us back to steakhouses we visited with our grandparents and back to a time when eating out seemed special.

It also takes us back to a time when we didn’t fret over what we ate. 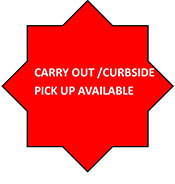 There are two things Ed Walker’s, a Fort Smith fixture for more than 75 years, is best known for, judging by the 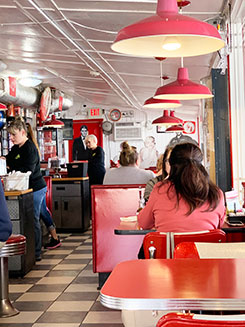 signs and the staff T-shirts.

“Only Curb Service Beer in Arkansas.” “Home of The French Dip.”

And we — who are visiting on a weekday during work hours with a 160-mile drive home — cannot imbibe any of the more than 30 beer varieties. And we cannot cope with the idea of wet bread.

Still, we are professionals who have come to do a job. So, we order Ed Walker’s World-Famous French Dip — with, sigh, a Diet Coke. We also order a basket of Texas Toothpicks as a starter. The tasty, crisp slices of fried onions and peppers served with ranch will sustain us if a soggy sandwich can’t.

While there are plenty of lunchtime customers parked outside, where a sign directs diners to flash their headlights or call for service, we’ve opted to sit inside the cheery old-school diner with a black-and-white checkerboard floor and red furnishings and accents. It’s full of all things retro and Razorbacks, including a Razorback kiddie ride. It actually works, confirm the regulars in a nearby booth who have come in for the day’s turkey-and-dressing special.

Before we dig into the Dip, we sample the other “french” fare on the plate — the crinkle fries, enhanced with a sprinkle of seasoned salt recommended by our sweet server.

Finally, we plunge the sandwich of tender beef on sourdough ordered with horseradish-and-chive cheese into the foam cup of au jus and take a mushy, messy bite. Ooh la la! The French Dip is … magnifique! As savory as it is sloppy, it’s possibly the most delicious sandwich we’ve ever tried. And here we had “dip-rived” ourselves all this time. 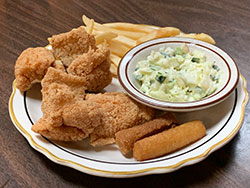 A catfish dinner at Murry’s Restaurant with fries, coleslaw and hand-rolled hushpuppies.

A few things to know about Murry’s before driving out to enjoy the legendary Delta catfish joint:

Have cash or checks. The restaurant doesn’t accept credit cards.

Take adult beverages if desired. The restaurant doesn’t serve them, but it doesn’t stop folks from providing their own. We spot several coolers on this Friday night.

Plan ahead. The restaurant is open only Thursday through Saturday and only for dinner.

And plan to stay a while. Murry’s is a family-owned-and-operated labor of love. Rushing would be rude. So, sit back and relax in the casual wood-paneled space. Watch Wheel of Fortune on the overhead flat screen. Admire the antler chandelier and the bird mounts and the “general store” corner full of vintage household items. And visit.

Since 1986, Rebecca and Stanley Young have owned the restaurant that was started by Rebecca’s father, Olden Murry, in 1961. The couple and their daughters continue to work there.

Stanley Young says, “We’ve always taken pride in what we’ve done. We stress the quality of our food. It’s hard work, and we’ve done it for 50 years. We’re still hanging in here.”

And so are the regulars, many of whom drop by Stanley’s kitchen to chat. That’s just fine by him.

“I’ve done it so many years, it doesn’t distract me,” he says. “I would say 75% to 80% of the customers that come here, it’s repeat business. And the first thing they want to do is make sure me and Becky are here.”

So, say your hellos. And then start the meal by sharing an irresistibly crunchy order of Stan’s Homemade Onion Rings.

From there, read through all the entrees (T-Bone Steak, Quail Dinner, Frog Leg Dinner …). And inevitably decide on Murry’s catfish — fried catfish (though there is broiled and blackened, too). Choose fries or baked potato, coleslaw or salad. The Seafood Dinner, with fried shrimp, deviled crab and catfish, is another worthy selection. Just don’t miss the catfish. Catfish and coleslaw. As fulfilling as the classic catfish, Murry’s creamy coleslaw features surprise sweet bits of apple.

Murry’s also serves soft, warm loaves of butter-kissed bread. It’s largely because of that bread that we have no room for the bourbon-sauced bread pudding, another specialty.

Other Food Hall of Fame Awards

Proprietor of the Year: 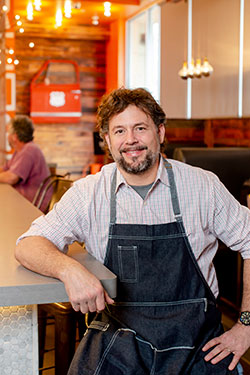 But Scott McGehee says he grew up having no culinary ambitions.“It never occurred to me that I’d be in the restaurant business,” says the executive chef and now Proprietor of the Year.

He jokes, “I went to the University of Arkansas; my emphasis was partying, but also history and business.”

Eventually, he woke up and smelled the risotto with shaved truffles — the kind of gourmet dish his father just whipped up at home. (“I kind of thought that was normal. Apparently, it wasn’t.”)

McGehee, who worked in restaurants and traveled in his youth, says, “It hit me one day that I just loved food. And I knew a lot about it. I had a passion for it.”

It led the Fayetteville-born, Little-Rock-raised McGehee to the California Culinary Academy in San Francisco and renowned Chez Panisse restaurant in Berkeley, California, before making his way back to Arkansas and running restaurants like family members before him.

For more than a decade, McGehee’s own color-named enterprise — Yellow Rocket Concepts — has become

synonymous with creative and quality cuisine served in stylish settings. His restaurants include ZAZA Fine 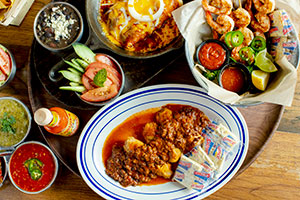 McGehee says passion is the reason he and his partners have been able to open — and keep open — so many eating establishments.

He says, “I think it’s having a passion for what you do and loving food and loving people. … Having a strong foundation in terms of your craft, but also just loving it is critically important. Loving your team and treating people with dignity and appreciation and respect is very, very important. … Loving your guests and really appreciating their feedback and learning from it is really important.”

There’s talk of opening even more Yellow Rocket restaurants in the near future.

“What I can share is … we are going to do another location or two in Northwest Arkansas,” he says. But for now, he’s keeping the details close to his apron.

But, yes, The Ohio Club, established in 1905, really does serve food — good food. So good that it secures the greatest number of public nominations to win the non-juried People’s Choice Award.

Because the sidewalk sign — positioned near the life-sized statue of a cigar-smoking Al Capone handcuffed to a bench — boasts about the “Best Cheeseburger & Reuben In Arkansas,” we order those to follow the novel and lively Breaded Spicy Green Beans appetizer.

For the gangster with the smaller appetite, there’s the Lil’ Al double slider.

Gone, But Not Forgotten: 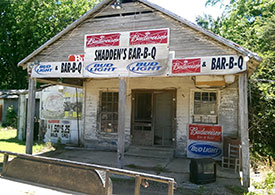 Shadden’s was a Marvell marvel for more than 40 years. photo courtesy of the Shadden family.

He paints the scene, “The humble roadside spot had an easy-to-understand menu: hot or mild, regular or jumbo, with or without slaw. One table, so you didn’t need to worry about where to sit!”

Shadden’s BBQ was operated in an old country store for more than 40 years until shortly after owner Wayne Shadden’s death in 2010.

Nelson says, “Wayne’s skill at preparing the meat was matched by his wife Vivian’s sauce.” He adds that Turkey Scratch native and musician Levon Helm had cases of said sauce shipped to his home in Woodstock, New York.

Accepting the award on behalf of the restaurant, Vivian says with a smile that her sauce was the result of “about 200 recipes tried.”

She says Wayne would have been proud.

“He loved the people that he met. He loved the barbecue and talking about it; he’d show them how he cooked it. And he really, really enjoyed it.”

Other Gone, But Not Forgotten finalists: Habib’s Café of Helena and Mary Maestri’s Italiano Grillroom of Springdale.

Each spring, Little Rock’s Annunciation Greek Orthodox Church puts out the pastitsio (Greek lasagna) and puts on the “largest ethnic festival in Arkansas.”

The event is scheduled to celebrate its 36th anniversary May 15-17 with plenty of gyros, souvlaki (grilled meat skewers), spanakopita (spinach pie) and pastries.

The festival, which benefits the church and area charitable organizations, offers entertainment and shopping too. But it’s the food (hence the festival’s busy drive-through) that keeps the people coming “baklava.”

“I think I parked in Sherwood the last time I went.”

A second helping of honors 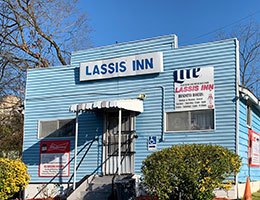 In February, Little Rock’s Lassis Inn was announced as one of six recipients of the James Beard Foundation’s 2020 America’s Classics Awards. 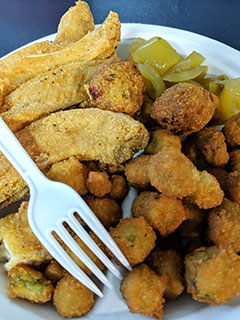 receive one of the foundation’s esteemed culinary awards. Jones Bar-B-Q Diner in Marianna received an America’s Classics award in 2012. Both restaurants were among three inductees of the Arkansas Food Hall of Fame’s inaugural 2017 class.

The James Beard Foundation writes that the Lassis Inn — which was founded in 1905 by Joe and Molassis Watson and is now run by Elihue Washington Jr. and wife, Maria — “remains a community hub — a gathering spot where people come for buffalo ribs, cold beer and warm conversation.”

Addressing Washington at the awards ceremony, Nelson says, “When we’re finished with the food world, they’re going to know that buffalo is not something running around with four legs. It’s a carp sucking on the bottom of the river.”