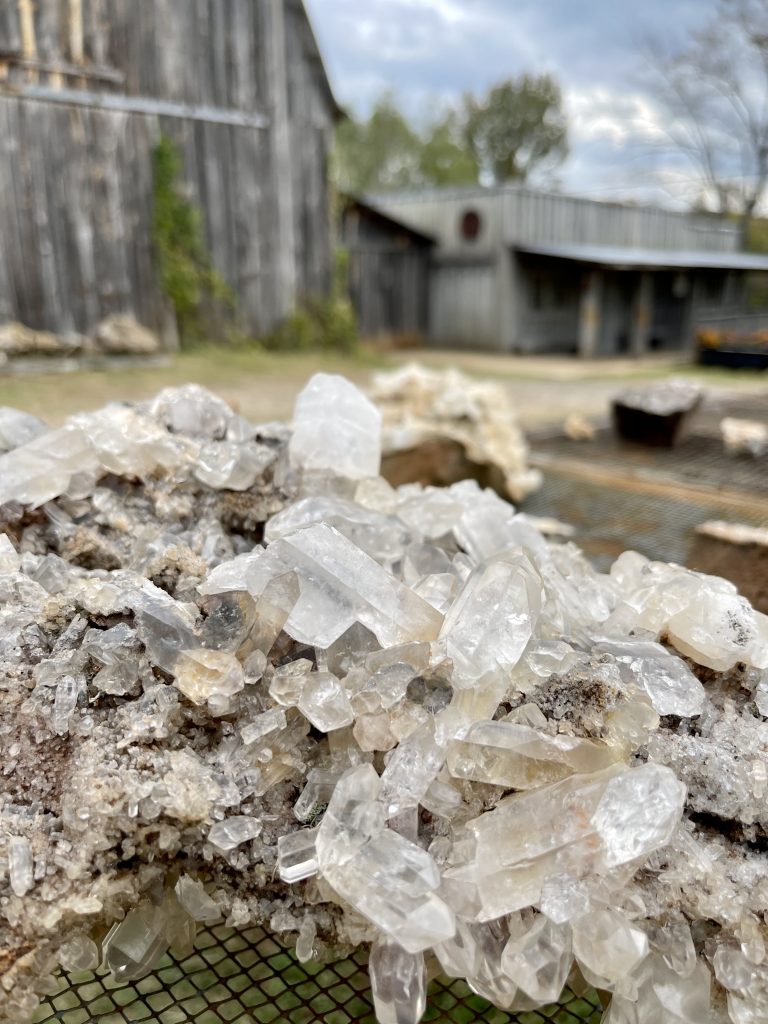 Check rock shops along the byways in the Ouachita Mountains for local quartz and collectible minerals, like this cluster of crystals unearthed at Wegner Crystal Mines in Mount Ida.

The bucket is too heavy. A man in his mid-50s, navigating heaps of red clay at Wegner Crystal Mines in Mount Ida, has to set down his 5-gallon bucket and readjust his position, wiping afternoon sweat from his brow. On the way to his vehicle, a Tahoe with Ohio plates, he tells a young couple headed toward the dig-your-own crystals site, “This bucket is full! You wouldn’t believe how many we found. Some huge ones, too. They’re all over!”

Quartz crystals are indeed “all over” dozens of Arkansas mines, most of them concentrated in the mineral-rich Ouachita Mountains. Arkansas may sometimes be called “The Diamond State,” but quartz crystal is the official State Mineral.

An Arkansas Geological Survey brochure, “Arkansas Quartz Crystals,” reports that when explorer Hernando de Soto arrived in the area in 1541, his men discovered quartz weapon tips used by American Indians. The greatest concentration of quartz is in a 30- to 40-mile-wide band through Central Arkansas extending to eastern Oklahoma, largely overlapping the Ouachitas.

Quartz mining in Arkansas began about 200 years ago, but geologists say most Arkansas quartz crystals formed around 200 million years ago. Although every quartz crystal is millions of years old, until that moment of unearthing, it has never been seen by human eyes.

Sparkling in the Smithsonian

Last October, a stunning, 7-foot-tall piece of quartz was unveiled at the Smithsonian’s National Museum of Natural History. The gigantic cluster of thousands of sparkling crystals, named the Berns Quartz, came to Washington, D.C., from Ron Coleman Mining in Jessieville. At 8,000 pounds, it’s one of the largest pieces of quartz on display at any museum. At the unveiling, Kirk Johnson, museum director, said its dramatic appearance makes it one of the “most striking visual experiences in the museum,” and that the museum was thrilled to have it join such iconic pieces as the Hope Diamond and the museum’s Tyrannosaurus rex.

Arkansas’ world-famous quartz runs the gamut. The spectacular Berns Quartz is one of many enormous pieces of crystal found by professional miners, some worth millions of dollars. Specimens of Arkansas quartz that fit on a windowsill can sell for thousands of dollars; others beautify flower beds. And while they carry some premium pieces, the rock shops that speckle Ouachita roadways often sell samples for less than a dollar. 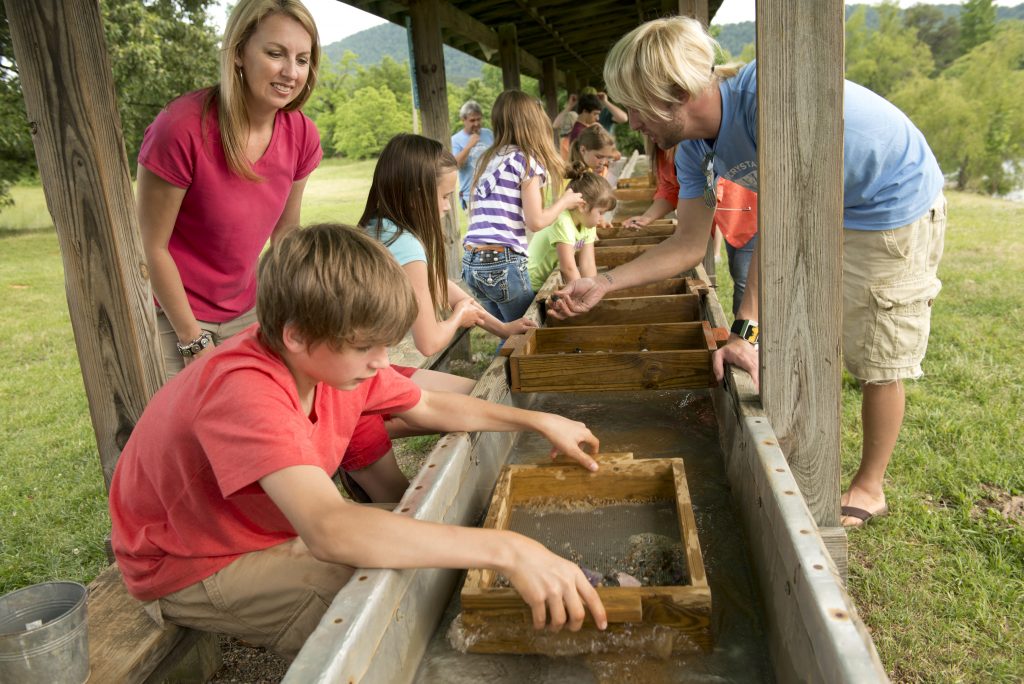 Families try their hand at the Gemstone Sluice at Wegner Crystal Mines. Purchased pails of mineral-rich dirt get washed off in the sluice to discover finds, ranging from quartz to emeralds to Megalodon shark teeth. 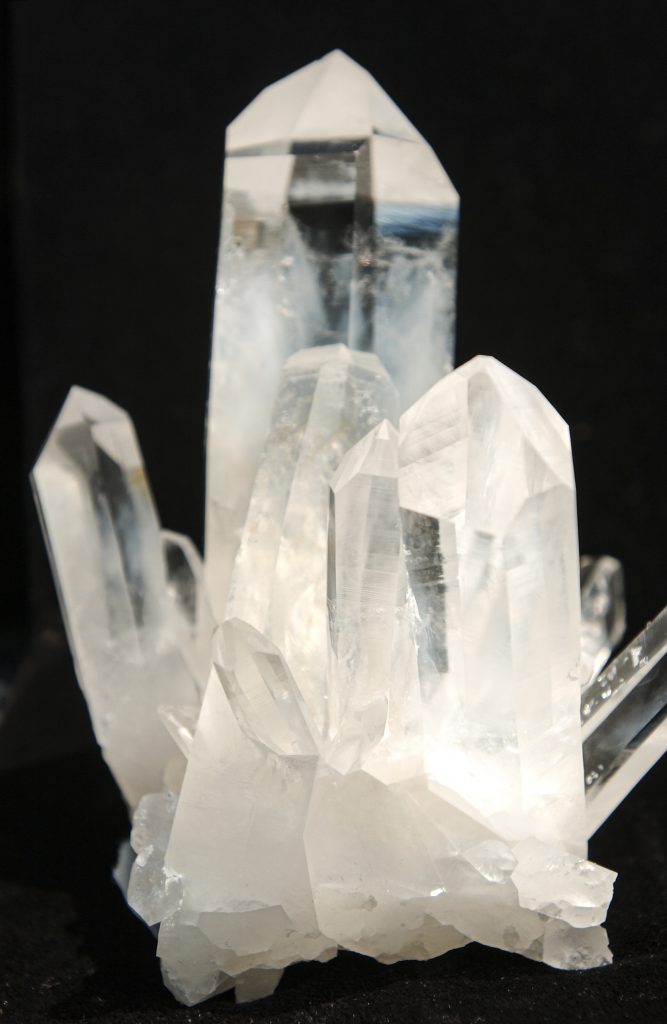 Crystals found in Mount Ida, looking pristine after a proper cleaning. A three-day soak in oxalic acid helps remove the rusty tint found on many.

Can y’all dig it?

Recreational crystal mining is a big tourism draw for Arkansas. At the many pay-to-dig crystal mines, parking lots are often packed with out-of-state vehicles, sometimes outnumbering the Arkansas plates.

Richard Wegner, owner of Wegner Crystal Mines, says business was booming before the pandemic and hasn’t slowed. Since the experiences are almost completely outdoors, he says customers have felt free to enjoy themselves.

A line on the website for Twin Creeks Mine in Mount Ida also highlights this advantage: “187 acres of social distancing, can y’all dig it???” 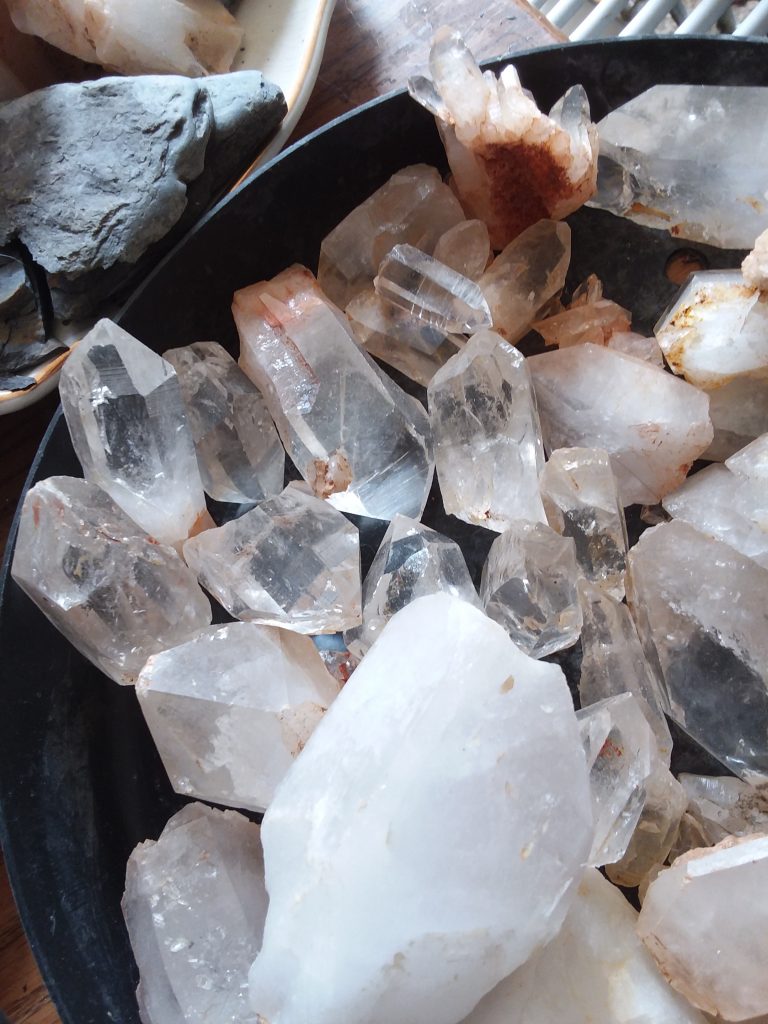 Crystals hand-mined by Kristina Tilley and Xavier Sixwings in Mount Ida and Jessieville.

Ron Coleman Mining, which excavated the Smithsonian’s Berns Quartz, is a five-generation family mining operation with a dig-your-own crystals experience available for the public. Tresa McFarlin, a manager, says, “We have young couples, and we have people in their 60s, even 80s, who come out every month to find more crystals. Some people who came here when they were 2 years old are now bringing their own children.”

Some mines have wheelchair-accessible areas or offer private digging areas for groups. Small children often get free admission, where adult admission ranges generally between $18 to $25 for a few hours of digging. Call or review the mines’ websites before showing up, so you know your options and what to expect.

Bobbie Bowles is a self-proclaimed rockhound (an avid collector of rocks and minerals). Last fall when she went crystal mining for the first time, the experience took her by surprise. She’d driven from her home in Mulberry to meet some family members at the Avatar Mine, a dig-your-own crystal mine in Mount Ida.

“I thought we’d pay $25 and dig and find a handful of broken crystals. Not a lot, but at least we could say we did it,” Bowles says. After all, she’d enjoyed the Crater of Diamonds State Park in Murfreesboro, where she found some cool jasper but no diamonds after hours of searching. She thought crystal mining would be similar. “But, it wasn’t a matter of if you find stuff,” she says. “It was a question of, ‘How much will you find?’”

In 3 to 4 hours, Bowles says, “We found everything from small ones that I’ll use in jewelry, to very large pieces that are about the size of half a basketball. We had a blast.”

One big moment for Bowles: It had rained shortly before her trip, loosening the crystals. “My mother-in-law found a perfect phantom crystal just lying on the ground in the parking lot. It had washed down the hill,” she says. “It’s the perfect size for a necklace. The owners were super excited for her and posted a picture of it.”

Phantom quartz contains magnesium deposits in the middle, forming a dark shadow inside the clear crystal. One of the Wegner mines that visitors can access is known for its concentration of phantom crystal deposits.

McFarlin says, “Every mine is different. You will find different types of crystals at every one. They’re quite varied. Crystals are measured like diamonds: clarity, color and weight.” Some crystals are perfectly clear. Iron can make other crystals pink. Magnesium creates dark crystals. 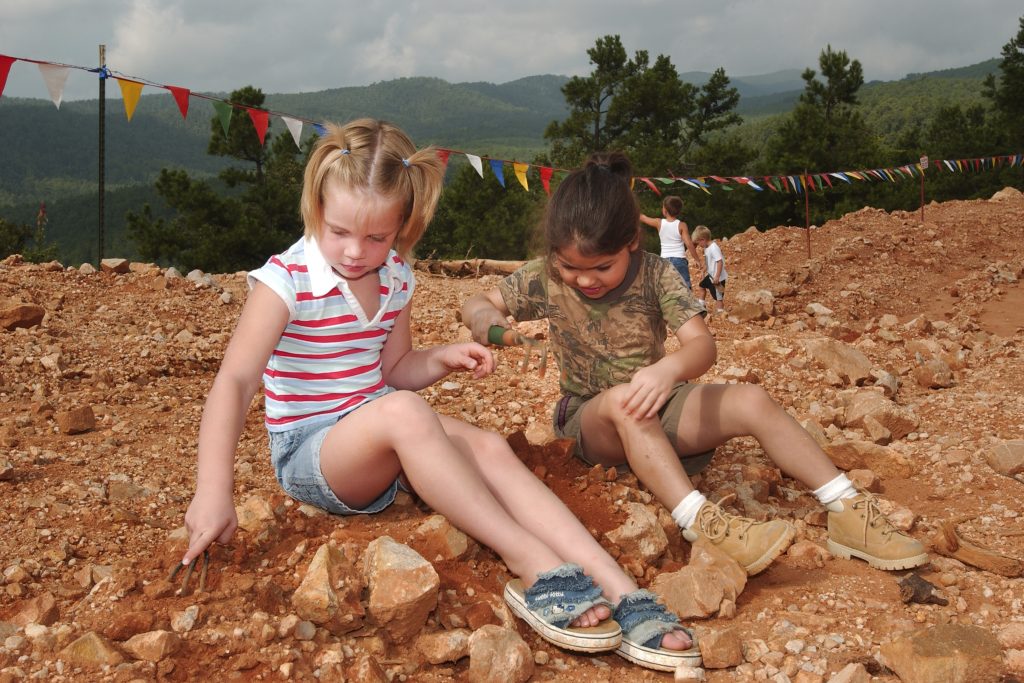 In tailings areas of tourist mines, guests can search for crystals in spots heaped with quartz-rich dirt dug up in commercial mines.

Spring Break through the summer is the peak season, but some mines stay open all year.

Bring your own tools for digging. Some mines sell the basic tools for a few dollars. Crowbars and elaborate tools aren’t required. McFarlin’s recommended items to pack: a small spade and garden hand rake or claw tool, a sturdy bucket, heavy work gloves (because, she warns, “Crystals can cut!”), sunglasses and a hat or other sun shade. Some people bring small rock hammers or screwdrivers. Food and drink are available for purchase at some places, but bringing a cooler with water and snacks is smart.

McFarlin says, “We have some people who bring kneeling pads, and a lot of people will bring Visqueen to sit on because they don’t want to get dirty. But most people don’t care and get right in the middle of it. We do suggest people come wearing clothes and shoes that they don’t mind getting stained, because they are going to.”

Some mines have options for mining directly from the open pits. At many, the public option is a “tailings” area, where the dirt is soft, already removed from the mine. A backhoe regularly excavates truckloads of fresh dirt, rich with crystals, for visitors to search. The heaps of red clay are turned frequently so that the crystals on the bottom end up nearer the top. 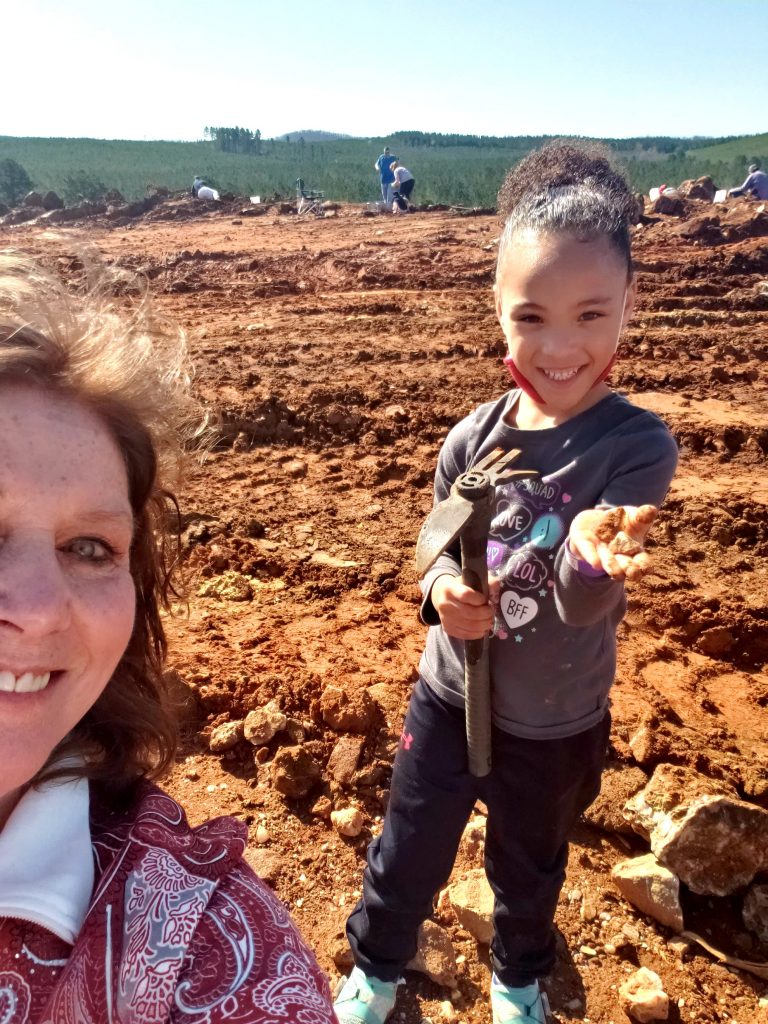 “I found one!” Kai Ferguson, 5, is proud of her first discovery at Ron Coleman Mining in Jessieville.

Wegner says, “One of the best tips is to come after a really hard rain. The crystals become exposed all over the surface. After a hard rain, when the sun comes out, it’s pretty amazing.”

Crystals often aren’t obvious to amateurs before they’re cleaned, so McFarlin advises, “Take a moment to use your glove and clean it off to make sure you’re not discarding something that’s amazing.”

McFarlin recommends washing dirt and clay off crystals with a hose, then soaking them for about three days in oxalic acid (available at the mines or hardware stores). “You have to clean them until there’s no film on them,” she says. “Otherwise, they turn out looking yellow.” 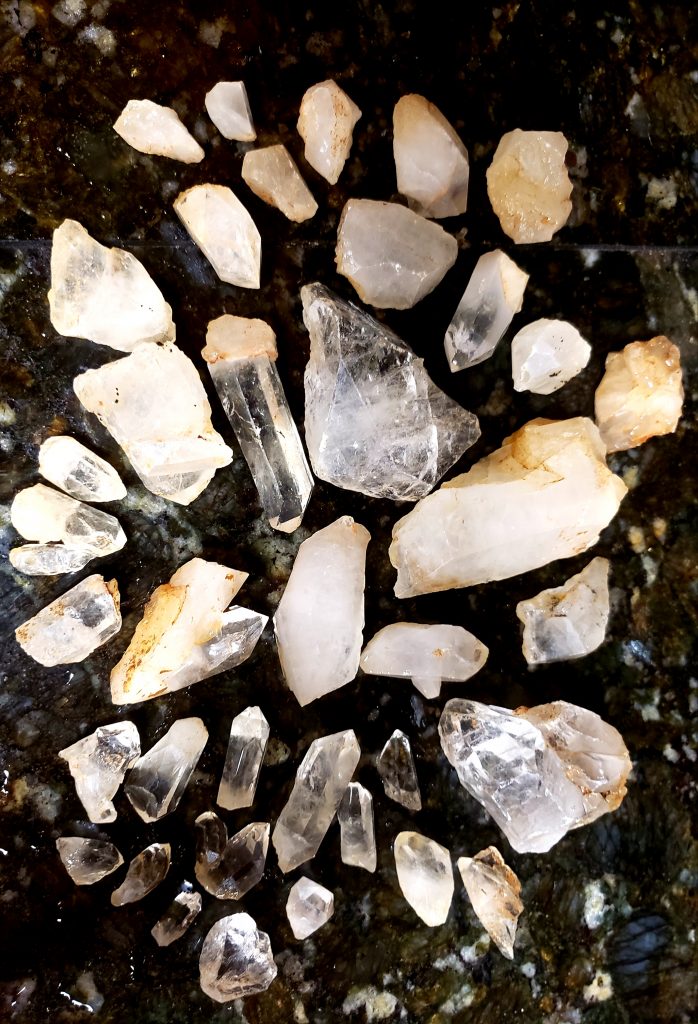 The collection of crystals found by Cathy Messer and her granddaughter, Kai Ferguson of Sherwood, in a single day at Ron Coleman Mining.

Wegner says that customers don’t even have to dig.

“In fact, I don’t really encourage it,” he says. “I would have a long-handled tool, maybe a garden claw, then just start walking up and down those furrows and working the sides over a little bit to see what rolls out. You can get a bucketful of crystals like that a lot quicker than you can sitting and digging in one spot.”