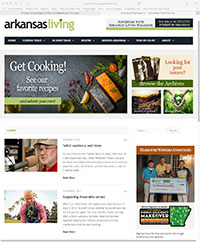 Arkansas Living has a new website, www.arkansaslivingmagazine.com. The site features content from the print magazine, as well as bonus material including photos and video. The magazine’s popular recipes will be highlighted, and readers can use the site to submit their own recipes for consideration for the print magazine. Events can also be submitted through the site for the magazine’s Around Arkansas calendar. In addition, the website is mobile-friendly, which will make it easier to access the magazine’s content digitally.

Portable electric generators can offer many benefits when a long-term electrical outage occurs due to a storm. However, if generators are not used properly, things could turn deadly.

After Hurricane Katrina, for example, many people relied on generators. But the misuse of them caused five deaths, according to the Centers for Disease Control and Prevention (CDC). The CDC also reported 51 cases of carbon monoxide poisoning.

Follow these tips to prevent misuse of portable electrical generators:

• Be sure to follow manufacturers’ directions for installation and operation.

• To prevent electric shock, make sure your generator is properly grounded. The operation manual should provide correct grounding procedures.

• Use the generator only in a well-ventilated and dry area located away from air intakes to the house. Do not use a generator in an attached garage.

• Individual appliances should be plugged directly into the receptacle outlet of the generator using appropriately sized extension cords to carry the electric load. Make sure the cords are rated for outdoor use, have a grounded, three-pronged plug, and are in good condition.

• Do not run extension cords under rugs.

• Never connect generators directly to your home’s wiring. The reverse flow of electricity can electrocute an unsuspecting utility worker.

• Never plug a generator into a household outlet.

• Do not refuel a generator while it is running.

• Only store fuel outside of living areas and away from heat sources like water heater pilot lights.

• Turn off all equipment powered by the generator before shutting it down.

• Keep children and pets away from generators. 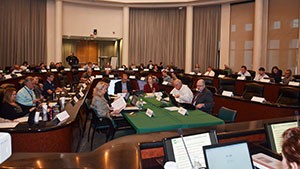 Participants at the NERC GridEx III at the Electric Cooperatives of Arkansas offices in Little Rock.

According to Duane Highley, president and CEO of AECC/AECI, the GridEx III exercise was a national drill that included two days of live distributed scenarios and an executive tabletop discussion. GridEx III included representatives of electric utilities and multiple local, state and federal government agencies from throughout the United States, Canada and Mexico. The exercise involved simulated cyber and physical attack scenarios, which were designed to increase coordination and preparedness among members of the electric sector throughout North America.

“Our mission is to provide our 17 electric distribution cooperatives in Arkansas with reliable and affordable wholesale electricity service. Simulated exercises such as these allow our staff to practice our contingency and response plans, improve those plans, and hone our skills to be prepared for potential future events,” Highley said. We also use this opportunity to improve our coordination capabilities with multiple industry sector partners at the local, state and federal levels.”

AECC and AECI officials work throughout the year to stay abreast of threats to the national, regional and state electricity infrastructure. The Electric Cooperatives of Arkansas were the only state-regulated electric providers in Arkansas that participated in the exercise. “We value our partnerships with government and industry organizations in our efforts to ensure the highest level of reliability in the event of a cyber or physical crisis,” Highley said. “An exercise of this magnitude is invaluable to maintaining the integrity of the electric grid and being prepared to efficiently respond to attacks in today’s environment.”