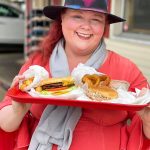 Take the heat of summer, pair it with your favorite outdoor pastimes, and stir in some nostalgia. What do you get? A nice, hearty appetite for an Arkansas homegrown favorite, the dairy bar.

Popular all the way back to the 1930s, these restaurants serve ice cream and fast-food delights through an order window, allowing you to eat at a picnic table or even in your car. Every community once had one of these neighborhood hangouts. Many of those classic drive-up operations are still thriving. 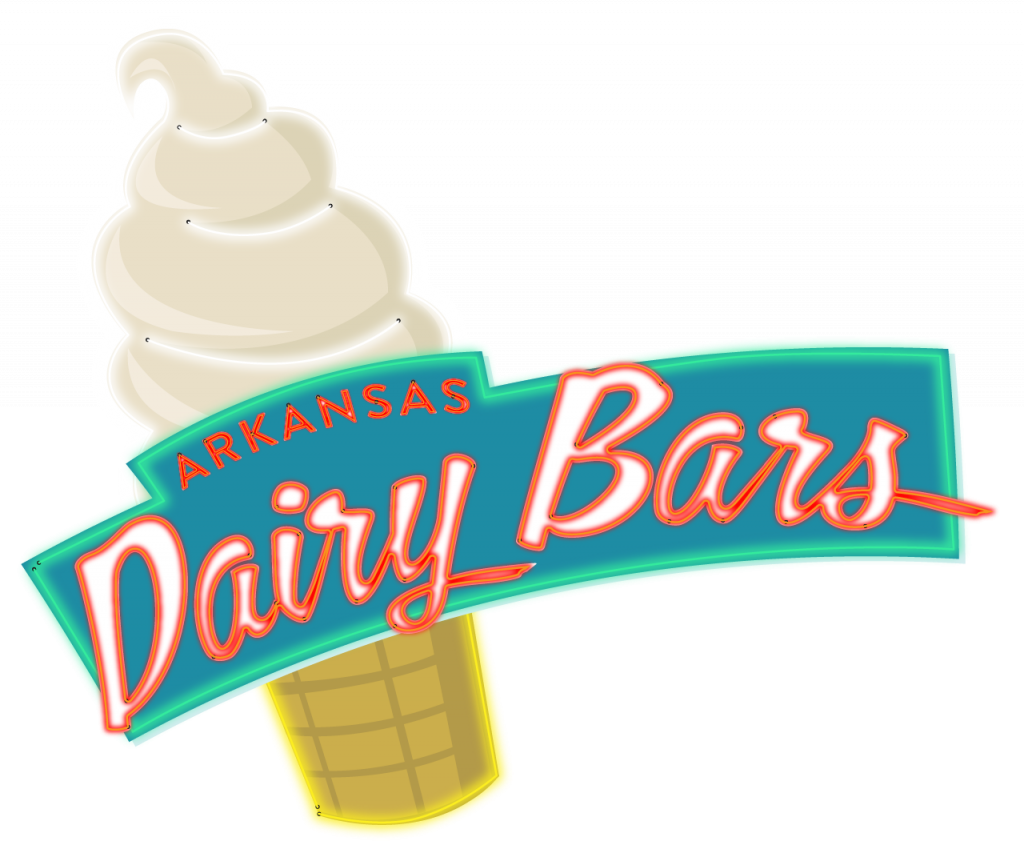 I’ve spent quite a bit of time seeking out the perfect hot dog, burger, shake and dipped cone all over Arkansas, many of which are featured in my documentary Arkansas Dairy Bars: Neat Eats and Cool Treats on Arkansas PBS. During this time, I’ve visited every one of Arkansas’ 90-plus mom-and-pop shops to learn the stories behind them. They’re all covered in my book (which is also called Arkansas Dairy Bars) — the hot summer read aimed at encouraging each and every one of you to hit the road and find your favorite. Here are some excellent dairy bars to add to your summer vacation itinerary. 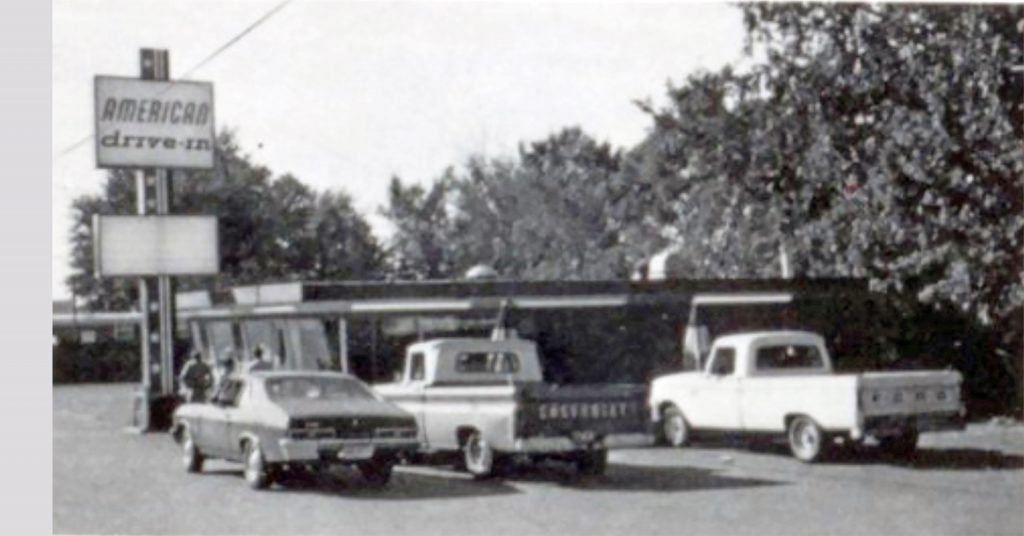 American Drive-In serves the “chickie dog” similar to a hot dog but with a chicken strip.

Originally opened as The Dairy Diner in 1958 by Bob and Lucille Beale, this tilt-windowed, stone-clad edifice sports a vast menu served under its bright red awning. The menu features burgers, hot dogs and even a “chickie dog,” where the hot dog is replaced with a fried chicken strip. The restaurant is also known for its dinners, which cover everything from shrimp to chicken gizzards, all served with french fries, coleslaw and Texas toast. Try the hot fudge sundae.

The tiny dairy bar on Park Avenue started out as Butchie’s in 1952 and went through a host of different names and menus through the years. For more than a quarter century, the Morphews have run this sweet spot with their own combination of great burgers, fried rice and ice cream delights, like their banana split served in a cup. An old friend of the restaurant, former President Bill Clinton, spent time here as a teenager. 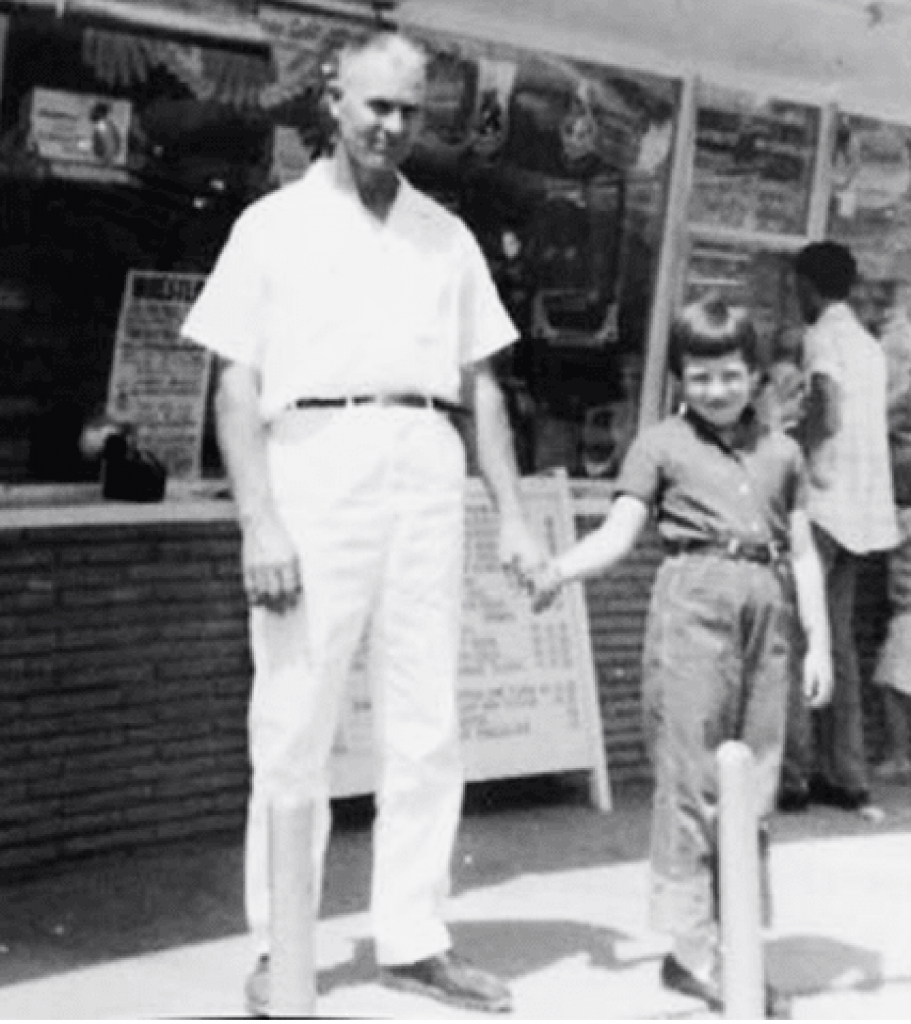 Ervie Barnett opened his old-fashioned, neon-clad dairy bar in 1957. It stayed in the family until 2017, when it was sold to local resident Jason Freese, who continues many of the traditions today. While the original shop sold doughnuts in the morning, today’s menu includes full-scale dining and goes all-in on hamburgers, different types of fries, hot dogs and a variety of ice cream confections.

Betty’s Old Fashion opened in 1934 on East Hillsboro Avenue in El Dorado and still stands on its original spot. The current proprietor, Betty Schaub, first started hanging out and helping out there at the age of 9 back in 1956. She became a full employee at 19 and, when previous proprietor Phil Schaff decided to retire, she bought the ice cream stand outright in 1976. Today, it’s not unusual to see a crowd at the two pick-up windows — for those excellent hand-patted burgers and dipped cones. 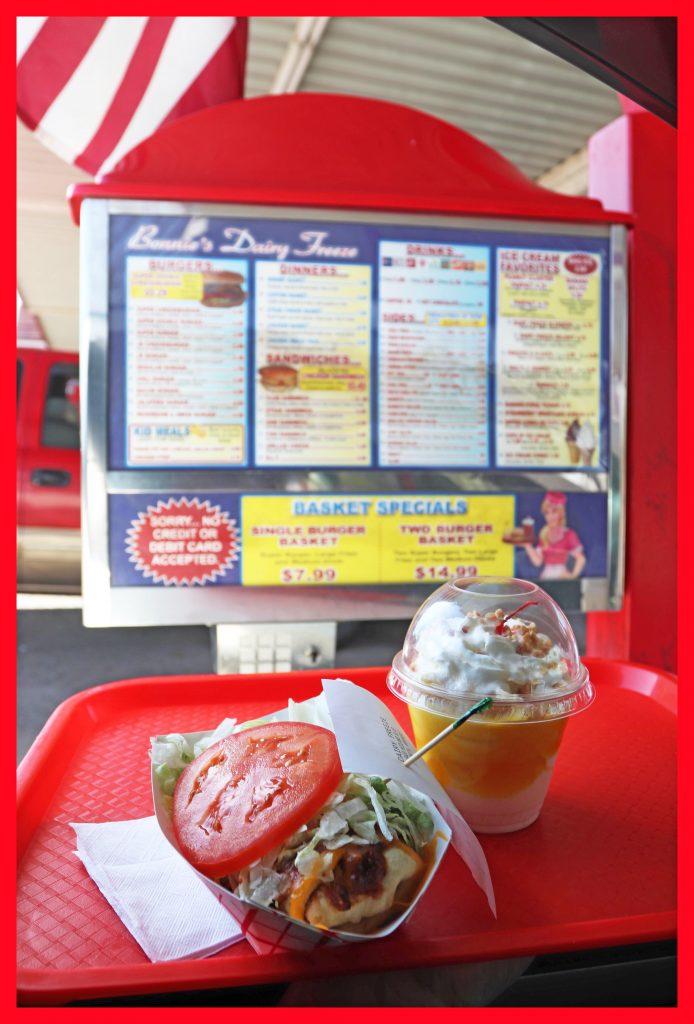 Since the 1940s, this button-order drive-in has served up a selection of burgers, hot dogs and ice cream delights. The original edifice faced Midland Avenue and offered eight burgers for a dollar. After a fire, it was reopened in its current location. The restaurant’s reputation stands on its large array of ice cream offerings and on trusty, excellent burgers. Dipped cones come in three flavors — chocolate, butterscotch and cherry.

A member of a once 100-strong franchise out of Oklahoma, Monticello’s location of the old Breaker Drive-In is believed to be the last of its kind. The name came from popular 1970s slang and citizens band (CB) radio usage. The term “breaker” was used to cut in and begin a CB radio conversation. These drive-ins had CB radios that drivers could connect with to place their orders on (Channel 19) before they got to the restaurant — two decades before cellphones allowed drivers to do the same thing. Though the CB days are a memory, this location survives, offering excellent burgers and sundaes. Be sure to try the Polish, a common lower Arkansas delicacy of a Polish sausage with the hot dog treatment.

Claiming to have the “Best Coke in Town,” this classic dairy bar has been a local favorite for more than 50 years. The extensive menu includes a selection of breakfast biscuit sandwiches, po’boy sandwiches and the Chuck Steak Sandwich — in this case, a country-fried beef patty. While you’re there, get a Flavorburst cone in one of more than 30 different varieties. 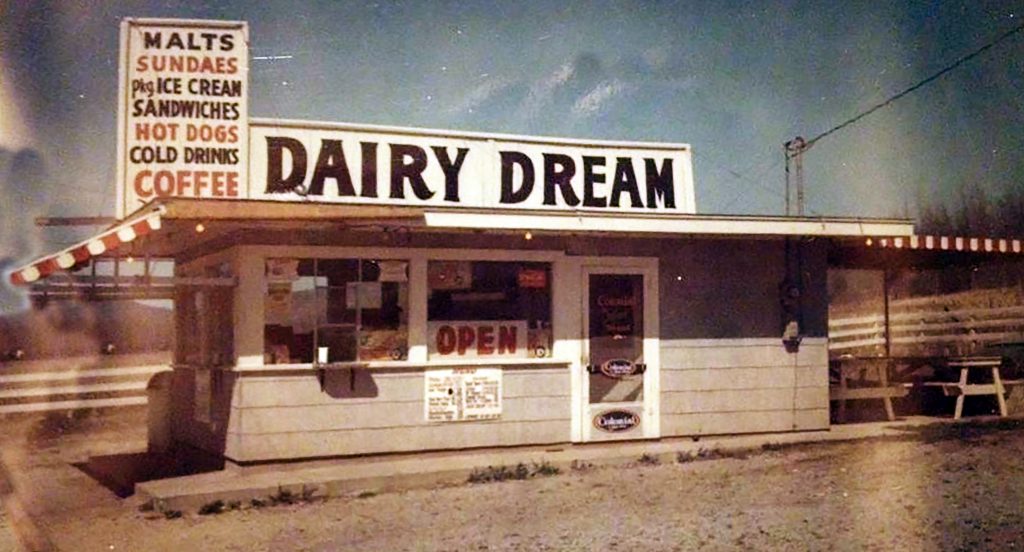 The Mountainburger, Silver Saddle and Baby Elephant are unique and popular menu items at the Dairy Dream.

Robert Willroth opened the two-window operation in 1954. The family still runs it today. Its Mountainburger is similar to a Sloppy Joe, with more meat and less sauce, served with mustard, pickle, onion and a slice of cheese. Get yours with a Purple Cow, Silver Saddle or Baby Elephant (they’re all drinks). Be sure to go in the summer, since the Dairy Dream is only open May to October each year. 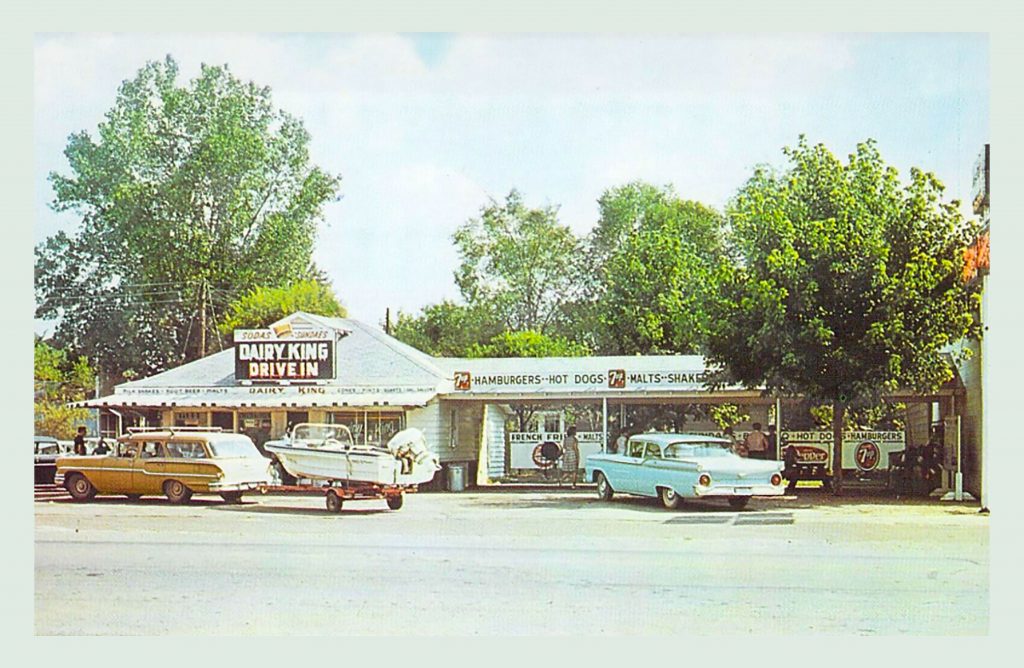 Portia’s Dairy King was inducted into the Arkansas Food Hall of Fame this year.

The original building back in the 1950s was a major stopping point for travelers along U.S. 63, with its classic burgers and shakes menu. It’s continued nonstop ever since and is now a plateholder for the Arkansas Food Hall of Fame. The menu features every manner of burger, hot dog and sandwich available, with weekend breakfasts, evening steak dinners, and anytime catfish baskets, plus fried pies, milkshakes and excellent dipped cones. Try the homemade potato chips. 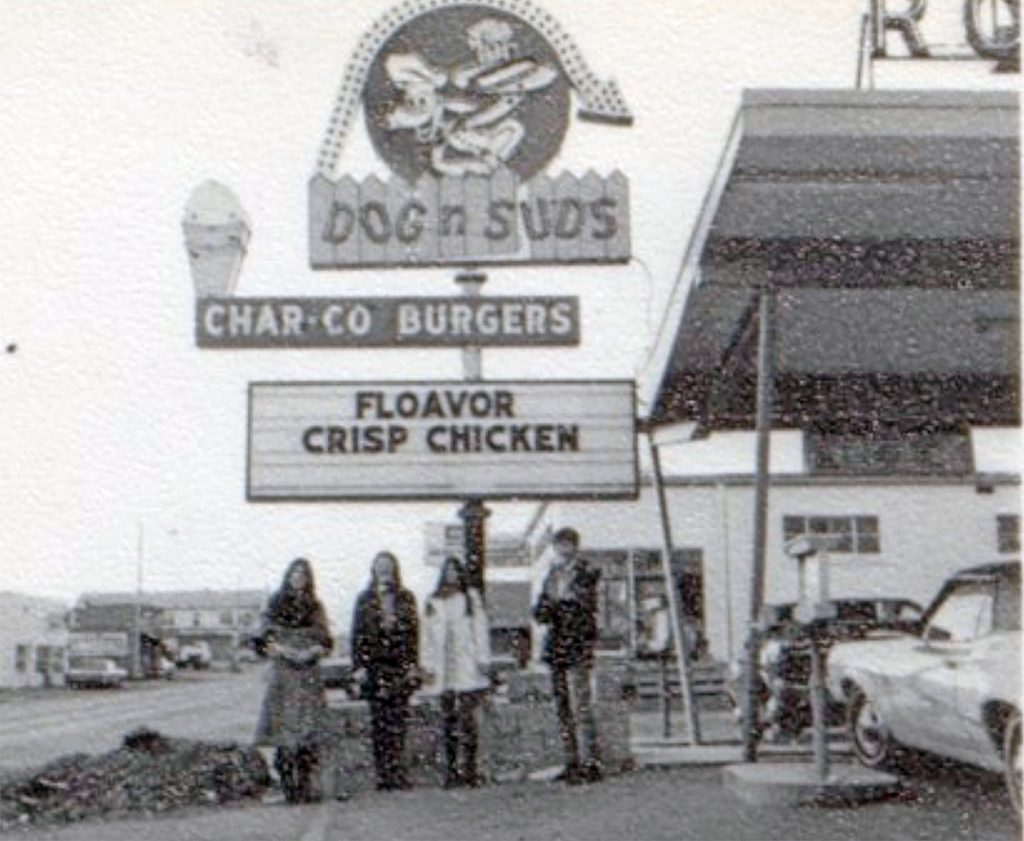 Don Hamacher and Jim Griggs opened the first Dog N Suds restaurant in Champaign, Illinois, in 1953. The franchise grew through the 1970s, with 650 locations across the United States. Today, there are just 17 locations left. The southernmost one is in Paragould, where you can still get burgers, root beer and hot dogs.

What makes this location unique is Salvadorean additions to the menu — pupusas filled with beans, cheese or lorocco ­— all of which go expertly well with creamy, frosty root beer. 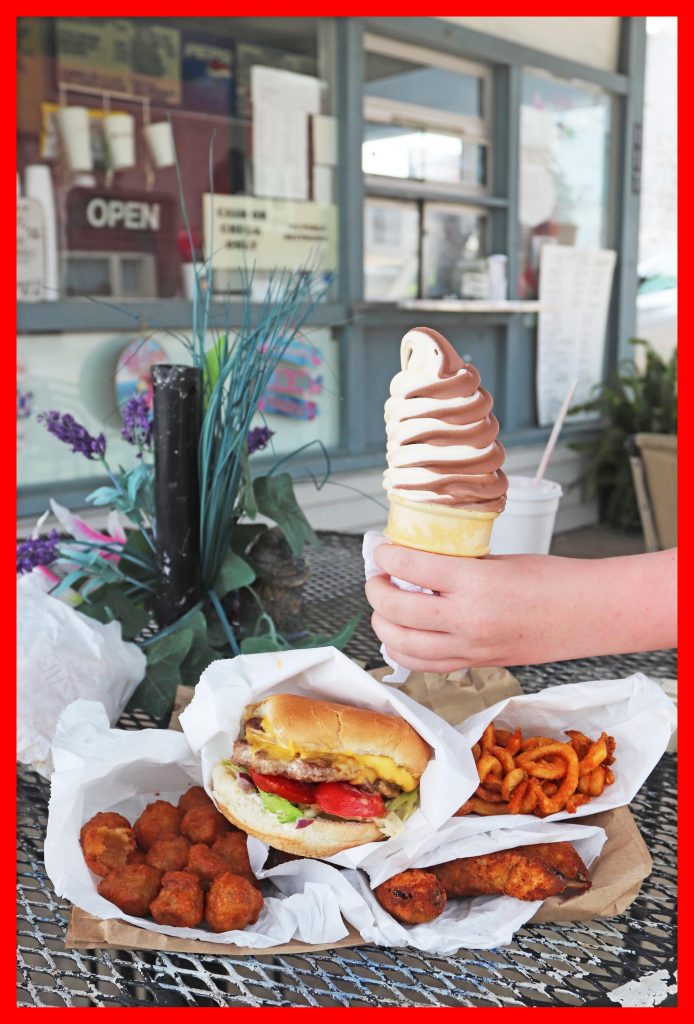 Garner’s Drive In has an extensive menu, including Irish Fries and The Bomb.

The original flat-top Dari Delite, which opened in 1957, looks a little different now, with a later-added peaked roof and a paint job. But it’s still the place to stop for ice cream when you get to Berryville. The menu is incredibly extensive, with burgers and hot dogs, fries and chicken sandwiches and unusual concoctions, such as Irish Fries and The Bomb (french fries topped with barbecued beef, cheddar cheese, ranch dressing and bacon). Ice cream delights like the Strawberry Twinkie in Paradise (similar to a strawberry shortcake, but with a Twinkie) and the Banana Express shake (with vanilla wafers) are unique and excellent choices.

The location began in the 1950s as a Zesto ice cream stand. When Taylor Freeze Company decided to scrap the Zesto stand concept, Herb’s was one of thousands of locations to go independent. Herb Candless innovated through the years — at times adding different concepts to his operation, from a Gulf gas station in the 1950s to a car wash in the ’60s and a pizza parlor in the ’80s. Though Candless passed away a few years ago, diners can still enjoy a Herb Burger or Herby Dandy at the red-and-white shop that bears his name.

First opened in 1952 as Sybil Bishop’s Lighthouse Cafe, a 24-hour-a-day operation for the Lighthouse Courts Motel, the Lighthouse property has also been home to a gas station and car wash. Most of the structures are long gone, but the lighthouse still stands, quite some distance from the dairy bar. The substantial menu includes the Hog Head Burger, the Hippo Burger, Ugly Nachos and Steak Fingers as well as more than 20 different shake and sundae flavors. 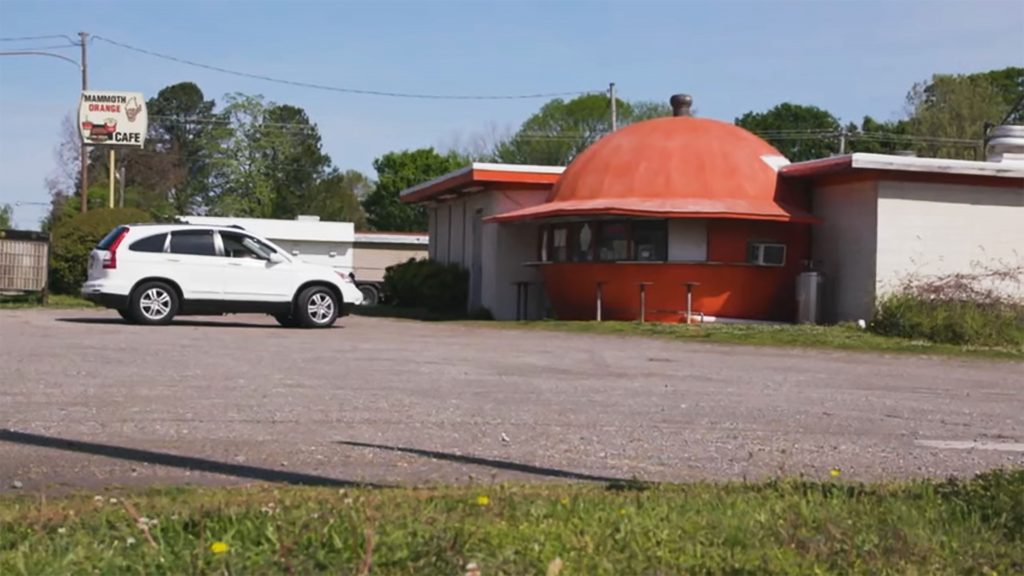 Mammoth Orange Cafe is easy to spot with its distinctive building.

Inspired by the Frank E. Pohl Giant Orange Cafes in California, Ernestine Bradshaw opened the Mammoth Orange Cafe in 1960 in Redfield. Three generations later, her grandson, Jock Carter, has assembled a crew to carry on the tradition of burgers and sundaes, along with daily lunch specials, served both inside and outside the definitive exterior. Be sure to try some of Jock’s marvelously rendered barbecue if it’s on the day’s menu. 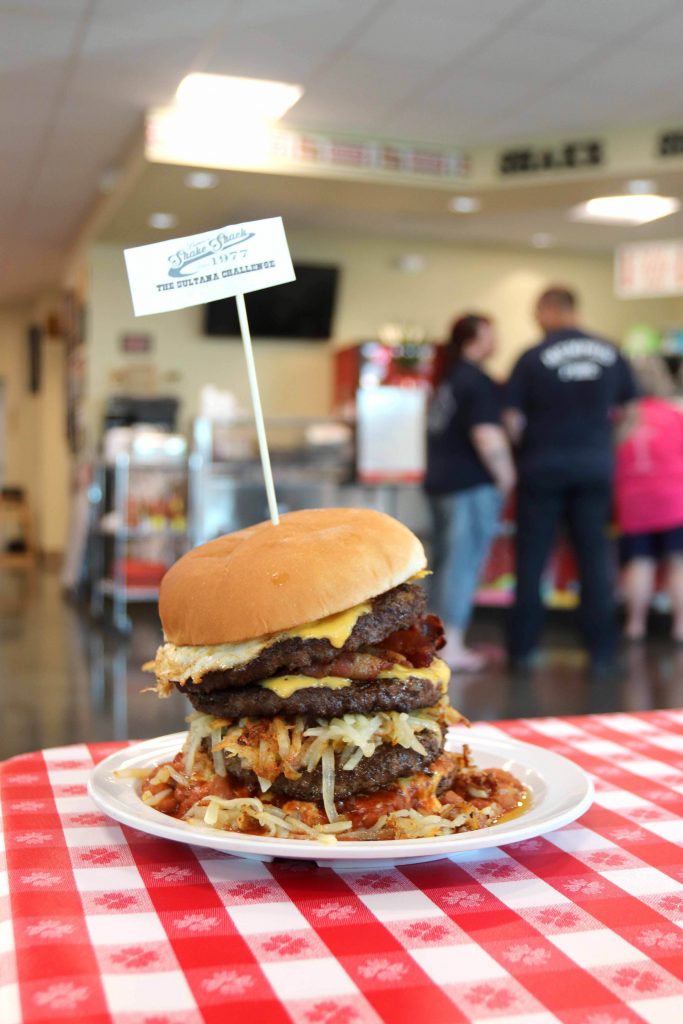 Diners who finish the four-patty Sultana Burger at the Shake Shack get their photo put on display.

John and Loretta Tacker started their burger-and-pizza stand in Marion back in 1977. Today, it’s in new, much bigger digs in what was the backyard of the original location, under the auspices of the Tacker’s son, Jeff. This is the place to get a host of amazing and sometimes ridiculous burgers, particularly the famed Sultana Burger — a four-patty tower with baked beans, hashbrowns, bacon, eggs and cheese that earns your photo a spot on the wall if you eat it all. 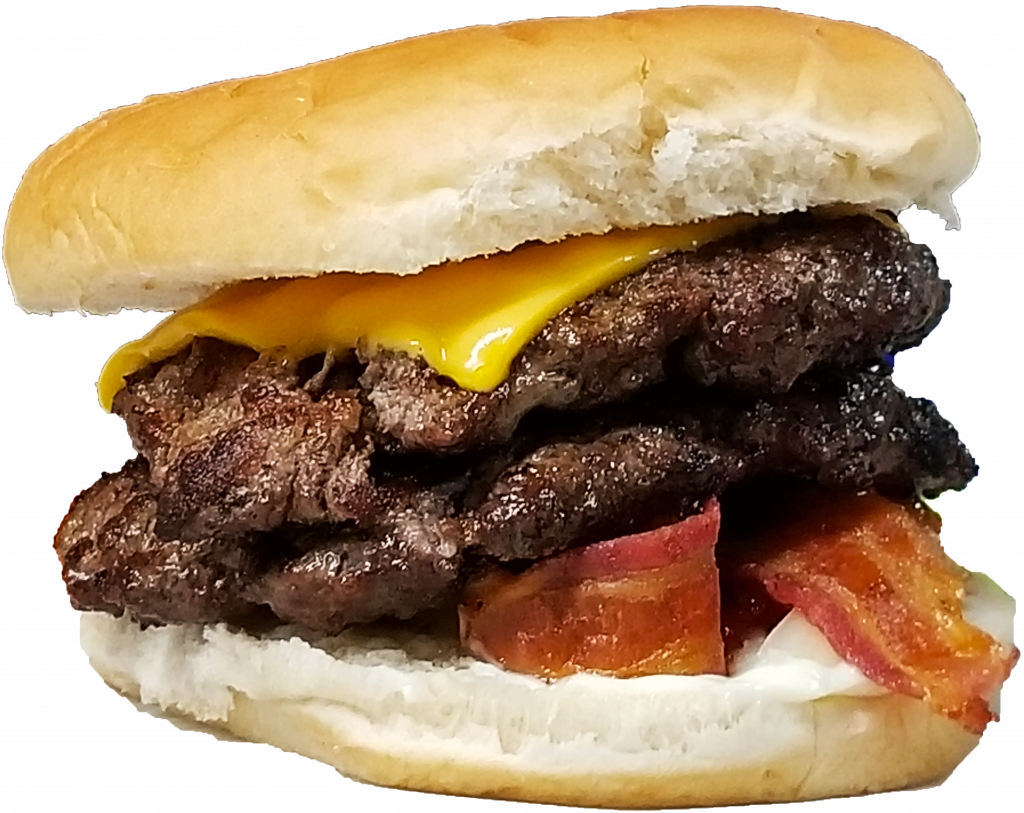 The Love Burger at Troy’s Drive-In is hand-patted and cooked over gas flames.

Stephanie Williams keeps this longstanding family dairy bar going with a committment to good food, adding dishes and serving the Love Burger, a hand-patted beef burger singed over gas flames that sometimes rise as much as 2 feet above the griddle. Her dedicated team serves not just customers at the window but pickup orders from local farms and lunches for an elementary school nearby.

Housed in an 1980s-style, sloped-roof shack, Willy’s has been a local favorite since its opening in 1986. Burgers here are salt-and-pepper spiced and generously topped with condiments of choice. Iqbal Singh’s operation has become well-known in the community not only for its burgers and shakes, but for the legendary “chicken box,” a packed box of chicken strips, plus cheese sauce for dipping.

The former Dairy Queen of the 1950s spent decades as Suttle’s Dairy-Ette before taking on the name of the local high school mascot. Its unusual double-wing, drive-up structure is a landmark at the busiest intersection in Sheridan. It’s known for great ice cream and the Double Hubcap Burger, a two-hander of a monstrosity that’s one of the largest burgers in the region.

Want to learn more about Arkansas’ wide array of dairy bars? Tune in to Arkansas PBS on June 9 at 7 p.m. for Arkansas Dairy Bars: Neat Eats and Cool Treats.