“There are about 200 decorating-related injuries each day during the busy holiday season,” says Ann Marie Buerkle, acting chairman of the Consumer Product Safety Commission (CPSC).

“It’s important to use common sense when you’re dealing with holiday decorating, particularly with lighting, candles and electrical wiring,” says Bruce Bouch, a U.S. Fire Administration fire program specialist. “Holiday decorations are designed for temporary use, and that means they are essentially disposable.”

According to the National Fire Protection Association (NFPA), the top three days of the year for candle fires in the United States are Christmas Eve, Christmas Day and New Year’s Day. NFPA statistics also indicate that one of four Christmas tree fires is caused by electrical problems.

The global safety certification company, United Laboratories, classifies holiday lighting as a seasonal product designed for no more than 90 days of use. While the holiday season runs about six weeks, weather and busy schedules mean outdoor lighting displays are put up early and taken down late, exposed to the elements the entire time.

“It’s always important to inspect holiday lights each year before you put them up,” Bouch says. “You may find that there are pinches or torn areas on the insulation.”

Open, exposed wiring or any signs of fraying or pinching are indications of weakened wiring. Those flaws are prone to breakage and may raise the potential for heat buildup, which can cause a fire.

Bouch recommends a thorough inspection of your holiday lights to identify potential hotspots and damage to the strings.

“When you’re checking everything on the wiring and fixtures, make sure you check for chewing damage from wild animals or your own pets,” Bouch adds. “Also look for signs that the insulation itself is wearing thin enough to expose wiring.”

The U.S. Fire Administration, the CPSC and other safety organizations also remind consumers that extension cords, whether labeled for indoors or outdoors, are also designed for temporary use.

“Your household wiring is a solid metal wire,” Bouch says. “Extension cords are strands of thin wires that are twisted together. That pliability can allow them to break over time, increasing the chance that they could fail within so many years.”

Experts also warn that candle use increases the risk of accidental fires, and suggest that consumers consider 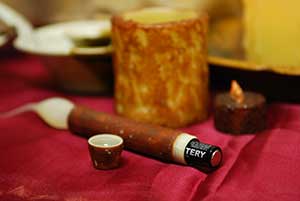 According to the National Fire Prevention Association, burning candles cause two out of five
home fires every year. Consider battery-operated LED candles as safer alternatives.

battery-operated LED candles as safer alternatives. According to NFPA, candles start two out of every five home fires each year, and about 100 Christmas tree fires occur each holiday season, causing about $12 million in damage annually.

You can reduce the risks by placing your Christmas tree away from heat sources, like vents or space heaters, and topping off the water reservoir daily.

Your local electric cooperative joins local firefighters, the NFPA and the CPSC in urging you to consider safety as you decorate and enjoy the holiday season with family and friends.