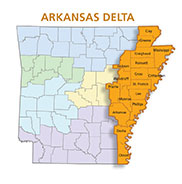 Exciting things are happening in the Arkansas Delta. For the second year in a row, Simmons Bank of Pine Bluff hosted an economic development conference to showcase the wonderful new education, employment, health, and “destination recreation” success stories in the region.

A distinguished group of speakers — ranging from Governor Hutchinson and other government officials to academics, physicians, and economic development leaders spoke at the May 9 conference leaders. Rex Nelson, then senior vice president and director of corporate communications for Simmons Bank, led the program.

Hutchinson noted that Big River Steel in Osceola, Hino Motors Manufacturing in Marion and Shandong Ruyi Technology Group in Forrest City are investing millions in manufacturing in Arkansas and have plans to provide more than 1,800 new jobs in the Arkansas Delta. These industries draw from the state’s agricultural resources (timber, cotton), low-cost electricity, water, plentiful and affordable land, and Arkansas’ wonderful people.  Arkansas is definitely gaining momentum in growing the economy in the Delta, but the speakers also stressed the need for creating a highly skilled labor force with computer coding abilities and other high-tech industry skills.

Beyond growing the manufacturing jobs, Arkansas Delta communities are also focusing on improving health, the speakers said. The two biggest challenges in this area are smoking and obesity, conference speakers said. The use of “telemedicine,” which brings doctors and health professionals to rural clinics via videoconferencing and computer technology, is on the rise. ASU’s College of Osteopathic Medicine in Jonesboro is making new inroads in the area of rural health. The facility’s staff train doctors to start practices in small towns and utilize the latest telemedicine technology. By placing these doctors on the front lines, all of the key health risk factors can be lowered. Tourism

Other speakers, like Chris Masingill, co-chair of the Delta Regional Authority, Robert Moore of the Arkansas Highway Commission, and Dr. Ruth Hawkins of Arkansas State University, stressed the importance of tourism — art, music, food, culture and history — all of which are abundant in Arkansas Delta communities and play a large part of the attraction to the Delta. Local cultural assets like these go hand-in-hand with business development and the economy, they said. Some of the cultural success stories in the Delta include the Johnny Cash Boyhood Home in Dyess and the Johnny Cash Heritage Music Festival, which the Electric Cooperatives of Arkansas helped establish; Lakeport Plantation in Lake Village; the restored Hemingway-Pfeiffer Museum and Educational Center in Piggott, and the Southern Tenant Farmers Museum in Tyronza. These tourism destination trips have brought bed & breakfast inns and hotels, restaurants and retail shops to the Delta.

“The seeds for growing a positive future for any rural community live within the community itself,” said J.D. Lowery, manager of community and economic development for Arkansas Electric Cooperative Corporation.

He reiterated the tourism and entrepreneurial potential of the eastern part of the state.  “We aren’t only looking for that big business that will relocate and bring 100 or 500 jobs,” he said. “We’re looking at how to create 10 or 100 vibrant local small businesses from within, that will support a family and each generate one to five additional new jobs. Tourism-based jobs are part of that equation.”