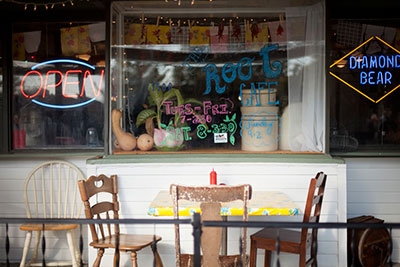 Don’t be discouraged if you arrive at The Root Cafe only to discover a line out the door. That just means it’s open. The small cafe in downtown Little Rock’s SoMa (South Main) district has a devoted base of fans for breakfast and lunch, but the line moves quickly.

Owners Jack and Corey Sundell opened The Root, as it is often called, in 2011. When they opened the restaurant it was almost fully funded, enabling them to invest profits directly back into their ingredients rather than into debt. Having the absolute freshest local ingredients was an integral part of their vision for the community they would create there. 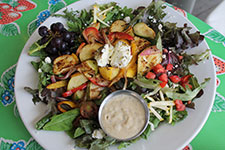 At The Root, the focus is on local foods: almost all of it is sourced from small Arkansas farms and ranches. Jack said the idea for the locally focused and sourced restaurant came from a combination of his time as a Peace Corps volunteer in a tight-knit Moroccan community and later working at the Heifer Project Ranch in Perryville, where almost all the food was produced on site.

The Sundells can articulate their cafe’s mission in five words: “building community through local food.” It starts with the cafe’s hand-picked Southern trappings — a quirky hodgepodge of unpretentious tablecloths, postcards, houseplants, vintage Grapette bottles, assorted cloth napkins and handmade fliers of local events. Nothing matches, and it is perfect. Drinks are served in Mason jars with a scoopful of ice from an old-fashioned cooler. The effect is quaint and relaxed, inviting countless Instagram photos.

With the exception of a very few condiments they use, pretty much everything on your plate came into being within a three-hour drive from the restaurant. Boy, can you tell. The food not only looks picture perfect, it tastes approximately 200 percent better than food has any right to taste.

Locally raised beef, a freshly baked bun, and Arkansas fixin’s make The Root’s burgers among the best in the state.

The Root has plenty of vegetarian, vegan and gluten-free options, as well as some of the best meats you’ll find in the state. For meat-lovers, the plump burgers and brats are stars of the menu. The third-pound hand-pattied burger comes from pasture-raised beef at Simon Farms in Conway. The brats, likewise, are from pasture-raised pork from Freckle Face Farms in Searcy. Buns and sandwich breads are baked fresh from scratch at Arkansas Fresh Bakery in Bryant, and most entrees are accompanied by a small side salad of fresh mixed greens from Arkansas Natural Produce in Malvern. Everyone loves the fries, with the most popular option being a half-and-half basket of hand-cut regular and sweet potato fries, served with ketchup and their original Hickory Chip mayo.

At lunch, be sure to order a dessert when you get to the front of the line, because you will not want your meal to end. The Root seems to always have a delightful new dessert you haven’t tried — this visit, it was the heavenly light lemon cake topped with fresh blackberries. When in doubt, the still-warm-and-gooey homemade chocolate chip cookies are large, perfect and available daily. No one regrets those cookies.

In the past year or so, The Root has gone from a favorite downtown Little Rock spot to a buzzed-about business model at an entirely different level. The cafe was featured nationally in “Growing America: A Journey to Success,” a limited series on CNN’s Headline News Network hosted by Extreme Makeover’s Ty Pennington. On the show, star students pursuing their masters of business administration put their best efforts into improving a local business. Root Cafe was one of the businesses featured, and was ultimately chosen by fans in a nationwide online contest to receive not just a week of the MBA students’ expertise, but also the $25,000 grand prize towards enacting their recommendations. Similarly, when the Sundells applied for a “Mission Main Street” grant from JPMorgan Chase, The Root won $150,000 to expand its facilities. The kicker? They were selected from a pool of more than 20,000 applicants nationwide. You could say their secret’s out.

Jack and Corey used the funding to expand the dining room and the kitchen. With the expanded facilities, they hope to begin offering dinner service by the end of the year. One thing the expansion isn’t expected to change — the lines out the door could get even longer. Whatever you do, don’t let that discourage you from getting in line.