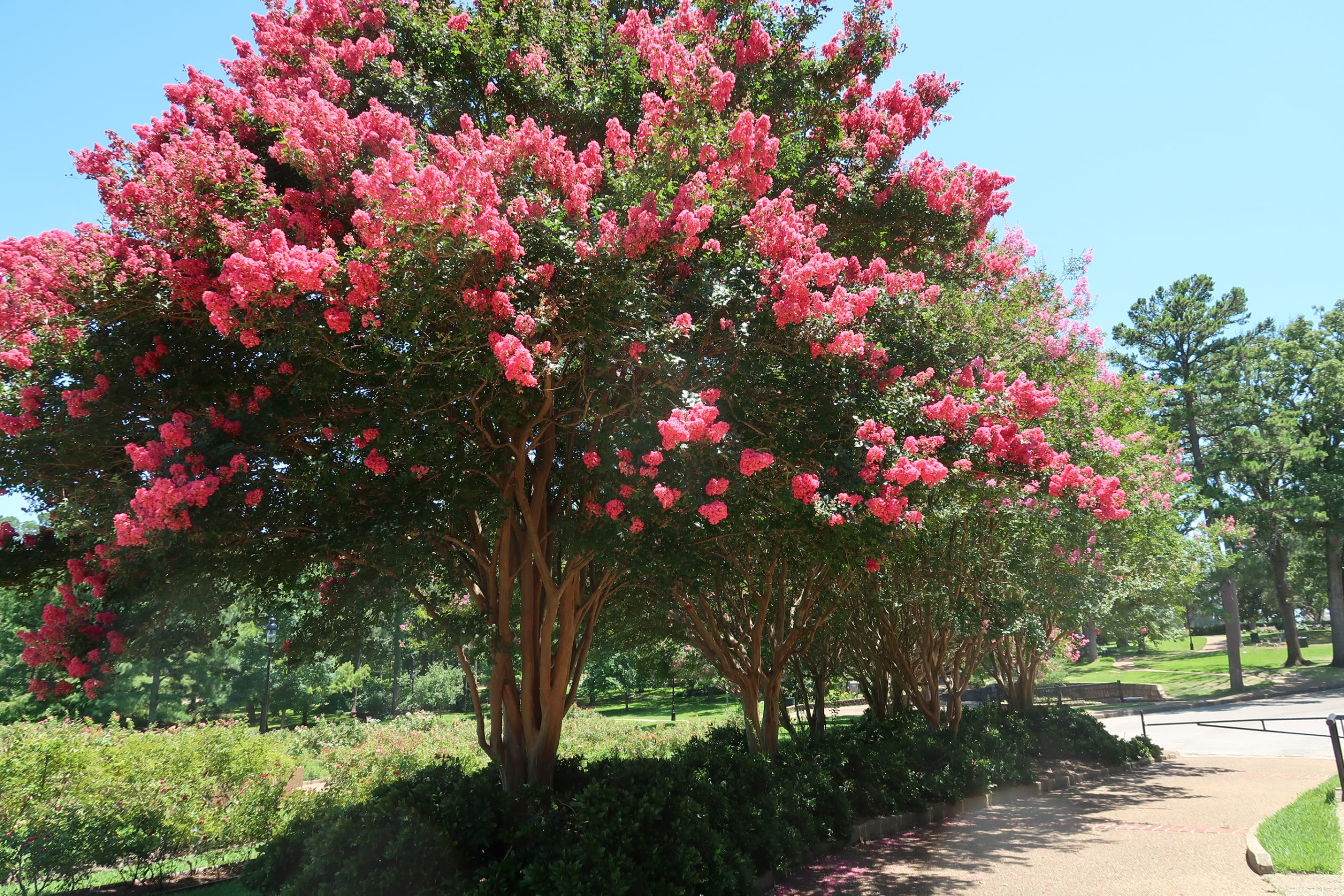 A Southern summer staple, properly pruned crape myrtles are tree-formed plants with vibrant blooms. All photos by Janet B. Carson

Travel anywhere in the South and you will find butchered crape myrtle trees. Crape murder is a trend that continues despite the best efforts of horticulturists. Standard crape myrtles have the potential to be wonderful small trees, being as pretty in the winter with their beautiful structure and form, coupled with peeling, colorful bark, if they aren’t chopped to their knees annually.

Crape myrtles bloom on new growth, so any pruning that is needed should be done prior to new growth beginning — typically from mid-February through mid-March. Crape myrtles are often some of the last plants to begin growing in the garden. While some gardeners begin pruning in the fall after the leaves have fallen, avoid this. The extra growth is a buffer for any potential winter damage, which can then be pruned off as new growth begins. Well-established and well-structured plants may not need annual pruning. Pruning to build structure while the trees are young, will give the form you need and require less pruning when the trees are older. 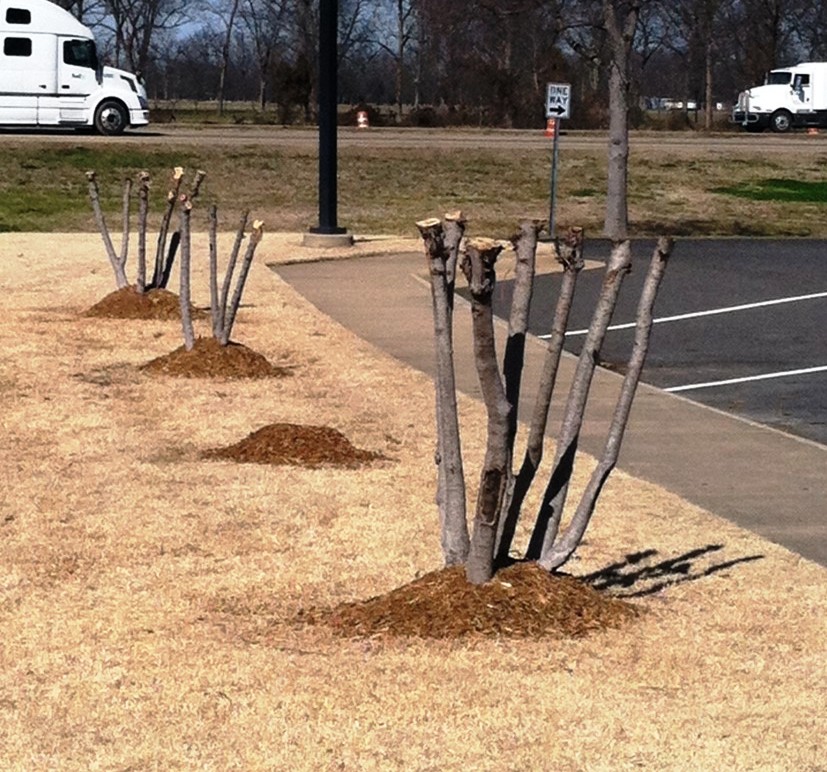 Crape myrtles can eventually overcome the damage done from shearing and topping.

For most standard crape myrtles, choose three, five or seven main trunks. Odd numbers give a more natural-looking form than even numbers, which often line up like soldiers in formation. You don’t want too many canes (trunks) or eventually things are going to get pretty crowded as the canes mature. Prune out any additional canes or suckers as close to the soil line as possible. Cut the suckers off as they appear as close to ground level as possible. Suckers compete for nutrients, water and sunlight, so remove them as you see them. Don’t use herbicides to kill suckers, since they are attached to the mother plant, and weed killers could damage crape myrtles.

Grown as a tree, branching should begin 6 to 8 feet off the ground. The goal is to have the upper branches growing in different directions to give a full tree canopy. Help direct where branches grow by making pruning cuts slightly above a bud that is facing the direction you want your new branch to grow. Avoid limbs that cross back through the plant or rub against each other. Wind movement and growth can cause these branches to wound each other, and you will eventually lose one or both. 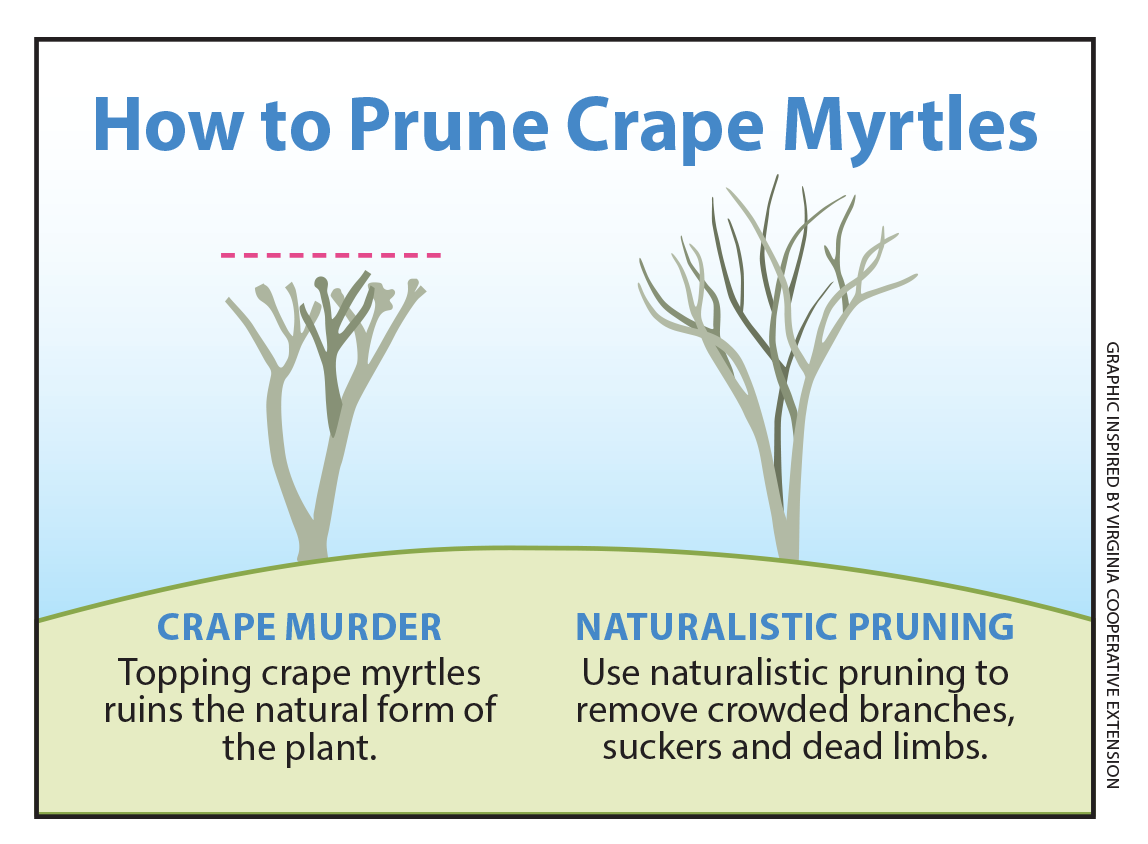 Prune to stronger canes — remove any growth smaller than a pencil in diameter. Smaller stems will result in weak new growth, which will have a difficult time supporting flowers. Open the plant up by removing excess branches on the interior of the plant. This will allow better air circulation and sunlight penetration, and can reduce disease problems and produce more flowers.

Naturalistic pruning will create a graceful tree-formed plant. The plant should begin flowering earlier, and have more flowers that are held upright on their branches. 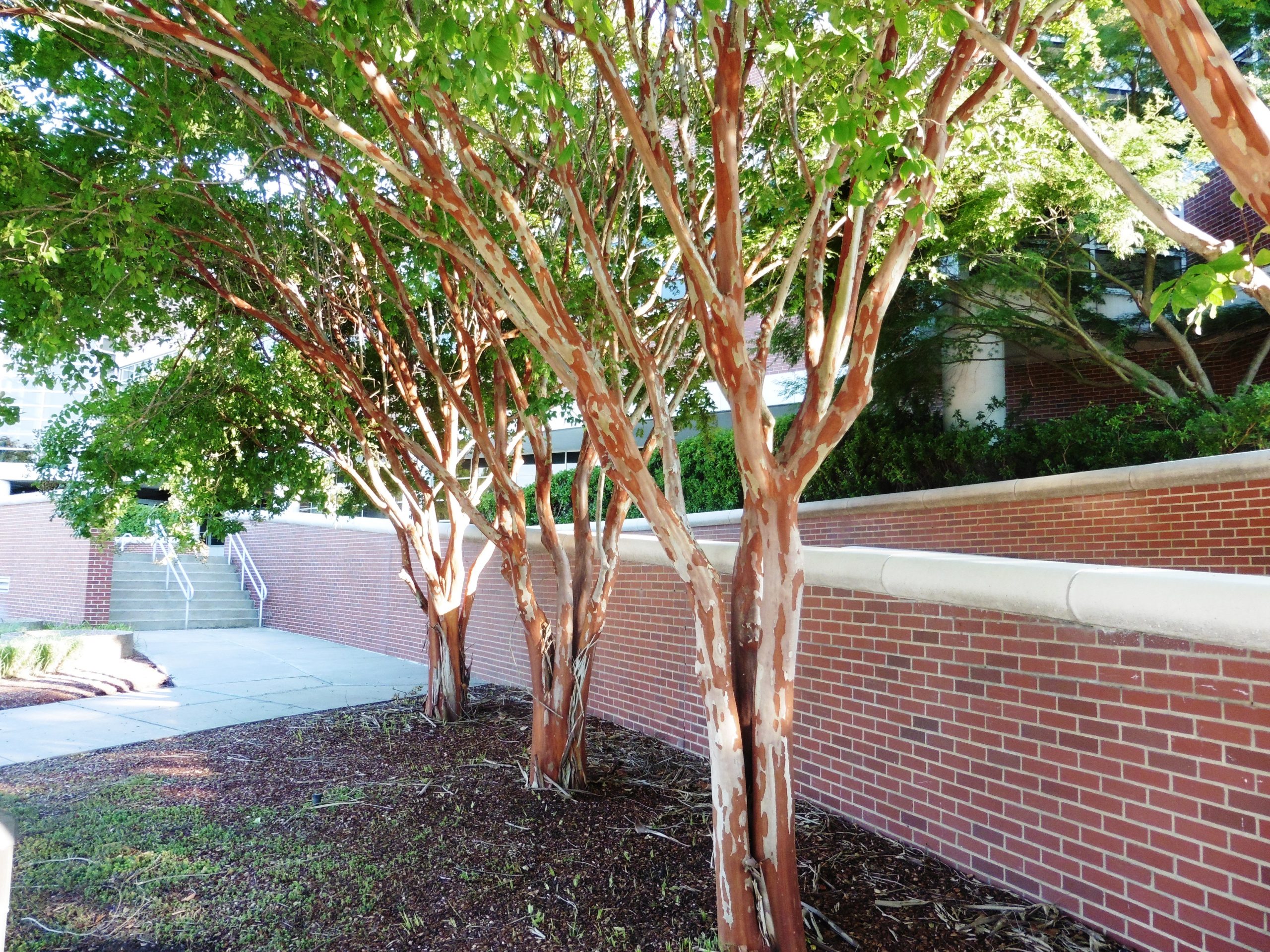 Many varieties have outstanding peeling and colored bark when mature. Ranging in shades of tans and grays to copper and cinnamon, larger trunks begin to shed outer bark, exposing the beautiful shades beneath. This “coming of age” for crape myrtles can give as much color and interest in the winter landscape as the flowers do in the summer. Overly sheared plants are never allowed to show this interest.

Luckily for crape myrtles, the plants are resilient, and can tolerate the annual topping or shearing that some gardeners insist on giving. Eventually, the damage done from years of shearing and large knobby growths can be corrected.

If starting from scratch with a new standard crape myrtle, choose a bright, sunny location for the new plant, and begin pruning in February. If left unpruned, the plant may resemble a utility pole, all tall upright growth. Once the structure is in place — arching branches, spreading in different directions — your job is almost complete. As with any plant, occasional maintenance is needed.