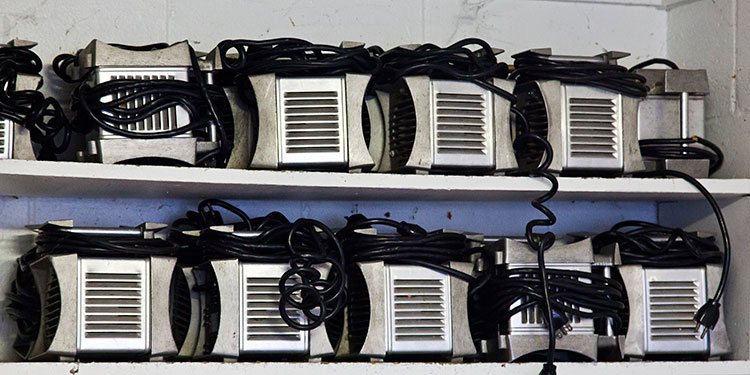 Marshall, the seat of Searcy County, hugs U.S. 65 and is a common stop for travelers heading to north central Arkansas, the Ozarks and Missouri. This summer, two of the town’s best known properties celebrate their 50th birthdays — the Daisy Queen restaurant and the Kenda Drive-In. Both have become classics in their own rights, and both see a great deal of out-of-town traffic. And on any Friday night, they’re both packed with people who come from all over central and north central Arkansas. 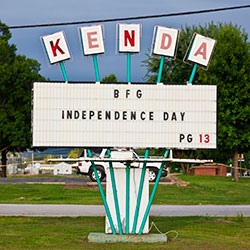 Marshall’s drive-In theater is named for the theater owner.

On a recent visit to the theater, Dearing, who owns the theater along with her husband, Todd, was busy welcoming patrons to the drive-in as their family has done for decades.

“Speaker tonight, or just the radio?” she asked seamlessly as the next vehicle pulled in. The couple within had two kids. Money was exchanged and the family was waved in.

Folks have been coming to the theater since her father, Ken Sanders, built it in 1966. Her grandparents had operated a single theater downtown, the Ken Theater, which they had named after their son, Ken. So in the family tradition, Ken Sanders named his drive-in after his daughter, Kenda.

Although his family had the downtown theater, Dearing says her father had “no clue” how to build or operate a drive-in.

“Dad entrusted several local people with building all the things the drive-in needed,” Dearing said. “He had no clue how to run it. He and mom used to go to the Razorback Drive-In down in Little Rock, but he wasn’t sure of everything that was needed. The screen was built locally, and so was everything else but the projection unit.”

In 1968, the Ken Theater downtown burned, and instead of trying to rebuild, they invested further in the drive-in, she added.

The Kenda is open year-round, showing double features every Friday, Saturday and Sunday, which is unusual for a drive-in. During the summer, single movies are also offered on Monday and Tuesday nights, and a couple of Thursdays each month are dedicated to family fun nights and classic car nights.

While other drive-ins across the nation were struggling to finance new digital players a few years back, the Kenda was already set to go. 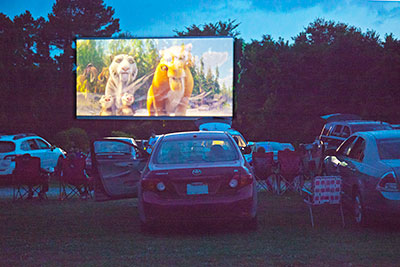 “We’ve loved every bit (of going digital) three years ago — the picture is incredible,” Dearing said. “The next year we upgraded to digital sound, and this year we resurfaced our screen. I don’t think you’ll find a better set-up at a drive-in right now.”

The Dearings just upgraded the 72-foot screen this year. The original steel screen had lasted 50 years and was still in fine condition, but the new screen with its baked-on finish is luminous, perfect for the crisp new digital imagery.

“In the summer, we pull for about a 100-mile radius on any given night — Little Rock, Conway, Greenbrier, Russellville, Clarksville, Mountain Home, Clinton — that whole range on any good night in the summer. It didn’t really slow down as much this winter,” Dearing added.

The drive-in is a full-fledged tourist attraction.

“Whenever Mom and Dad had it, it was mainly locals and now it’s evolved into more of a tourist attraction,” Dearing said. 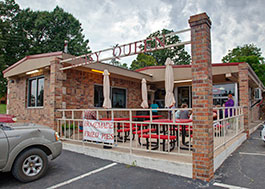 You can dine outside at the Daisy Queen.

There are locals who come in just for the concession stand, rather than the movies, something truly unique among theaters these days. She praised her husband for his expertise at running the concession.

“He runs a good concession,” she said.  “We’ve got really good nachos. Our barbecue nachos are great — they’re regular nachos with our own beef barbecue on top. We have cotton candy, candy, popcorn. We pop our popcorn in pure coconut oil.”

The prices at the concession for popcorn are $1 for a small and $2 for a bucket. Barbecue nachos, the most expensive item, are $3.50. And what other theater sells chocolate rolls?

Dearing said Facebook has been great for the Kenda. “Social media has changed everything for us,” she said.  “I’ve had a Facebook group for the theater for five years now, and it’s a great way to get out what we’re showing and what times we open.”

The Kenda Drive-In is open every Friday through Sunday throughout the year (except Christmas week), and every Friday-Tuesday during the summer. Tickets are $6 for adults and $2 for kids 6-10. There are frequent family fun nights and classic car nights, all of which are promoted on the theater’s website. For more information, check out the Kenda Drive-In Theater’s website at kendadrivein.com or call (870) 448-5400.

Bill and Patsy Mays bought Marshall’s Daisy Queen in 1966 with plans for it to be a long-term investment. And the Daisy Queen has certainly lasted. Expanded far beyond its original diminutive presence along the road, the popular dining spot now has two dining areas, a game room, restrooms and a patio.

In 2003, the Mays’ son Jeff and his wife, Robin, purchased the restaurant and continued the tradition. Today Robin Mays manages the iconic eatery. The Mays’ two daughters also work seasonally in the restaurant.

Originally, the Daisy Queen was a local stop for people in Searcy County. Today, much of its business comes from travelers.

“It still brings people in from the area,” said Robin Mays. “But in the past several years we have become known as a tourist stop for people going to Branson, going to the river (Buffalo National River) — in the fall, retired folks swing in.”

As the restaurant has grown, so has the menu. 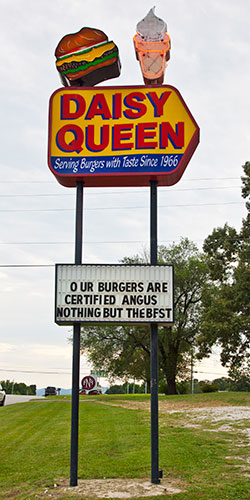 Located on U.S. 65, Marshall’s Dairy Queen is a popular stop for tourists and locals.

“We have over 70 menu items,” Mays said. “We just try to offer a variety to people, and I think that’s one thing that keeps people coming back. Your family can come in, and if you’re not in the mood for a burger, you can have a salad or a basket of shrimp. If it sells well, we’ll put it on the menu.”

The biggest seller, though, is the cheeseburger. Daisy Queen only uses fresh Angus beef, which is patted each morning and is never frozen. The classic cheeseburger is the favorite, though other versions such as Jeff’s Big Mouth Burger and a triple cheeseburger are also popular. 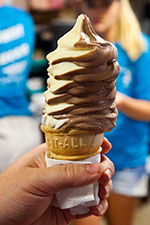 The must-have, though, is ice cream, and the soft-serve comes in the form of cones, cups, shakes, sundaes and banana splits. There’s a chocolate-vanilla swirl, flavor-burst swirls and traditional vanilla, too. As if there were not enough to satisfy your sweet tooth, the Daisy Queen is now offering homemade fried pies, cooked to order, according to the restaurant’s Facebook page.

Kat Robinson is a Little Rock-based writer specializing in travel and food.