Susie and David Powell were living the dream — retired and traveling along the Gulf Coast. And then one day, while sitting on the beach, they had an epiphany.

“We looked at each other and we said, ‘We can’t live this way anymore,’” Susie recalled. “We were bored. We didn’t have a purpose, and David said, ‘Let’s go open a restaurant.’”

And so they did. On April 23, 2012, they opened Hoots, specializing in barbecue and steaks, along U.S. 65 in David’s hometown of McGehee in southeast Arkansas. The restaurant is located in a remodeled building that once housed a service station, as well as other businesses throughout the years. Since it opened, Hoots has become the heart of this Delta farming community, with a strong regular clientele of locals, as well as travelers who make it a point to stop at Hoots on their way to the Gulf Coast or other destinations. 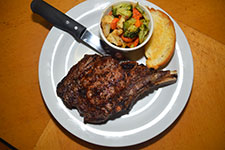 On my recent visit to the restaurant, I immediately felt like I had been invited to a family dinner. Susie and Executive Chef Brian Hargis had prepared a generous smorgasbord of food from the extensive menu for me to sample. They had also invited a group of Hoots’ regulars to help share in the bounty.

“You’ve got to try the grilled salmon,” one expertly suggested. “The banana pudding is the best,” another said. 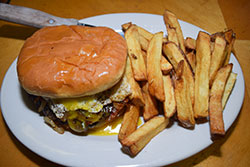 The ”Hoot” burger, topped with a fried egg and accompanied with hand-cut fries.

Along with the grilled salmon, which is seasoned with Hoots’ special rib rub, adding a bit of spice to the fish, I tried the sliced brisket, the barbecue pork ribs, the barbecue loaded baked potato, part of the 22-ounce bone-in ribeye, the grilled shrimp salad, the “Hoot” burger (complete with a fried egg), fried mushrooms and fried catfish. The side dishes included grilled asparagus, mixed vegetables and hand-cut French fries. And, yes, they have desserts — I had some creamy banana pudding topped with vanilla wafers and a piece of the freshly baked Italian crème cake, made special for the visit by Susie’s mother, Betty Morse.

It was all delicious, and I couldn’t pick a favorite. 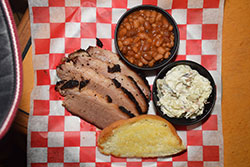 The sliced brisket is a customer favorite.

The barbecue is so popular that Hoots keeps its hickory- and oak-fired smoker going six days a week, stopping only to clean it before firing it up again. The briskets and pork butts are smoked 12 to 14 hours, overnight. Batches of St. Louis-cut pork ribs and chickens go in the smoker twice a day.

“We want them fresh,” Susie said, adding that all the restaurant’s food is made daily from scratch. “We don’t serve leftovers; everything is fresh, and when we run out, we run out.” 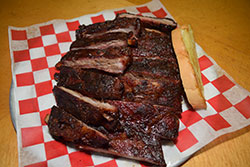 Once the meat comes out of the smoker and is placed on the plate, customers have a choice between two types of barbecue sauce.

“We call it red and yellow,” Susie said, adding that the red barbecue sauce is a traditional ketchup-based formula while the yellow has a mustard and vinegar base. Susie, who learned how to cook at a young age from her mother, developed the sauces, as well as the dry rib rub. 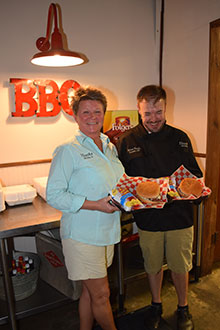 From the beginning, Susie was the main cook at Hoots while David was “the front of the house,” enthusiastically welcoming customers and taking time to visit with them. But, with his unexpected death in June 2015, Susie suddenly had to take over the entire operation. When she got the chance to hire Brian, a McGehee native, who was working as a chef at a duck club in Stuttgart, she jumped at the chance. In addition to the regular Hoots’ menu, he has added specials on Mondays, Tuesdays and Wednesdays. Those include crab legs with boiled shrimp, corn and potatoes, as well as shrimp and grits and “whatever else Susie wants to eat,” Brian said with a chuckle. 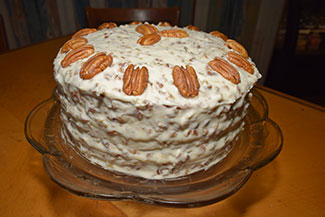 Italian creme cake, made from scratch by Betty Morse.

Susie’s mother, Betty, operates Hoots’ bakery, making such delectable treats as German chocolate cake, Italian crème cake and chocolate Italian crème cake, among others. The made-from-scratch cakes are baked fresh on Monday, Wednesday and Friday. You can buy by the piece or by the cake (pre-orders required for full cakes). Susie makes the cheesecakes.

With the help of  Brian and the rest of her staff of about 40, Susie can focus on the entire restaurant operation, which also includes a strong catering business. Just like David did, she makes sure to visit with restaurant patrons.

“David took care of the people, and people loved seeing him,” Susie said. “He would go and talk to everybody who was here. He was ‘Mr. Hoots.’”

Although he is greatly missed, Susie is doing her best to maintain the homey, friendly and relaxed atmosphere she and David created. “When David and I opened the restaurant we said we want you to come as you are — you’ve been in the field and are dirty, we don’t care. We don’t care how you are dressed. We just wanted people to be comfortable.” 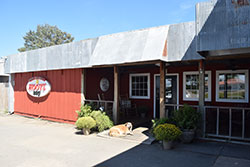 The restaurant truly has a relaxed, at-home feel. This tone is set as soon as you walk through the front porch, complete with rocking chairs, to go inside. Oftentimes, you’ll find Miss Hoots, the official restaurant dog, snoozing away on the porch.

So how did the restaurant get its name? Susie said she and David chose Hoots for two reasons — the owl is the McGehee school mascot, and they want their customers to have fun, or rather, to “have a hoot” while they are at the restaurant. “It fit our personality for having a good time and it fit our community for our school mascot,” she said.

In addition to the food, Hoots also offers a full bar, including a large selection of imported beers. There is also a 250-seat banquet room that can be used for meetings, wedding receptions and other special events.

For lunch, the restaurant serves everything on the menu, except the grilled salmon and steaks, which are served only at dinner. Customers place orders at the counter at lunch and the food is delivered to the table. At dinner there is full service with a wait staff.

Even with the help of her devoted staff, Susie still stays busy. Constantly in motion, she was a woman on a mission during my visit. She was making sure all the food was prepared and delivered, while also greeting and visiting with the diners.

“Owning a restaurant is not a job, it is a lifestyle,” Susie said. “And you either like it or you don’t. I love it.” 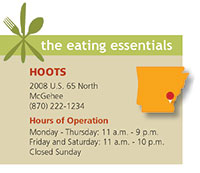