When gardeners hear “perennial,” they think of plants like hostas, daylilies and coneflowers — ornamental herbaceous plants that come back every year. While many perennials are ornamental, there are some edible perennials as well.

Asparagus: One of the most popular perennial vegetables is asparagus. Asparagus gardens can 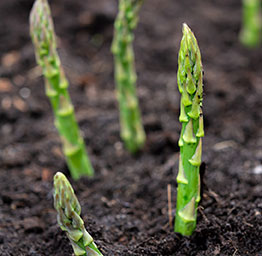 With proper care, an asparagus bed can produce for 20 plus years.

live for a long time and yield more than enough fresh asparagus each season. Dormant crowns are sold typically starting in late January through early April. You don’t begin to harvest asparagus until it is 3 years old. Most crowns sold today are 2 years old, requiring only one season to wait before harvesting. After that, count on great production for years, provided beds are well-managed.

Asparagus likes a well-amended and well-drained soil in full sun. It also likes a more neutral pH, so have your soil tested; if it is extremely acidic, a little lime can help. The first year, and every year after harvest season ends, the plant will produce large fern-like fronds, which will grow 4-6 feet tall. If you are planting it in a vegetable garden, plant it on the north side of the garden so it doesn’t shade other lower-growing vegetables. Foliage will grow all season to manufacture food to produce healthy stalks next season. After a killing frost, cut foliage immediately, or leave it as a mulch. Some gardeners leave spent foliage in the garden after frost to prevent winter weeds, cleaning it up right before the beginning of the gardening season.

Although you can’t buy asparagus crowns yet, you can get started preparing a site now. Clear the area of grass and weeds, and add in manure, compost or other amendments this fall. When you plant next season, dig a trench 4 to 10 inches deep, and place crowns in the bottom, spreading out their roots before covering lightly with soil. As plants grow, keep adding more soil to the row until the trench is filled back in. Fertilize plants by using a broadcast application of a complete fertilizer. Once plants are in production, fertilize annually after harvest season has ended.

As plants mature, begin to harvest by cutting young spears at the soil line until the size begins to get smaller. Don’t harvest anything smaller than a pencil in diameter. If you overharvest, it can put a strain on the plant, which can impact production for many years. You should be in full production by year four.

Perennial onions: Many gardeners grow onions of all types, but some are perennials, including multiplier onions and Egyptian Walking onions. Both types are considered heirloom or pass-along plants because they are not commonly sold in the nursery trade. If you know someone who has some, they will usually gladly share.

Multiplier onions are sometimes called potato onions, since they form clusters of smaller underground bulbs instead of one large bulb. They can be harvested as green onions when small, and larger bulbs can be used like any other onion.

Egyptian Walking onions are often evergreen plants in Arkansas gardens, except in a very cold winter. They grow bulblets on top of their stalks instead of flowers like most members of the onion or allium family. As bulblets form at the top of green onion-like foliage, they weigh down the stem, pulling it to the ground where they can grow new plants. This is how they move in the garden and how they get the common name “walking onion.” Place small bulbs no more than 1 inch deep and 4 to 5 inches apart. The small bulbs can be separated but will grow as a clump very well. They also multiply from the base, so established clumps can be divided in the spring. Harvest individual young shoots and stems as green onions, or eat some of the top bulbils. The underdeveloped onion at the base is edible but can be extremely pungent.

Rhubarb is another perennial vegetable, which is commonly grown in northern gardens, but is 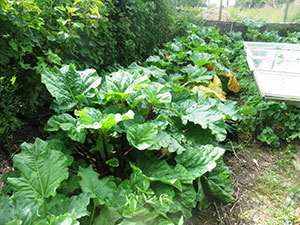 Rhubarb prefers a much cooler climate than we have in the South, but with perseverance, gardeners can get results.

making some headway in Arkansas. Rhubarb is often sold as dormant roots, similar to asparagus in late winter to early spring. Plant rhubarb roots with the main bud 2 inches below the surface in a rich, well-drained soil with full morning sun and afternoon shade. Plants need at least six hours of sunlight. Harvest stalks in the spring, beginning in the second year and thereafter. Only the stalks are edible; the leaves are toxic. Mature rhubarb plants can get quite large, up to 3 to 4 feet in diameter. Fertilize them each year as growth begins in the spring, and again in mid-June. Mulch the plants, and keep them watered when dry.

Jerusalem artichokes or sunchokes: Despite the name, they are not from Jerusalem, nor are they artichokes. The plant produces small yellow flowers on tall stems in late summer and fall. Depending on variety, they can grow 5 to 10 feet tall or more. Tubers produced underground can be used as a potato substitute, and freshly dug tubers are often used as a water chestnut substitute. Mature tubers are knobby in appearance and can be brown, white or purple with an inner white flesh. Tubers can be dug as needed beginning in the fall, but those harvested after a frost are typically sweeter. Plants will grow in a wide range of soil types, but yield best in well-drained lighter soils.

Horseradish is a perennial herb that produces a spicy root. Crowns can be found in late winter or early spring at some garden centers. All you need is a crown or a root of an established plant, and you are good to go. Fertilize once in the spring, and water as needed. Plants grow 2 to 3 feet tall. Roots can be dug any time after a frost. Any roots left in the ground will return the following year.