Each year, the Arkansas Living staff has the privilege to cover and help out at the annual Arkansas State Spelling Bee, sponsored by the Electric Cooperatives of Arkansas. (See story, page 8.)

Usually, the kids who come from all over the state to participate are understandably nervous and quiet as they wait to take the stage. 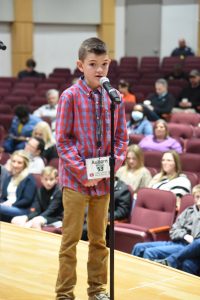 But not Drew Mabry.

Drew, a fifth grader at Acorn Elementary School in Mena, had a lot to say to me and to anyone who stopped by the holding area before the March 5 Bee.

He told me his name and where he was from. He told me all about preparing for the competition. And he told me about the special reward that awaited him if he won.

“I’m getting a pedicure,” he said, adding with excitement, “with hot rocks!”

A talker with a love for words and spa treatments? I had just met my spirit child!

But Drew, I’d come to learn, wasn’t always a talker. In fact, he was once nonverbal.

Auborn Andrew “Drew” Mabry, a member of our extended cooperative family, is the son of Jennifer Mabry, executive assistant-office of the president/CEO at Rich Mountain Electric Cooperative, and her husband, Leo.

Jennifer says, “Drew was probably about a year old when I really started noticing something was wrong. … Some of the things he had been doing, he couldn’t do anymore. He was losing eye contact, and his words would just repeat. And he wasn’t with us anymore.”

It would take several years of waiting and assessments for Drew to officially be diagnosed with autism spectrum disorder. The family was told that Drew probably wouldn’t be able to speak.

But today Drew is quite the speaker, thanks to years of intensive therapy, a special diet and parental persistence. (Leo, a teacher, became a special education teacher, inspired by his son, and Jennifer is active with several outreach organizations.)

Drew is also quite the speller (not to mention an accomplished artist and writer). He has won at least his grade’s spelling bee each year. This year, he was his school’s winner, as well as the Polk County champion.

Drew worked to memorize 3,000 of the 4,000 Scripps’ “Words of Champions,” but was eliminated from the 2022 State Bee (alas, no hot rocks pedicure that day, but he recently got to enjoy one another day). He misheard and misspelled the word “indolent” by one letter.

Suffice it to say, there is nothing “indolent” — lazy — about Drew or his fine family!

Sit a “spell,” and enjoy this issue!