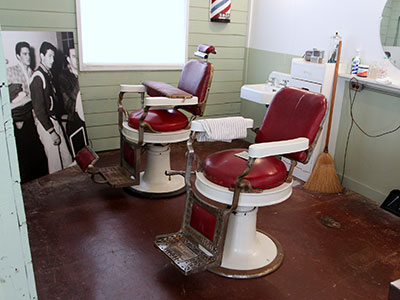 Each year, thousands of people visit the reconstructed barbershop where Elvis Presley was given his famous Army haircut at Fort Chaffee in Fort Smith. But the Chaffee Barbershop Museum is more than just a place to celebrate a moment when “The King” of rock ‘n’ roll had his coiffure clipped.

Presley received his draft notice in 1957 while he was filming “King Creole.” The studio successfully argued for a deferment that allowed him to finish filming the movie, but once it was complete, Presley reported for duty at a Memphis induction center. From there, he was transported to Fort Chaffee.

This wasn’t a straightforward haircut, though. For months, fans had pleaded with their congressmen to find a way to keep that Presley pompadour from being cut. Senators searched for exemptions to the rules. In the end, there was no way around it: Elvis had to lose the sideburns. He was to receive the same crewcut all enlisted men got when they entered service.

He knew he was getting a haircut, so Presley got a jump on the barber and had his stylist go ahead and trim down his hair and sideburns before he went.

On the morning of March 24, 1959, after stopping for breakfast at The Coffee Cup in West Memphis, Elvis Presley went to Fort Chaffee. Once his physical was complete, he had a seat in the barber’s chair. Dozens of photographers documented the act, committed by James “Pete” Peterson, the head barber at the camp.

Elvis spent just three days at Fort Chaffee before his next posting. But there are a lot of people around Fort Smith who have locks of what they consider to be Presley’s hair, and a whole bunch of people who believe they saw the popular singer during his time there. And, in the decades since, thousands of fans have made a pilgrimage to the facility.

In 2008, the Chaffee Barbershop Museum opened at Chaffee Crossing, a portion of the former Fort Chaffee that’s now being commercially developed for a variety of uses. It started out as a place to celebrate Elvis’ cropped top and to show off the old barber chairs used at Fort Chaffee. But other things were added, too.

For instance, two red barber’s chairs at the other end of the room came from a barbershop downtown on Garrison Avenue, and they have a completely different claim to fame. As the story goes, the famed criminals Bonnie and Clyde came in and had haircuts, and sat in these very chairs. The duo is known to have hidden out in Fort Smith while recuperating from wounds.

The big room where the barbershop is located is inside one of the old barracks on the property. There’s a cardboard cutout of Elvis and Peterson in the end chair. And you’ll see a lot of other neat things, like the different grooming products used back in the 1950s. 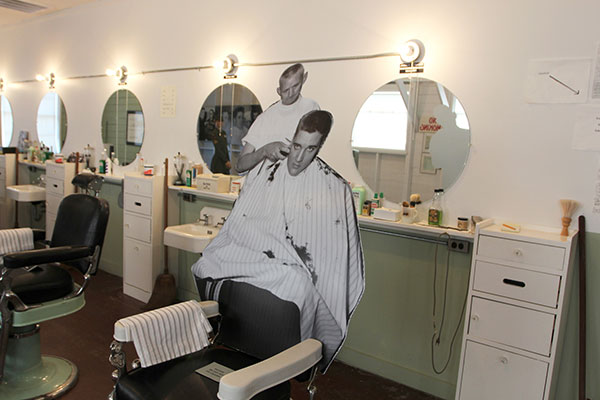 See the cardboard cutout of Elvis getting his GI haircut. Photo by Kat Robinson.

But that’s not all. There’s also all sorts of history about Fort Chaffee, and it no longer fits in just one room or even one building. The larger room in the Chaffee Barbershop Museum isn’t about Elvis at all. It’s about the formation of Fort Chaffee, with artifacts from its time as Camp Chaffee after the camp was opened on Dec. 7, 1941, (just hours before the Pearl Harbor attack, incidentally). It’s also packed with information about the people from other places who have come to this Army base over the years. Those included German prisoners-of-war during World War II to Vietnamese refugees who were housed here after the Saigon Airlift; Cuban refugees and prisoners in 1980 and those displaced by Hurricane Katrina who came here in 2005 when that devastating storm struck New Orleans and the Mississippi Gulf Coast, leaving thousands with no roof over their heads. There’s also a loop that plays concerning the three movies filmed at Fort Chaffee — “Biloxi Blues,” “The Tuskegee Airmen” and “A Soldier’s Story.”

A second barracks has been turned into offices for the museum, and at its other end houses more information on Fort Chaffee, including a history of the area before the federal government claimed it for the new Camp Chaffee. There’s also a detailed history of life at Fort Chaffee.

There’s so much about Fort Chaffee at the facility, in fact, that another building will soon be converted for use. The two-story barrack will house most of the Chaffee Military Museum, and will hopefully be up and running within three years.

Kat Robinson is a Little Rock-based writer specializing in food and travel.