Since 2013 the University of Arkansas – Pulaski Technical College’s Culinary Arts and Hospitality Management Institute has been cooking up a powerfully positive program that enhances career education for all its students. Its two-year 3D program trains students with developmental disabilities right alongside their traditional student peers, to the benefit of everyone involved.

Currently 20 students are enrolled in the 3D program, which has turned out 11 graduates so far. 3D Program Director Chelsey Moore said the program’s graduates are all succeeding in the industry.

“We have one graduate at the Arkansas Heart Hospital making $13 an hour full-time with benefits. That’s life-changing, especially for a person with disabilities who has never made more than piecemeal wages,” she said. “We have a graduate at the Clinton Library working on their catering staff. She’s a social media butterfly, always posting pictures saying, ‘Well, I met the president today,’ or ‘I just served this person.’ It’s cool to see them plugging into the community.” 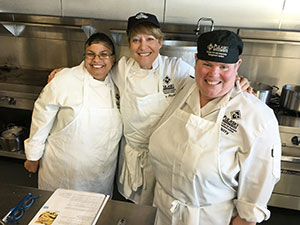 Embracing differences and being inclusive is at the heart of what the program is about, Moore explained. Students choose to pursue training in culinary, baking or hospitality. The first semester, 3D students spend in core 3D classes, but after that, they can join any mainstream class that interests them and work alongside traditional students. In their classes, 3D students do everything the other students do; the difference is in how they are assessed, Moore said. “For instance, a mainstream student taking Soups, Stocks and Sauces might have a list of 30 competencies they are expected to master. In 3D, we whittle that down to three really core competencies that, if you master soups, you probably have these skills.” 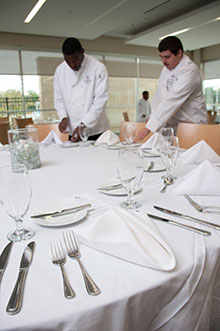 Students Cleo Ridgel and John Allen Smith set the cutlery for a formal lunch in their Dining Operations class. photo by Kelly Quinn

The two-year program was named 3D originally because its goal was to see students in three dimensions, she explained. “Now, it also stands for Defining the Dimensions of Diversity. We’re showing how big diversity can be.”

Todd Gold, dean of the institute, said that first year was funded through a private donation through the Lisenne and late Lt. Gov. Winthrop Paul “Win” Rockefeller family, whose son, John, graduated in the first class. “Thanks to the support of the Rockefellers and others, we were able to sustain the program and get it to where it’s self-sustaining now. We’re super proud of that.” 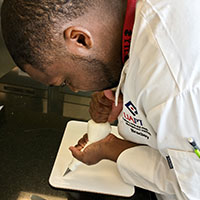 Last year, the program got another huge boost when the federal Department of Education certified it as a comprehensive transitional post-secondary program (CTP), enabling 3D students to apply for and receive financial aid for their studies. The program seeks to help these students in several core areas: academic rigor, socialization, independent living and, most important, gainful employment.

The program was the first such in the state, though Moore is hopeful that more institutions soon will be following their lead. Moore was recently elected to the executive board of the Southeastern Post-Secondary Education Alliance (SEPSEA), the alliance of all states that have inclusive programs such as institute’s. “As an Arkansas representative, the thing that we’re missing that the other states have is a statewide alliance,” Moore said. “On Nov. 3 at the University of Central Arkansas we are holding a summit for different colleges to come and hear about our program and how to bring inclusion to all of the colleges in this state. Hopefully, we’ll have a statewide alliance where these programs start popping up all over.” 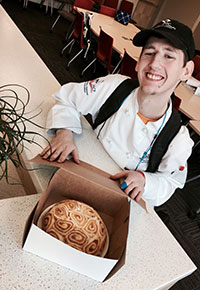 William Thalman takes home a Scarlet Empress Cake he made with his course mentor. photo by Chelesy Moore

Moore said working with 3D students is rewarding for everyone at the school. “It’s inspiring to see their professionalism. They are eager to be here. They want to succeed. They want to make this program proud. And they do.”

Follow the 3D students’ achievements on Instagram at @uaptc.cahmi.3d, or visit pulaskitech.edu/3D for more information on the program.