Due to the pandemic, the late February 2021 induction ceremony was different. Just like the food community’s challenging last year — marked with new health and social distancing protocols, reduced restaurant attendance and increased business closings — was different. Instead of a live, in-person event, honors were awarded virtually in a video uploaded to the Heritage division’s Facebook page.

But while the ceremony was a departure, Stacy Hurst, secretary of the Arkansas Department of Parks, Heritage and Tourism, says the popular program’s mission remains the same: “Arkansas Heritage developed the Food Hall of Fame
as a way of recognizing and celebrating our state’s rich, diverse and amazing food culture and heritage.”

It’s also a “truly statewide program,” Hurst says, noting they received more than 2,000 nominations this year and from all 75 Arkansas counties.

Each year, the 13-member Food Hall of Fame committee dices down that lengthy list of nominations to a digestible number of finalists in different categories (including Inductees, Proprietor of the Year, Gone But Not Forgotten and Food-Themed Event). From there, a “blue-ribbon panel” selects winners. The only non-juried honor, the People’s Choice Award, goes to the restaurant with the most online votes (this year’s winner: West Helena’s Bistro Bar & Grill).

So now for the fun and the food. Let’s meet and greet … and eat!

Eligible restaurants must be owned and operated in Arkansas and in business for at least 25 years.

To delight in a family-style feast at Rogers’ much-loved Monte Ne Inn, diners must do two things: Make a 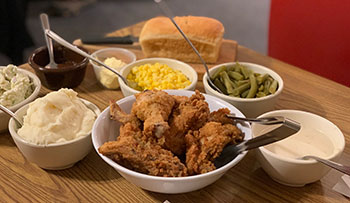 reservation, and show up hungry. Owner David Myers — who prefers the term “host” — and his friendly staff handle the rest.

At Monte Ne Inn, there is no menu, and there are no decisions to make other than drinks and desserts. There’s simply fabulous Southern fried chicken, served with a surplus of belly-filling fixings for one reasonable per-person price.

The appetizing aroma tickles appetites before diners even set foot in the homey eatery, which is accented with display cases of poultry-shaped salt-and-pepper shakers and old-fashioned clothes irons, as well as antique implements and cooking tools on the walls.

Upon being seated, diners receive a pot of bean soup, followed by a mouthwatering parade of all-you-can-eat pass-arounds, including the famous fried chicken, mashed potatoes, white gravy, green beans, coleslaw and bread with apple butter.

Forget the fact that you have no room for dessert; a warm, shared serving of sweet peach or blackberry cobbler (can’t commit? They’ll serve you some of both!) slides right down, especially when crowned with a cool scoop of vanilla ice cream.

Hurst explains, “Named after Monte Ne, the Ozarks resort area built by William ‘Coin’ Harvey more than a century ago, which is an Arkansas history lesson of its own, the Monte Ne Inn Chicken Restaurant has been serving its signature fried chicken to the folks of Rogers, and those who drive from much farther away, since 1972.”

Accepting his award, Myers says, “It is a great honor to be recognized. It’s very humbling; it’s humbling for my staff and for Monte Ne Chicken.”

This was the first year Monte Ne Inn was nominated for the Food Hall of Fame, making it a spring chicken.

Its name tells you that Feltner’s Whatta-Burger is not known for turkey. (Though there is, these days, a 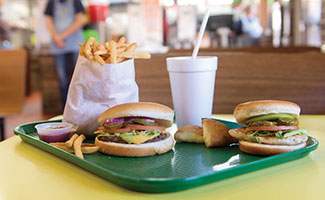 Burgers, sandwiches and fries are always abundant at Russellville’s Feltner’s Whatta-Burger. While the dining room has been closed due to COVID-19, customers have been welcome at the walk-up window. courtesy of Fellner’s Whatta-Burger

turkey burger on the menu.) Still, Feltner’s Whatta-Burger — the Arkansas original in Russellville, not to be confused with a similarly named, differently spelled fast-food chain out of Texas — first opened on Thanksgiving Day of 1967.

Due to the pandemic, Whatta-Burger, which began with just a walk-up window, has temporarily returned to its takeout roots, keeping its dining room closed since last March. But as a manager told Arkansas Living then, “We’ve not really seen a decrease in our normal day-to-day business. We’re getting a lot of support from the community.”

Owners Missy and Randy Ellis continue the legacy that founder Bob Feltner began decades ago when, he reportedly settled on the restaurant’s location by sitting roadside in a chair and counting the number of cars that cruised by.

“We would like to thank all our loyal customers and employees for the past 53 years,” Randy Ellis says.

Hurst says this is the fourth time Feltner’s was nominated, adding, “The reason is simple: It is a mainstay of Arkansas Tech students, as well as travelers headed to Razorback games, or those simply passing through Russellville. … Burgers, shakes and generous servings of french fries have been favorites since the doors first opened.”

Shakes are the last thing on our mind on the frigid Saturday we pull into Feltner’s lot for a late lunch. But a dashboard banquet of messy, meaty handhelds and fried sides sounds like just the thing to soothe our road-weary stomachs and spirits.

It’s cold placing and retrieving our window order, but the food, ready in minutes, is hot and hearty. A melty, beefy Whatta-Cheese with the works is the ultimate Interstate 40 palate-pleaser, especially when joined by satisfying sides of crisp fries and crunchy onion rings. As good if not better is Feltner’s tasty take on the classic Southern fried bologna sandwich, featuring a nicely browned, pleasantly plump meat patty. Whatta bologna, indeed!

Despite its location in a Little Rock strip center, Star of India feels more like a residence than a restaurant. 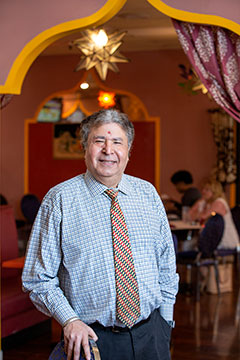 “Welcome home!” booms charismatic owner Sami Lal, legendary for fussing over his guests and never forgetting a face or an order.

Though he might occasionally “forget” how long it’s been since a regular’s last visit. “You haven’t come to see me in 15 years!” he’ll joke, feigning fatherly guilt. Customer response: “Sami, you know very well I was just here two weeks ago!

As memorable as Lal’s friendliness is his fragrant, flavorful food, which he learned to prepare in his mother’s kitchen in India. After attending culinary school in Germany and co-owning a Dallas restaurant, he relocated to Little Rock, opening Star of India in 1993.

Hurst says about the third-time finalist, “Star of India truly changed the universe of restaurants in Little Rock and in Arkansas. Not only in the food offering, which is spectacular and authentic, but also in the remarkable level of charming and personal attention and service that is the trademark of the restaurant.”

Lal, who has also been nominated for Proprietor of the Year multiple times, including this year, says, “I’m grateful for all the support and love from the Little Rock community, and thanks to everybody from my heart, from my family, from everybody.”

Star standouts include the Chicken Tikka Masala with a heavenly, herbed tomato sauce; the zesty Saag Paneer (spiced spinach with chunks of Indian cheese); and the yogurt-marinated, grilled Tandoori Chicken with a flavor profile as vibrant as its technicolor hue. All come with fluffy basmati rice and are best enjoyed with pleasingly puffy homemade naan (bread), which is delicious plain or stuffed with everything from onions to potatoes and peas.

Speaking of stuffed, there’s no other way to feel leaving Star of India. And even then, Sami will attempt to push sweets, such as Gulab Jamun (honeyed pastry balls), homemade ice cream or Kheer Badami (rice pudding) on you.

As you waddle away in your well-fed state, Lal just has one more thing to say. “See you tomorrow!”

Proprietor of the Year Winner

He’s been a semifinalist for the James Beard Foundation Restaurant and Chef Awards in the Best Chef: 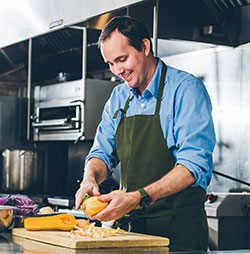 Propietor of the Year Matthew McClure continues to keep diners buzzing about The Hive in Bentonville.

And now Matthew McClure, executive chef at The Hive inside Bentonville’s 21c Museum Hotel, has a new honor to add to his expanding collection: Arkansas Food Hall of Fame Proprietor of the Year.

The Little Rock native attended the New England Culinary Institute in Vermont and cooked in Boston restaurants prior to returning to Arkansas and working under Chef Lee Richardson at the former Ashley’s at the Capital Hotel. He joined The Hive’s opening team in 2012. And his elevated Southern food has been earning acclaim ever since.

The Hive serves dishes like Sorghum Roasted Duck, Berkshire Hog Chop and Pimento Cheese (served atop The Hive Burger or as an appetizer with bacon jam and toasted 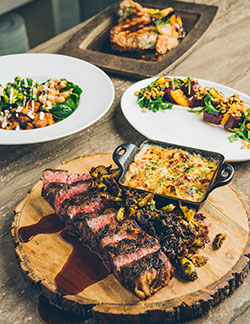 bread). The menu changes seasonally and based on the freshest ingredients available. One thing that never changes: squares of comforting cornbread with sorghum butter served to guests. As McClure told Arkansas Living months ago for a story on cornbread: “I really want guests, Arkansans or out-of-towners, to have this nostalgic sort of Arkansas culinary experience.” On Sundays, The Hive offers bonus culinary experiences: a brilliant brunch and a “Sunday Supper” prix fixe menu in its dining room that doubles as a bold immersive artwork installation of honeycombs, kudzu vines and bees titled BuzzKill.

McClure says, “I feel like it’s really cool there is an Arkansas Food Hall of Fame. … It’s really an honor. I’m a big supporter of all things Arkansas, specifically food-related, and I want to champion that. And I’m thrilled that I’m not alone, that there are people who share my enthusiasm of talking about Arkansas — not just to Arkansans, but on a national stage.

“Awards like this give an opportunity for individuals to tell their story, which is all connected to the Arkansas food story.”

Gone But Not Forgotten Winner

Presley is said to have visited the North Little Rock fixture several times on his way to shows in Louisiana, before he made it big, and he was photographed there in 1958 while on his way to Fort Chaffee with fellow Army recruits.

The business founded in 1947 as Roy Fisher’s Café would reopen as Roy Fisher’s Steak House in 1958 when it upgraded to a new and bigger building on the other side of Broadway.

Founded by Roy “Cuz” Fisher and his wife, Maxine, the restaurant would eventually be run by son Roy Fisher Jr. and his wife, Chee Chee. Fisher’s, celebrated for its pies (like the noteworthy Cherry Nut) as much as its beef, closed in 2005.

Chee Chee Fisher says, “I’d love to thank all of our customers, our loyal customers, that we’ve had for years and years; they were like family to us. We miss you; we love you; and we really, really appreciate this honor. … We appreciate you letting our family serve you.” 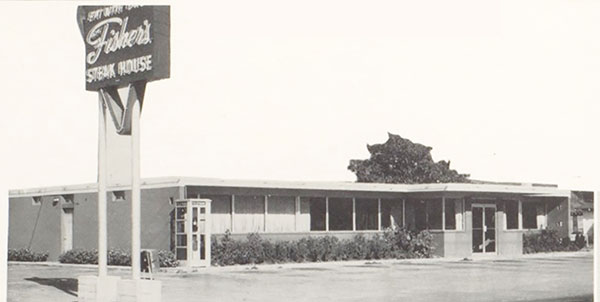 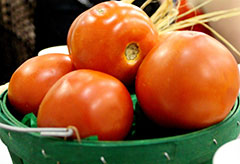 To be nominated in this Food Hall of Fame category, a community event must date back at least five years.

At 65 years old, the Bradley County Pink Tomato Festival is certainly ripe for the picking.

The first festival celebrating the crop that would one day become the state’s official fruit and vegetable was held in June of 1956. According to the festival’s website, pinktomatofestival.com: “Farmers in Bradley County have been raising tomatoes for sale since the 1920s. They chose a variety of tomato that would ship well if picked when the tops of the fruit just barely turned pink.” What began as a one-day event to

Featuring an All-Tomato Luncheon and pageants, the Bradley County Pink Tomato Festival is pick of the crop for homegrown fun. photo Kat Robinson

promote the tomato industry and boost local business has grown into a weeklong celebration. Events include everything from a parade and pageants to a 5K and golf tournament to an All-Tomato Luncheon and a Tomato-Eating Contest.

Traditionally held the second week in June (this year’s main festivities are scheduled for June 11 and 12), a vine time is enjoyed by all.