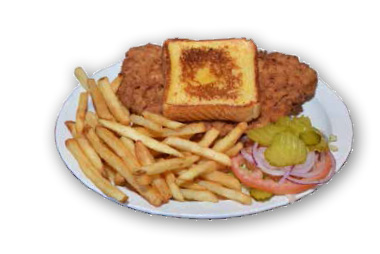 The Pork Cutlet Sandwich is a true Southerner’s dream.

Tony and Sheila Bell, owners of Fat Boys Fine Food and Catering, in Caddo Valley, have a reputation for providing great, genuine Southern hospitality and quality food at their restaurant. And, they have a simple saying for customers, “If you leave hungry, it is your own fault.” On the day of the Let’s Eat visit, Tony was talking to customers, calling them by their first names and sharing stories with them. Sheila was busy cooking and serving guests, along with several nice attentive waitresses and cooks.

Tony was formerly involved with a competitive barbeque team and sold insurance. Sheila wanted to open a restaurant, so they began by selling barbeque and other items out of a trailer. Then, in 2008, they bought the current location, which was formerly the Pig Pit.

“We have many, many regulars that have become good friends,” Tony said. “We have a good time and always let everyone know how much we appreciate their business.”

The combination of great food and equally good hospitality is a perfect combination as Fat was packed during lunch. According to a few regular customers, that is not unusual. The phone rang often during my visit with local people asking what the day’s special was and what desserts were available. Daily lunch specials include chopped beef or pork sandwich, pork cutlet sandwich, the Big B, ham and cheese sandwich, and catfish. 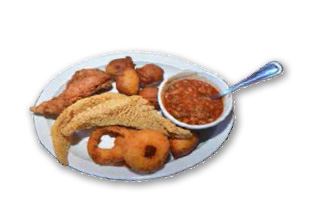 The catfish and chicken combo plate with homemade sides.

“If you are within 100 miles, then Fat Boys is the best place to go,” said Myron Crisco, who was eating lunch along with Tony Dickey. The two friends eat at the restaurant just about every day.

The food offerings are vast, so I quickly dug into the platters that the Bells delivered to my table.

The St. Louis-style bone ribs were thick and meaty with just the right amount of smoke flavor. The ribs were hand-rubbed with Fat Boy’s custom blend of spices, cooked over a hickory smoke pit and drizzled with a special barbeque sauce. A smoked sausage was also included on the plate.

The Big B is a legendary open-faced sandwich mounded with chopped pork or beef on a bun covered with Fat Boys’ delicious barbecue beans and sprinkled with the restaurant’s tangy barbecue sauce. A nice portion of fresh-made coleslaw comes on the side. The Big B was a creation from former owner Sam Hays.

The catfish and chicken combo plate featured U.S. pond-raised catfish that is hand-trimmed and mealed in Fat Boys’ blend of cornmeal-based breading, and the chicken was a large, fresh tenderloin battered in the flour and spices that make true Southerners shake their heads in loving amazement. And the homemade hushpuppies are light and loaded with a nice spicy kick.

My favorite was the fresh pork- loin sandwich, an extra large boneless tenderized pork chop battered in a signature blend of flours and spices deep-fried to golden perfection on Texas toast with French fries. If you order this, make sure you are hungry!

Charcoal-grilled, hand-cut, aged rib-eye steaks are featured on Tuesday and Saturday evenings. Several local residents told me it would be worth a drive to come back.

The warm blueberry pie and scoop of ice cream are the perfect way to complete a meal.

And then the Bells presented their homemade pies and cakes. The blueberry pie was thick and loaded with blueberries surrounded by a flaky crust. The chocolate pie and coconut cream pie were also absolutely perfect. And, Sheila’s legendary strawberry cake was wonderful and packed with fresh strawberries.

They are also known for their tasty fried pies. Come on over to Fat Boys Fine Food to experience great service and great food. You won’t leave hungry, and you will probably make some new friends.