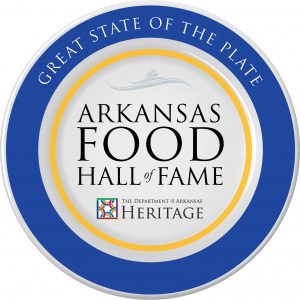 The state and its rich, diverse culinary scene are honored each year at the Arkansas Food Hall of Fame, sponsored by Arkansas Heritage. Nominations are made by the public and narrowed by a committee to a small class of inductees that are celebrated for their influence on Arkansas cuisine.

This year’s class includes restaurants that have survived decades and a pandemic,
and which have left an extraordinary mark on our state.

Eligible restaurants must be owned and operated in Arkansas and in business for at least 25 years. 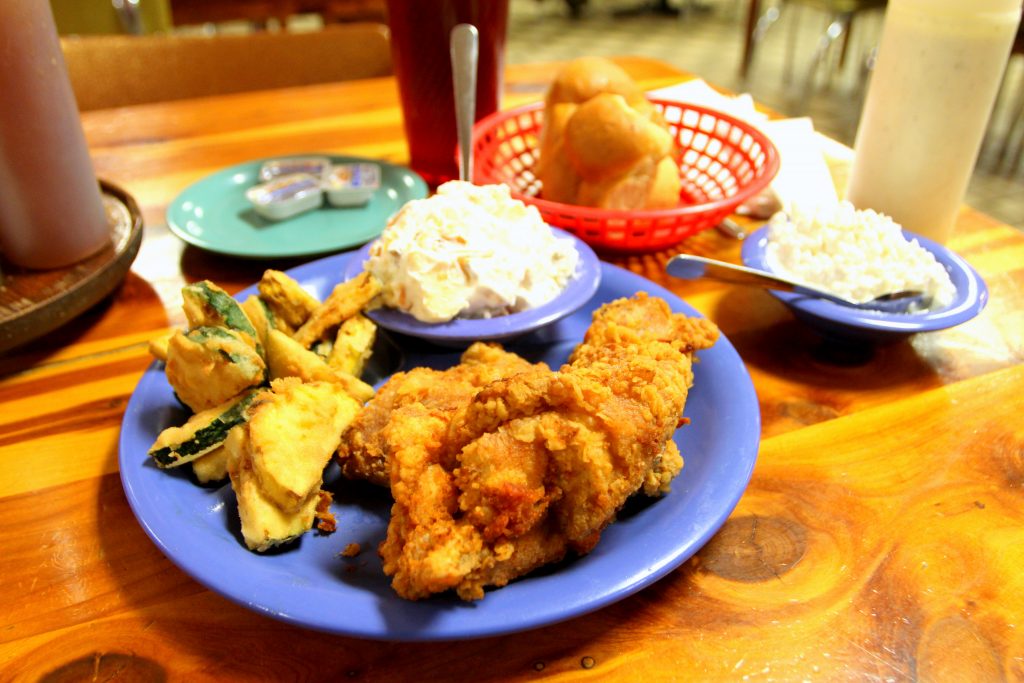 Since 1944, this bright pink edifice along Thompson Street has offered “The Best of Better Foods.” Toy and Bertha Neal opened the restaurant as a family affair, offering smothered pepper steaks, meatloaf, catfish, chicken and dumplings and hot soup to diners, whether it was at a counter barstool or for table service. Over the years, the interior went from pink tile to green, and the family collection of taxidermy and hunting rifles were brought in to decorate.

Today, Neal’s is known for those great, hearty meals, for high-peaked meringue pies, and for marvelous hand-cut and battered fried chicken. In 2004, Southern Living named Neal’s Cafe’s fried chicken as some of the South’s best, and it’s still remarkably good today.

Neal’s still cuts its chicken breasts into three pieces, as was done generations ago. That center cut, the pulley, is a succulent white-meat delight. Neal’s fries its chicken in a cast-iron pan with an inch of hot lard and only fries to order. It may take a few minutes more, but every plate comes out perfect. 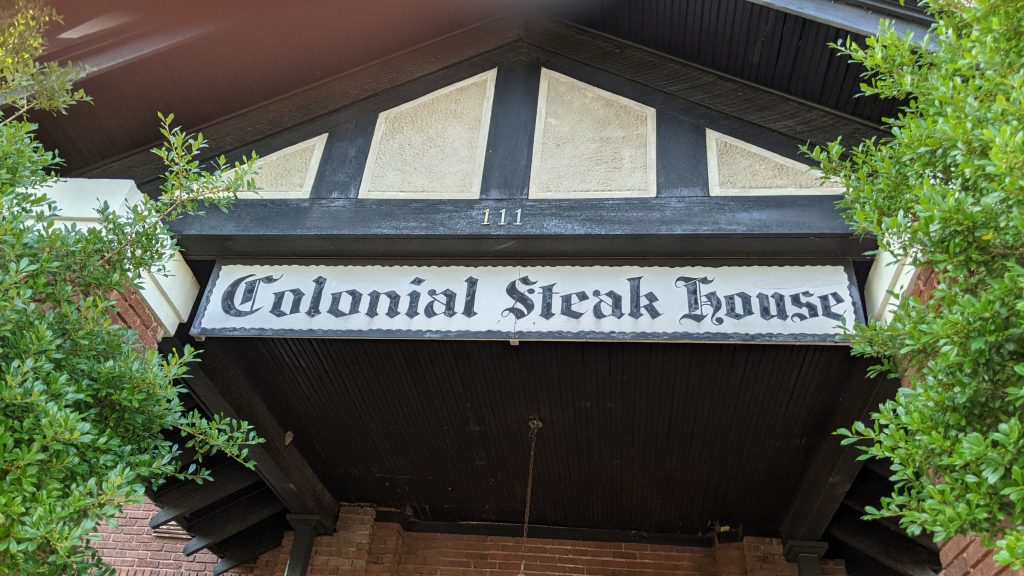 For nearly 50 years, the Colonial Steak House has been a prime dining spot in Pine Bluff. (CARLA KOEN)

Originally opened by Mildred Compton in 1973, Colonial Steak House has become Jefferson County’s place to celebrate weddings, proms and birthdays for generations. After a fire in 1987, Scott Mouser moved the restaurant to its current location, a former 1910s era schoolhouse. He still owns the building.

The restaurant had been run by the Coker family from 1993 to 2014, when they sold it to Dana and Wayne Gately. Dana had worked there for more than a quarter of a century at the time. Today, their daughter, Allison Waller Hall, runs the restaurant and has changed very little. “Colonial has been a part of my life since I was 8 years old,” she says. “I actually considered letting it close when Mom retired in 2020. Thankfully, Scott Mouser believed in me and was able to convince me to go into business with him.”

Colonial Steak House has become famous for its fine dining and dishes, particularly its baked au gratin potatoes, French onion soup, cotton blossoms (fried crab and cream cheese wontons) and a 32-ounce roasted prime rib of beef. Dana Gately once said the dish was worth two meals — one to share with your special someone at the restaurant, and one to take home to serve with carrots and potatoes as a roast the next day.

Hall hopes to carry on the restaurant’s tradition for another 48 years. That includes serving the famed Black Bottom Pie, Colonial’s exclusive dessert. 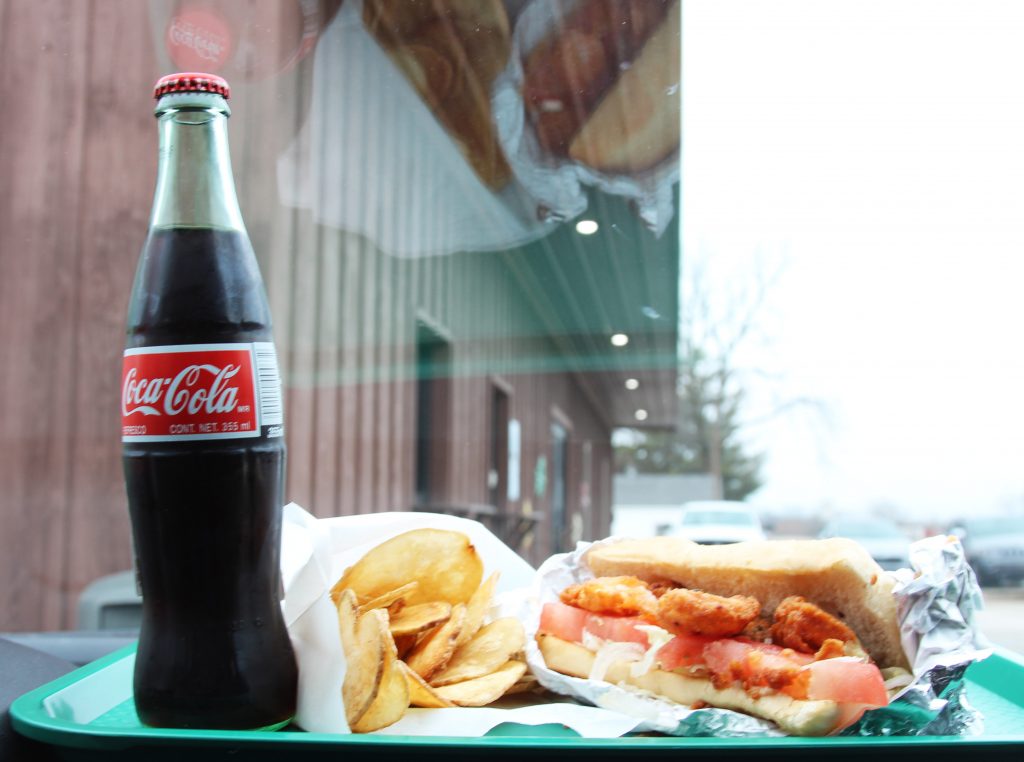 Fit for a King: Po’boys and homemade kettle chips at the Dairy King in Portia. (KAT ROBINSON)

One of Arkansas’ more than 90 mom-and-pop dairy bars still in existence, the Dairy King traces its roots back to the 1950s.

The original building was a major stopping point for travelers along U.S. 63, with its classic burgers-and-shakes menu. It has continued nonstop ever since. 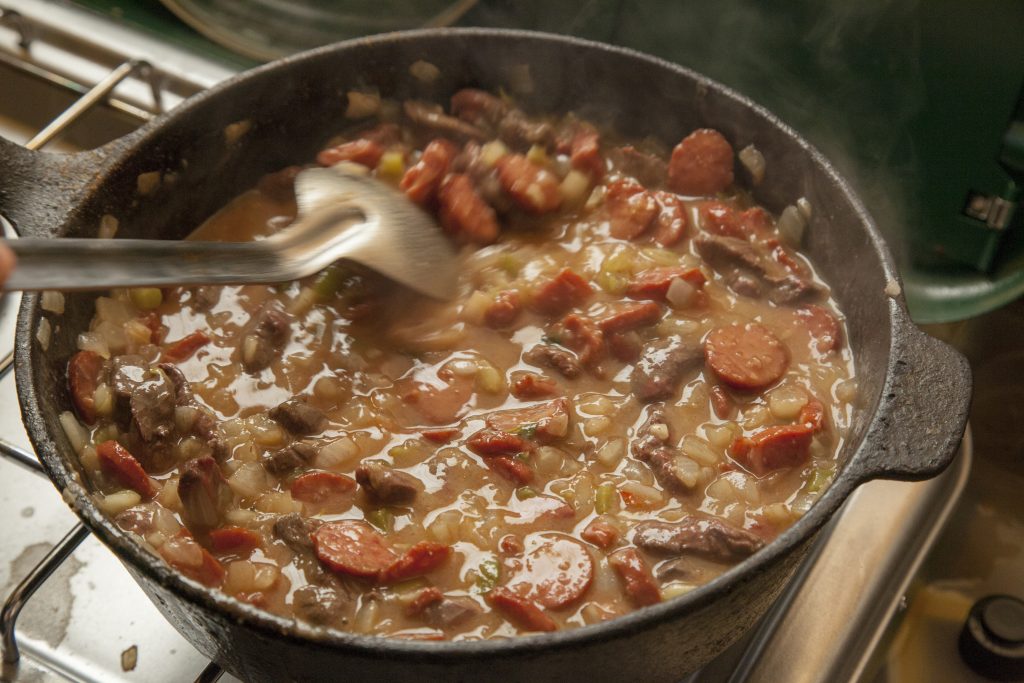 Thanksgiving is all about turkey, but the Saturday after is all about duck at Stuttgart’s World Championship Duck Gumbo Cookoff. (KAT ROBINSON)

Lauded as “Mardi Gras on the Grand Prairie,” this daylong competition and gathering happens each fall under a tremendously large tent in the parking lot of Producers Rice Mill in Stuttgart. Within, epicureans of all ilk conjure pots of spicy, tasty duck gumbo in replica duck stands that, in some cases, rise three stories tall.

The atmosphere of pleasing food and drink, paired with thick jackets and boots, comes with a festive air. Beads are thrown, stickers are placed, and cups of hot and steamy gumbo are judged and shared with the crowd.

The truly unique Arkansas Delta experience is held each year the Saturday after Thanksgiving. 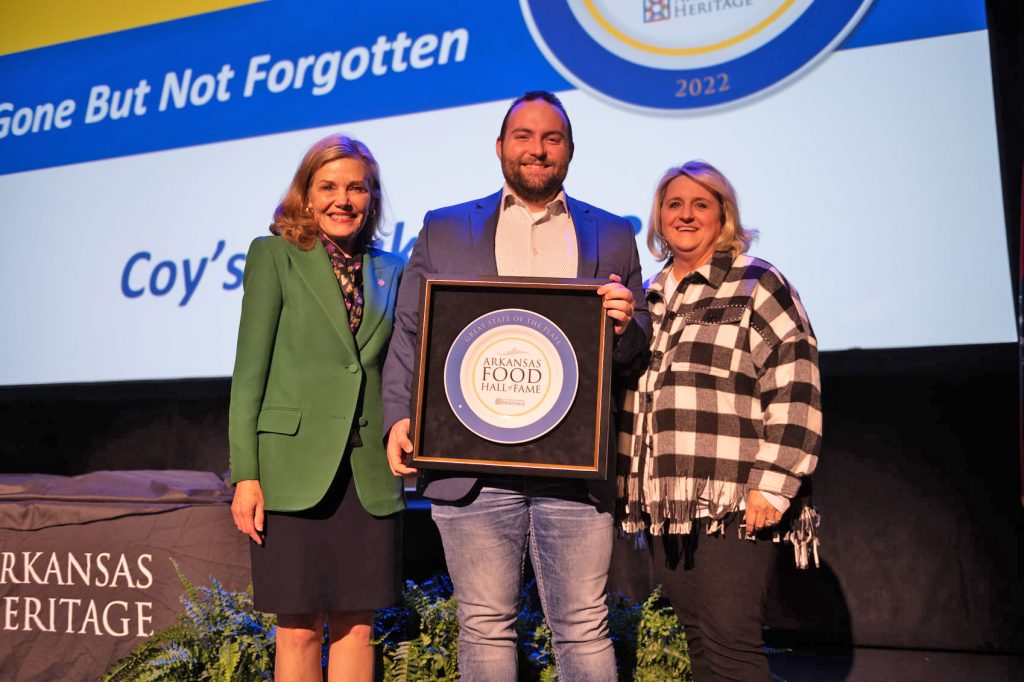 Stacy Hurst, secretary of Department of Parks, Heritage and Tourism, presents the award to Clay Caffey and Tracy Manning Brown of Coy’s.

GONE BUT NOT FORGOTTEN: COY’s

Coy Theobalt opened his eponymous restaurant in a log cabin back in 1945, and later moved it out on the edge of the downtown area to where U.S. 70 came into town. He sold it to Rodney Appling in 1972, but his name was forever attached to the place. The Appling family aged steaks, served fish flown in fresh and eventually opened locations in Little Rock and North Little Rock. Sadly, the Hot Springs restaurant was lost in a fire in January 2009, but the memories of those steaks and warm crackers dipped in house dressing linger. The flavors endure in the newly launched Coy’s Southern Eats, which sells steak seasoning and dressing mix from those original recipes. 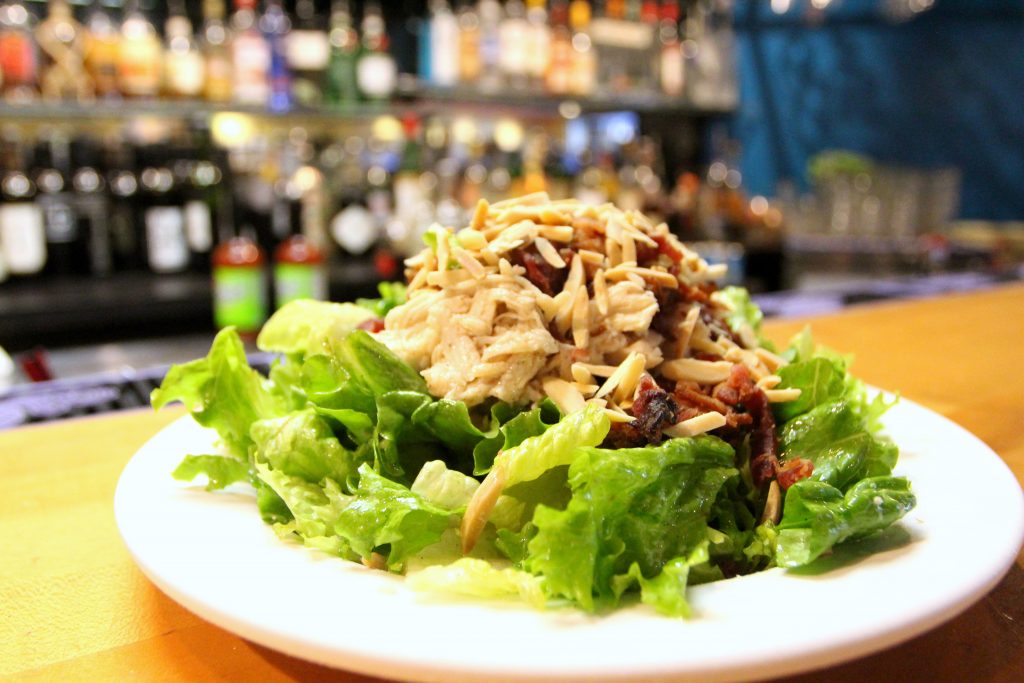 PROPRIETOR OF THE YEAR: Capi Peck and Brent Peterson, Trio’s

When Peck opened Trio’s in Pavilion in the Park in 1986, the building stood on the western edge of town. Today, the bustle of a hungry city moves around the classic location, a destination and longtime local secret for those “in the know.”

Peck and Peterson’s menu blends Arkansas classics and Central and Southern American flavors. Fusion dishes like shrimp enchiladas and pork tenderloin Anasazi sit alongside favorites like the Reuben, Bing cherry Jell-O salad and the famed Peck’s Salad from the Hotel Sam Peck, which Capi’s grandparents owned. The continual evolution of a semiseasonal menu, a commitment to quality ingredients and gracious hospitality have elevated both to the halls of Arkansas’ greatest chefs. 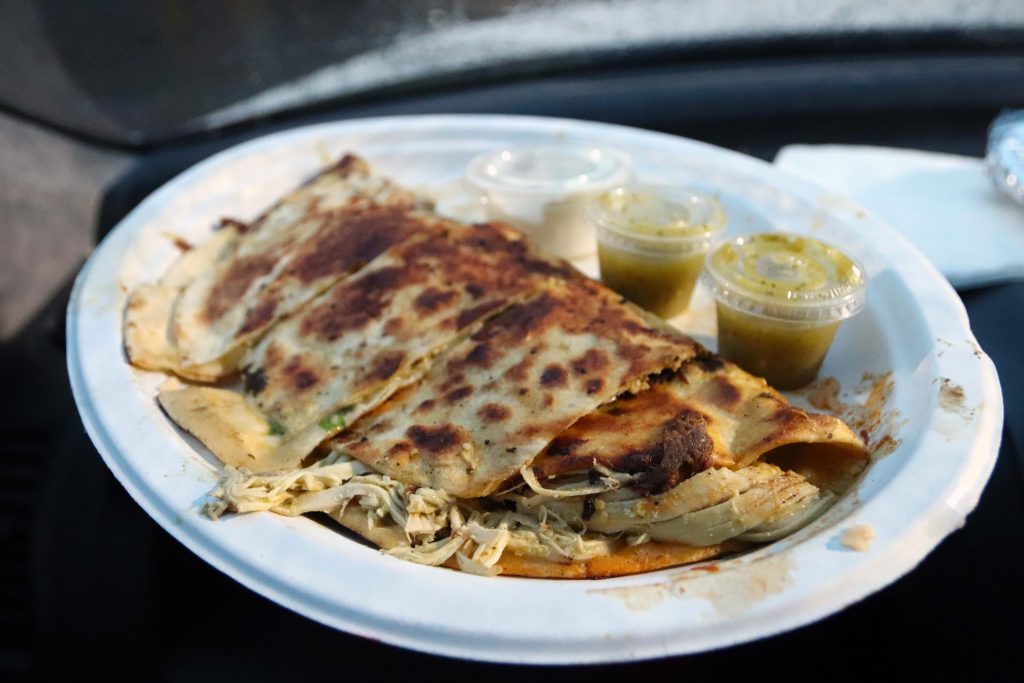 For the first time, a food truck has been added to the rolls at the Arkansas Food Hall of Fame. La Casa De Mi Abuelita’s specialty is birria tacos, particularly the quesabirria, a beef and cheese fold of flavor, prepared from stewed and shredded beef served on fresh tortillas with cilantro and onion. Winner of the 2021 Arkansas Diamond Chef competition, Chef Geovanny Villagran’s experience from years running a burrito truck in Mexico City is quite evident. Villagran and his wife, Neena, turned to the food truck scene when plans for a brick-and-mortar location fell through during the pandemic. Today, they take that truck — and flavors they remember from their grandmothers’ kitchens — on the road to Cabot, Benton, Maumelle, Sherwood and Sheridan.