Northwest Arkansas has experienced tremendous growth with many new restaurants opening in the area in recent years, but one of the best in the area — Herman’s Ribhouse of Fayetteville — has been around since 1964. 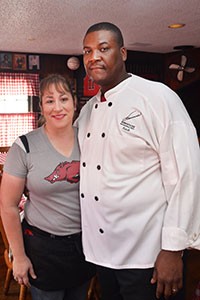 Herman Tuck, the restaurant’s namesake, operated the establishment until 1990 when it was sold to Bruce and P.J. Barnes, who then sold it to Benny Spears and Shelby Rogers in 2000. In 2013, the current owners, Nick and Carrie Wright, began operating the landmark eatery.

Nick and Carrie met at Herman’s while working together. They were married within the restaurant’s walls in 2009. The couple’s love and respect for Herman’s rich history is as strong as their love for each other.

“Herman’s is a one of a kind,” Nick said. “It is a family business, and we provide our customers with a family experience. Our employees are also like family. Many customers have been coming here for generations. Herman’s feels like the center of the universe based on some of the people who have walked through our door.”

Nick, a native of Marvell, said Herman’s employees have a passion for making people happy. “People truly appreciate good food and excellent service,” he said. “We invite everyone to experience the tradition at Herman’s.”

During my recent visit to the restaurant, a nice platter of fresh and tangy salsa with saltine crackers was delivered to prepare my palate for the barbecue and other fabulous offerings that I eagerly anticipated. The salsa was a treat as it featured a unique taste and got my appetite up to speed.

The Herman’s Classic “Gear” Salad features sliced tomato, bell pepper, onion and ham. The salad had great flavor and the vegetables were crisp and tasty.

fall off the bone ribs

The half-rack of baby back ribs arrived at the table along with a bowl of coleslaw. I was excited as the ribs were of the dry rub variety, which is my favorite. After one bite of the fall-off-the-bone, meaty ribs, I had no doubt why Herman’s has been around since 1964. These ribs are probably the most tender I have ever had. Heck, I am an Arkansas State University graduate, but I came pretty close to “calling the Hogs” to proclaim their excellence.

Along those lines, the restaurant features Arkansas Razorback memorabilia on the walls; not the kind you get at a souvenir store. I am talking classic, one-of-a-kind, autographed items. Nick told me that oftentimes the Razorback coaches and players frequent Herman’s.

A filet of tenderloin at a barbecue restaurant? You bet. Herman’s serves them up, hand-cut to ensure freshness. I sampled the 8-ounce filet, which was simply beautiful. This thick, tender cut of beef melted in my mouth like butter, and the flavor was heavenly. It was served with thick, golden hashbrowns, a slice of tomato and a piece of warm Texas toast.

I noticed several interesting menu items that other patrons were enjoying. They included Nick’s Shrimp Remoulade, Herman’s Famous Garlic Chicken, a creation named Bigun’s, as well as hamburgers and sandwiches.

I learned that a Bigun’s is a half-pound, hand-shaped hamburger loaded with sliced tomato, bell pepper, onion, ham and cheese. The

garlic chicken offering is two chicken breasts topped with a Herman’s original garlic-flavored barbecue sauce served with a salad and rye toast. I sampled the garlic sauce. It was finger-licking good.

Be sure to get to Herman’s early because according to locals, there are many days and evenings when the parking lot is full with hungry customers waiting their turn to enjoy the legend of Herman’s Ribhouse.

For a great dining experience in a relaxed, family atmosphere you can’t beat Herman’s Ribhouse in Fayetteville. Once you experience the 52-year-old establishment, you will be back!