A fire in the hearth is a warm and welcoming part of winter for many Americans, but open flames inside the 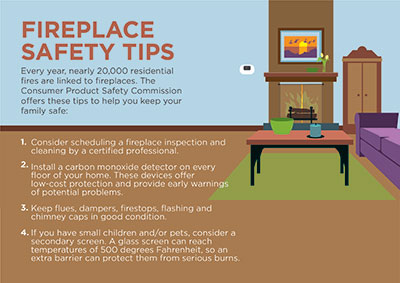 home should always be tended safely. Before you light your fireplace, we’re hoping you consider safety first.

“Carbon monoxide exposure, burns and fire risks are the major hazards associated with fireplaces, but all of these can be addressed with a little planning and preparation,” said Patty Davis, deputy director of communications for the Consumer Product Safety Commission (CPSC).

The federal agency, which monitors risks to consumers and makes recommendations for reducing potential hazards, cites home fireplaces, chimneys and chimney connectors as the leading cause of residential fires attributed to heating equipment.

During a two-year period ending in 2016, fireplaces were associated with 19,800 of the more than 44,000 fires caused by heating and cooling equipment nationwide. Those fires were blamed for 30 deaths and 50 injuries each year, causing more than $127 million in property damage annually.

According to the CPSC, an open and properly maintained flue ensures that fireplace gases can be vented to the outside through the chimney and closed to help keep heat inside the home when the fireplace is not in use.

“Make sure that you have a protective barrier in front of your fireplace to prevent a child or grandchild from coming into direct contact with the glass front of the fire screen,” said Davis. “The surface temperature of the glass front can heat up to 500 degrees, which can cause very serious burns to a child.”

According to Davis, many new fireplace screen sets include protective barriers or external screens designed to add that extra layer of protection to reduce burn risks.

“If you use your fireplace for supplemental heating, you should include a full inspection with your system 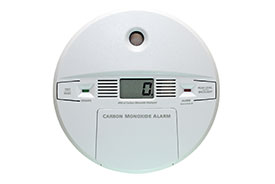 checkups,” said Davis. “You should also make sure you have at least one carbon monoxide detector on each floor of your home to reduce the risks of CO exposure.”

Odorless and colorless, carbon monoxide can quickly build up in the closed interior spaces of a home, leaving all occupants incapacitated, hindering escape. “When a CO alarm is activated, people can get out and then contact firefighters to deal with the carbon monoxide buildup that prompted the alarm.”

While carbon monoxide detectors are now required under many building codes for new construction in homes that include fireplaces, they can be installed in older homes or on floors where they are needed.

“It’s important that people install them on every level of their homes, outside of sleeping areas,” said Davis.

According to the CPSC, fireplaces should be considered fuel-burning appliances, subject to the same safety precautions, inspections and maintenance standards recommended for other items in that category.

“Get a regular inspection, just as you would for a furnace or heating system,” said Davis. “The inspection should be done by a qualified professional, so that means you need to call a chimney company to do it.”

That inspection not only helps to ensure the system is tuned up for efficient operation, but it also gives the homeowner warning of wear or damage that could potentially cause fires or other problems once the season is underway.