As floodwater from late April’s inundation spread southward through Arkansas, its destructive reach expanded to 977,800 acres of farmland, and the dollar value of its damage had grown to about $175 million as of a May 16 estimate.

The estimate was calculated by Eric Wailes, distinguished professor of agricultural economics and agribusiness for the University of Arkansas System Division of Agriculture, based on information compiled by a Cooperative Extension Service team led by Jarrod Hardke, extension rice agronomist for the Division of Agriculture, working with county extension agents and the Farm Service Agency.

“These numbers now include the estimated value of losses associated with delays in planting, changes input 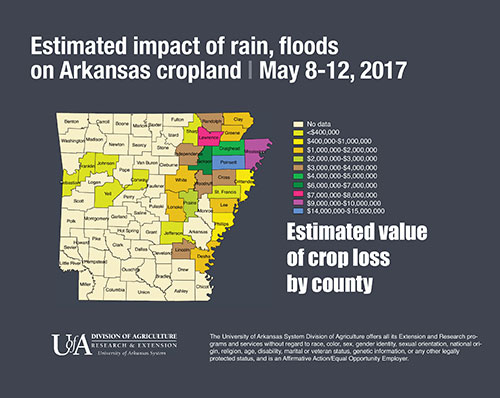 The estimate includes only row crop losses. It does not include damage to livestock and structures such as grain bins. “We also should have some equipment, irrigation and infrastructure numbers by the next estimate,” said Vic Ford, interim associate director-agriculture-extension for the Division of Agriculture. 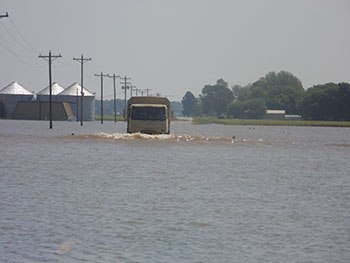 2017’s flooding marks the third time in the last decade Wailes has had to analyze the economic impact of flooding in northeastern Arkansas, the other times being 2011 and last summer. 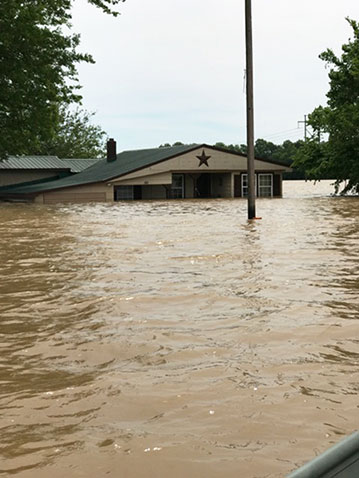 Floodwater engulfed homes, businesses, farmland and vehicles in northeast Arkansas. photos U of A System Division of Agriculture

The Division of Agriculture estimated the 2011 damage to Arkansas agriculture at $335 million. And like this year, the state’s rice crop took the biggest hit in 2011; the $141.87 million in damage to rice made up nearly half of the $335 million net loss.

“While there are many similarities, a key difference in 2017 was that planting was earlier than in 2011,” Wailes said. “This means that farmers had already committed time and resources to getting the crops in the fields. Whether the 2017 event will generate losses as large as in 2011 depends on how quickly the floodwater drains and how quickly farmers can replant.”

However, the Division of Agriculture is expecting the dollar figures from the April 28-30 storms to rise still higher.

Mark Cochran, vice president-agriculture for the University of Arkansas System and head of the Division of Agriculture, predicted the numbers would rise as the bulge of floodwaters headed south and engulfed more acreage and with more rain events in the forecast. He said the figure may wind up being closer to $210 million.

Many crops will also be subject to water-related diseases that can’t be assessed for several weeks.

Farmers have wrestled with razor-thin profit margins for years. However, the cumulative effects of a third weather-related blow in a six-year span are adding up to staggering financial difficulties for some growers.

“While some farmers facing these losses might take advantage of assistance in the form of low-interest loans, many of the most affected farmers probably cannot service more debt even at near-zero interest rates,” said Greg Cole, chief executive officer of AgHeritage Farm Credit. “So grants may be effective in keeping these farms financially solvent. This is particularly true with the late mandated replant date for rice crop insurance, which is so late that expected yields for a late planting with the current market prices will be unlikely prove profitable.”

On top of their troubles is a Farm Bill-mandated replant deadline for rice that many believe is untenable. Arkansas’ congressional delegation and Gov. Asa Hutchinson have asked Agriculture Secretary Sonny Perdue to mitigate the impact of the replant provisions by:

Without action, “Excessive, additional financial hardship will be placed upon producers already facing significant challenges if this flexibility is not provided,” Hutchinson said.

The sentiment was echoed by the Arkansas Rice Federation.

“Congress has been pushing farmers towards crop insurance for several years, and Arkansas farmers have done their part by obtaining coverage,” said Ben Noble, executive director of the Arkansas Rice Federation. “Crop insurance alone won’t be sufficient for many of the impacted Arkansas farmers. Congress and USDA need to seriously consider disaster grants to address this immediate need, and pursue significant crop insurance reform for the long term.”

Rob Roedel, communications manager for the Electric Cooperatives of Arkansas, contributed to this article.