Songwriter Albert E. Brumley hoped to cement his legacy through a foundation for music. His granddaughter, Betsy, made that dream come true. 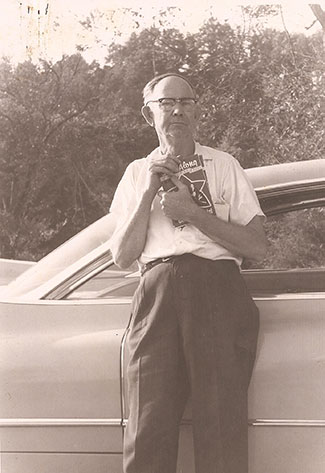 Albert E. Brumley, clasping a beloved songbook. Brumley is hailed as one of the preeminent gospel composers of the 20th century. He worked in Arkansas at the Hartford Music Company. photo courtesy of Brumley & Sons Music

If someone asked you to name a spiritual song, two choices would probably come to mind — “Amazing Grace” and “I’ll Fly Away.” The latter was written by the late Albert E. Brumley, a Church of Christ member who was one of the most prolific gospel songwriters of his day. Brumley wrote songs like “Turn Your Radio On,” “I’ll Meet You in the Morning” and “He Set Me Free” and hundreds of others. He learned his trade in the 1920s at the Hartford Music Institute in Hartford (Sebastian County) and later wrote for, then eventually bought, the Hartford Music Company.

He officially penned “I’ll Fly Away” in 1929, although its roots came a few years earlier. Originally inspired by a secular ballad, “The Prisoner’s Song,” the idea came to Brumley while picking cotton on his father’s farm in Rock Island, Oklahoma. It took him about four years to fully develop the song, his granddaughter, Betsy Brumley, said. It went on to become quite possibly the most famous gospel song of the 20th century, recorded by dozens of artists including The Chuck Wagon Gang, George Jones, Gillian Welch and Alison Krauss. It is popular in hymnals and at bluegrass jams. It will even be used in the upcoming “Madea” movie by Tyler Perry.

“I think it is because it is a simple song with a simple melody,” said Betsy, who now chairs the I’ll Fly Away Foundation. “Grandpa used to say if you can’t sing the chorus after hearing a song one time, then it’s too complicated and people will not remember it. ‘I’ll Fly Away’ is very easy to sing and easy to remember.” 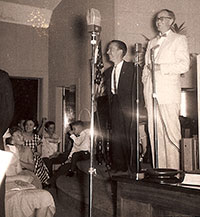 Today Albert E. Brumley’s legacy lives on with the foundation. Music had been a sort of compass in Betsy’s life, and she felt harnessing its power via a nonprofit would be a good opportunity to help others. However, neither she nor her husband, Kevin Bernier, had any nonprofit experience. After a few months of prayer and reflection, they stumbled upon a blue folder containing plans for “The Brumley Foundation.” Betsy and Kevin took their life savings, filed the paperwork and created the I’ll Fly Away Foundation, choosing the name because they felt the song was universal, given how often it had been recorded worldwide. The foundation is funded by private donations.

The organization’s goal is “to inspire and empower our children through music,” with a special emphasis on songwriting, Betsy said. Launched in 2014, the You Can Fly Songwriting Program helps children learn to write songs. In her work, Betsy often explains the why of what they do. Songwriting, she tells people, teaches the many aspects of writing — the brainstorming, the outline, the rough draft, etc. — in a fun way that helps the songwriter learn and retain information. 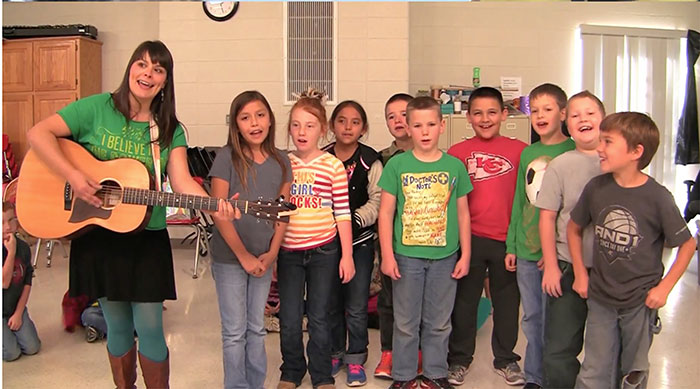 Mrs. Arnall’s third grade class in Rocky Comfort, Missouri, sings an original work, “The Water Cycle Never Ends” with songwriter Shannon Wurst, during a session of the You Can Fly Student Songwriting program. The program, founded in 2014, has served more than 7,000 students in Northwest Arkansas and southern Missouri. COURTESY OF THE I’LL FLY AWAY FOUNDATION

Betsy said the roots of this specific mission lie in her undiagnosed childhood dyslexia. In the first grade, her teacher, Mrs. Rowe, chided her for spelling her name “Besty,” the result of her disability. Growing up she had watched her grandfather writing songs and found it fascinating. So young Betsy wrote a tune that helped her to spell her name correctly. She continued to use songwriting to learn throughout her academic career and on into college.

“To me songwriting is the perfect marriage between helping a child creatively learn while also assisting them to express themselves through art,” Betsy said. “A good song is immediate and powerful. Just think what a child can remember when he or she writes a song from their heart. Once a child is taught how to write songs, they have a whole set of skills they will utilize their entire life.”

She said songwriting also opens up a creative avenue for a child to verbalize their emotions. “How many times have you seen a kid do something that we don’t understand, especially in a tragic situation, and said, ‘If only we knew what they were thinking?’ I believe songwriting is the key to finding that answer. Music is pure emotion. If we pay attention to what kind of music our children are listening to, it will tell us what is going on in their lives.”

The Power of Music Festival

Children are not the only beneficiaries of the I’ll Fly Away Foundation. The other branches of the organization include the Power of Music Festival, established in April 2017, and the Ozark Regional Song-writers Association, developed in October. All three branches enable learning and creative self-expression through music. Essentially, the three programs are working to build a nurturing place for creativity to flourish, for kids to find a voice, for musicians to find their passions and for the region to support great artists.

The second annual Power of Music Festival, presented by Coca-Cola, took place in late April in Bentonville. The event drew leaders and tastemakers in the music industry from all across the country. It gave musicians and songwriters the opportunity to network and learn from those who have had success in the industry. 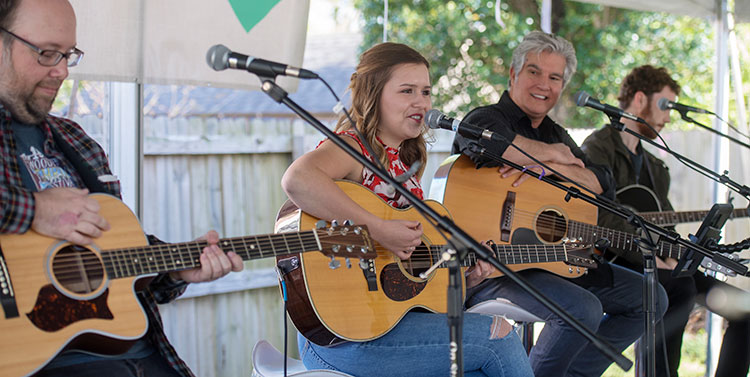 At the Power of Music Festival held in Betonville in April, local, regional and nationally known songwriters gathered in intimate venues to perform and share stories and tips about succeeding in the industry. photo by Meredith Mashburn

This year’s event included music by local acts like Willi Carlisle, national acts like The Accidentals and a special performance by Songwriters Hall of Fame inductee Steve Dorff, whose credits include George Strait’s “I Cross My Heart” and Kenny Rogers’ “Through the Years.” The legendary Al Bell of Stax Records in Memphis also spoke on music publishing and copyrights.

The foundation created the final arm — the Ozark Regional Songwriter’s Association (ORSA) — to give area songwriters a network of people to support them. Each month the foundation hosts a showcase so the members can share their original songs with each other and with an audience. They get feedback as they share their songs, plus it’s a great way to meet other like-minded songwriters. Betsy said they are already seeing a lot of collaboration happening within the group, one of the group’s original goals. She said the benefits for songwriters are collaboration, creativity and community.

“Being a part of ORSA opens a songwriter up to a network of people to help them grow,” she said. “There is so much opportunity to learn from each other. When these songwriters team up and start creating new songs, the results are just amazing. We have seen one of our ORSA member songwriters go to Nashville and compete in the finals of the songwriter competition at Tin Pan South. That’s huge! And building a regional network of musicians also helps build an audience, which helps our musical community grow.” 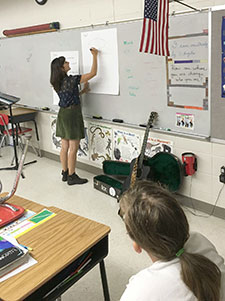 The You Can Fly Student Songwriting program has grown by 300 percent in the past year, and will hire three more songwriters to meet growing demand. COURTESY OF THE I’LL FLY AWAY FOUNDATION

Fayetteville singer/songwriter Candy Lee works for the I’ll Fly Away Foundation as the lead songwriter in the You Can Fly Songwriting Program. For the past three years, she has taught songwriting in the public school system through the program to third- and fifth-grade students. She spends an entire week with each class in the county. Lee teaches songwriting by explaining how a song is constructed. The students then absorb the lesson as they write a song together as a class about topics they’ve been studying.

“I absolutely love this program and think it is a very important experience for the students,” Lee said. “Not only do they learn how to write songs, but they learn more about their own curriculum in the process. I love working with kids, and I’m kind of a nerd anyway, so this program is right up my alley. My own songwriting has also improved through my involvement in this program, and I’m very grateful to be a part of it.”

Lee said that songwriting is a powerful tool for memorization and learning. She said the proof is in the results: the test scores of the students who have been through the program have improved since the foundation has been teaching songwriting in their classrooms, she said, and attendance during the program last year was 100 percent.