People in small towns take great pride in taking care of their own. Such is the case with The Nest Drive-In at 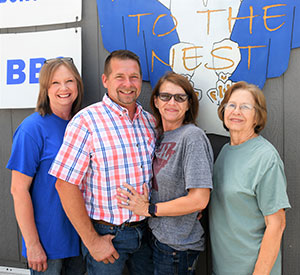 The Nest team, from left, is: Michelle Cook and Ken, Sherrie and Glenda Futrell.

Ken and Sherrie Futrell opened The Nest in 2016 after a short stint with a food truck that simply couldn’t accommodate their growing customer base. Today, the community has adopted the roadside establishment as a Cherry Valley institution. The mascot for the Cross County School District is the Thunderbirds, thus the restaurant’s nifty name.

“I grew up here and know everyone,” Sherrie said. “If I don’t know customers, I will before they leave. Our kids had no place to go, and the local farmers didn’t have any restaurants nearby, so we opened The Nest. We open after school events like football games to give people a place to gather and enjoy a great meal.”

Ken’s mother, Glenda, and sister, Michelle Cook, also help with operations, as it gets quite busy at times. They have a drive-through window to better serve customers on the go.

The Nest opens at 6 a.m., and the breakfast menu is pretty darn good.

The Nest’s Big Breakfast is a winner. It comes with a choice of two meats (bacon, sausage, ham or bologna), two eggs cooked to order, two big biscuits, hash browns and a choice of yumm-o chocolate gravy or stick-to-your-ribs white gravy. The Pancake Platter is another option for a different big breakfast, featuring five made-to-order, fluffy pancakes. A large variety of breakfast biscuit sandwiches and omelets also are available.

In addition, The Nest’s menu includes grilled cheese sandwiches (add an egg, bacon or bologna for a little 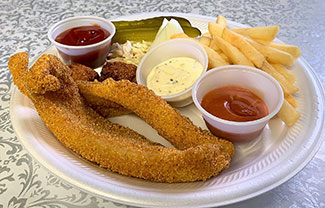 During my visit, I sampled the two-piece catfish plate and was quite pleased. The golden filets were crispy and piping hot on the inside. The fish was served with a tangy vinegar-based coleslaw that I loved, along with fries, hush puppies, onion and pickles.

The barbecue at The Nest is produced via a smoker that Ken built. Be sure to sneak a peek at the smoker, as it 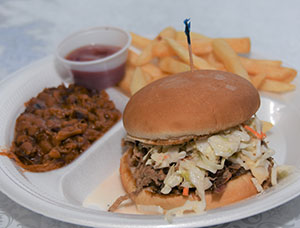 Tasty barbecue offerings — such as the slaw-topped, pulled-pork sandwich, shown here with beans and fries — are produced by The Nest’s unique smoker.

is a unique piece of country folk art that any do-it-yourselfer will truly appreciate.

While looking at the smoker, try a barbecue sandwich like I did. You will love the flavor of the shredded, smoked pork topped with that delicious homemade coleslaw. I have no doubt that any true barbecue lover will adore the baked beans at The Nest, where they dress them up nice with chunks of tender, smoked pork.

If you like Philly cheesesteaks, don’t miss The Nest’s, featuring layers and layers of steak, loaded with perfectly melted cheese and mushrooms, bell peppers and onion.

The hamburgers at The Nest are hand-patted, and Ken insists a true hamburger lover can spot and taste the difference immediately. Ken has an advantage, as his dad once owned and operated a dairy bar, where he learned the art of making an excellent hamburger.

They served me a double cheeseburger that got better with each mouthful. The nicely grilled beef, topped with melted cheese, was layered with pickles, lettuce, onion and a slice of homegrown tomato. Wow. I also savored the onion rings that complemented the rich flavors of the cheeseburger.

Old-fashioned, hand-dipped milkshakes were added a few years ago, but a problem occurred almost immediately. One mixer couldn’t keep up with the demand; The Nest had to add another mixer so more customers could enjoy them. Milkshake flavors include chocolate, vanilla, strawberry, blueberry, peanut butter and peach. I tried the peach and loved it. 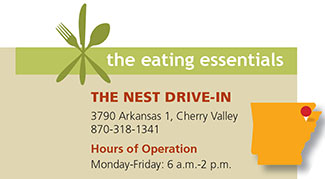