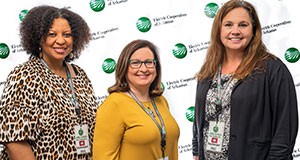 But on this spellbinding March Saturday, the “h” words inside the Vines Center of the Arkansas 4-H campus in Little Rock include “handyman,”  “honeybee,”  “historical”  and this toughie, “horologist” (defined as, “a maker of clocks or watches”).

The occasion is the annual Arkansas State Spelling Bee, the second to be sponsored by the Electric Cooperatives of Arkansas.

Last year’s Bee, held in early February, beat the COVID-19 pandemic and its protocols by a month. But this year, health precautions have to be taken. Face masks are worn by parents and children, removed only to spell a word. Only one guardian per participant is permitted to attend the event that is otherwise closed to the public. Other family and friends watch virtually via livestream.

“It was a privilege to ensure that these great students were able to compete for the honor of Arkansas State Spelling Bee champion,” says Rob Roedel, corporate communications director for the Electric Cooperatives of Arkansas. “Although only one participant was crowned as champion, we consider each of the students winners as they displayed poise and intelligence beyond their years. We look forward to hosting this event for years to come to continue our longtime tradition of supporting the youth in Arkansas.”

Before the spelling, a little math: What began with 42,243 students from 294 schools in 57 counties across Arkansas has been pruned to 47 finalists. The students range from third graders to eighth graders, hence two microphones on the stage positioned at different heights.

Serving as this year’s pronouncer — and re-pronouncer and definition provider and sentence giver — is Little Rock radio legend Tom Wood. His familiar voice provides a feeling of comfort, even when it’s later challenging contestants with words like “fulgent” (“dazzlingly bright and radiant”).

And everyone is looking quite fulgent, not to mention “golden,” “sturdy,” “strong” and “bubbly” — to borrow a few early competition words — during a smooth, relatively simple practice round. One by one, students’ successful attempts are rewarded by a cheerful chime. Each “bookworm” has clearly spent “months” studying and is really using his/her “noggin.” The round, in which the sad incorrect noise sounds only twice, is mostly “blooper”-free.

A war of words

An early favorite to win is Thomas Christopher Sinclair, the Garland County sixth grader who won the 2020 competition. Unable to represent Arkansas last year at the Scripps National Spelling Bee, which was 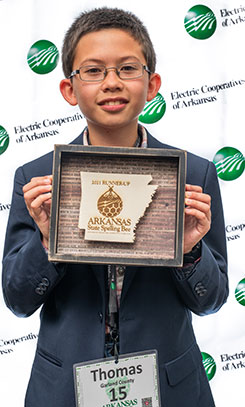 canceled due to the pandemic, he could finally get his shot this year. So when “favorite” is announced as Thomas’ Round One word to spell and he nails it, it seems almost prescient that he will “reign” — another competition word — again.

Other Round One words include everything from “literacy” (something such  outstanding  students  know well) to “detention” (something such outstanding students surely will never know). Only a few words, like “cornily,” “minority,” “jewel,” “intellectual” and “millionaire,” cause students to stumble. Not to be confused with “scumble,” a Round One word meaning “to soften the lines or colors of a drawing by rubbing lightly with a finger.”

Only the most “stalwart” (“brave, valiant, resolute”) can survive the rockier Round Two, featuring words like “noctambulist” (“one who walks at night, especially when sleeping”), apotheosis (“the raising of a person or a thing to divine status”) and chinook (“a warm, dry wind that comes down from the Eastern slopes of the Rocky Mountains”). And suddenly, more than half of the contestants are eliminated, as if blown away by that last word.

Round Three is just as tricky, with stumpers like “coaxation” (“croaking, especially from frogs”) and “nuciform” (“like a nut in shape”). Several more students are eliminated, and only 10 are left, giving us a mini case of the “megrims,” a Round Three word for low spirits.

The next round is similarly arduous. Not to be confused with “ardoise,” a Round Four word meaning “a grayish-purple color.”

Only five are left for Round Five: Thomas, whom we introduced previously; Sanjay Vontala of Benton County; Aiden Watson of Columbia County; Avery Grayson Williams of Grant County; and Charles Akin 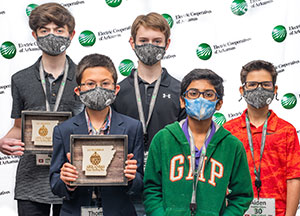 Sanjay, Aiden and Charles tie for third place, each winning a $100 cash prize. Thomas — who conquers “batten” — and Avery — who crushes “slickensides” (“a smooth, striated, polished surface produced on rock by movement on a fault”) — advance to the next and final level, Round Six.

The word that trips up Thomas in this two-man competition is “mancala,” which happens to be a two-player game in Africa and Southern Asia. As a result, Thomas secures second place, a plaque and a $300 cash prize.

After accurately spelling “Aries,” Avery’s final word is “obtenebrate,” which means “to darken by or as if by shadowing.” With judges deeming his answer correct, Avery, has obtenebrated the competition to become the 2021 Arkansas State Spelling Bee Champion.

A way with words

Avery, a 13-year-old eighth grader at Sheridan Middle School, says, “I was not expecting to win. I’m very glad 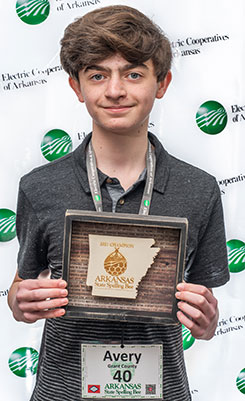 that I did; it’s a wonderful experience.”

A wonderful experience that’s just getting started. As champion, Avery receives a plaque, a $575 cash prize, a 2021 U.S. Mint Proof Set and one-year subscriptions for Britannica Online Premium and Merriam-Webster Unabridged Online. He’ll represent Arkansas in virtual rounds of the Scripps National Spelling Bee, and if he’s a top finalist, he’ll travel to Orlando to compete in the July 8 event, televised on ESPN2.

Avery credits “tons of studying” for helping him get ready for the Bee. His parents, Summer and Nick Williams, also have helped him to prepare. Summer, an educator, once participated in spelling bees herself.

“He has always been really good with language and spelling, and he studied hard,” Summer says. “Most nights, we would get together, and we would go over (words), and he always makes connections and asks a lot of questions.”

A question for Avery: In these days of spell-checkers and autocorrect, just how significant is spelling today?

“I think it’s still very important,” he says. “Although it may not be as important to write everyday things, there’s a history to every single word that’s very interesting.”

So interesting that it might be his career path one day. He mentions linguistics as a possible course of study in the future, but, he says, “I’m not entirely sure.”

He is confident about one thing, however. He says, “I think this will for sure help on my resume.”