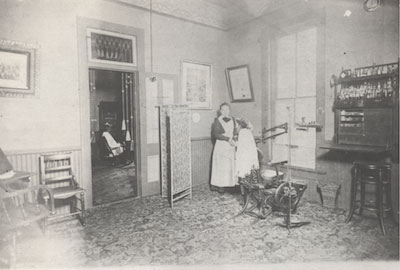 One hundred years ago, in the fall of 1917, World War I was nearing the end of its third year in Europe, and Bolshevik revolutionaries were seizing power in Russia. However, in Fort Smith, women were choosing change by the ballot, not the bullet.

On Nov. 13, 1917, Dymple Johnson — who also holds the title of being Arkansas’ first female dental hygienist — became the first woman to vote in a public election in the entire South.

The historic race to be first

Arkansas was the first Southern state to allow any voting by women. In February 1917, the Arkansas Legislature had passed and Gov. Charles Brough signed into law a measure allowing women to vote in party primaries, to be held in May 1918.

But months before any other Arkansas women could vote in those elections, Fort Smith that day had a special mayoral election to replace ousted Mayor John Heskitt Wright (who, oddly, was one of the candidates on the ballot to replace himself). Local officials considered it a primary, making it the first time a woman could vote in the South.

The historic nature of the vote was well-publicized at the time. In fact, Mollie Williams, a local  teacher, immediately contested the claim, believing she had cast the first vote. According to the Fort Smith Times Record, it was determined that her polling station in the second precinct of the Fourth Ward opened late, a few minutes after 8 a.m. The poll books recorded the time of Johnson’s vote as well as the place — the second precinct of the Second Ward. She beat Williams by a matter of minutes.

The story of how that special election came about in the first place is colorful history, and integrally tied to other newly politically active Fort Smith women that fall.

In a sense, women caused the election that led to the first votes by women in the South. Fort Smith was a hotbed of labor activity in the early 20th century, and women were no exception to workplace activism. In early September 1917, women employed at the Holland-American Fruit Products Co. won the right to be paid a daily wage instead of a piece-rate, a nine-hour work day and the right to overtime pay for anything longer than nine hours a day. Their success may have inspired what happened next at Southwestern Bell in Fort Smith. 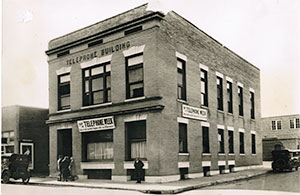 Picketing in protest around the company’s main offices at North Ninth and South A streets, the women were joined by men from other unions. Although the exact circumstances are unclear, a group of people dug up in an alley and destroyed a gas line leading into the building. One account pins the blame for the vandalism on a group of delinquent youths who had come down to watch the commotion at the telephone company. Another finds the strikers guilty.

Nevertheless, Wright and the Fort Smith Police Chief Fernandez were present or perhaps even witnesses to the incident, but did not arrest or stop the perpetrators. That tense night, an exchange of gunfire almost took place between local law enforcement officers and the armed guards hired by the telephone company when the latter drew their weapons on the officers inside a stairwell of a hotel. Eventually, the scabs made their way safely to a train station and out of the city.

A city at a standstill

Meanwhile, phone service continued to suffer and virtually cease, greatly disrupting city business. Despite numerous attempts by other unions and Fort Smith businessmen to negotiate an end to the dispute, Southwestern Bell was intransigent. Eventually, a general strike of all the unions in the city that lasted for several days prompted federal labor mediators to step in. The general strike ended, and by the end of the year, the telephone company recognized the union and rehired the two fired organizers. The women’s mini-revolution was bloodless, but ultimately victorious. 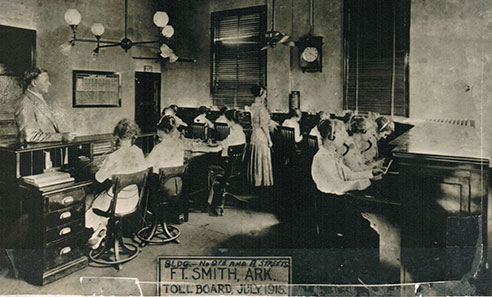 Telephone operators photo, Courtesy of the Fort Smith Museum of History. Per the report of a federal commission and the testimony in federal court of striking telephone operators, Southwestern Bell underpaid the female operators, forcing them to live with family or work extra jobs because they could not earn a living wage in 1917.

A special election was called for November 13. Inexplicably Wright was allowed to run again. Monro beat him in the primary race by about 200 votes and went uncontested in the general election two weeks later.

It’s unknown how or why Dymple Johnson voted in that primary, but vote she did. In doing so, she became a pioneer of women’s suffrage in the South, yet a century later, her first vote and the complex series of events leading up to it have largely been forgotten.

This Nov. 13, take a moment and remember the overlooked Arkansas woman who made history in the South 100 years ago.

Historian Ben Boulden is a Little Rock based communications professional, and the author of The Hidden History of Fort Smith, Arkansas (The History Press, 2012). The story of Dymple Johnson and the Southwestern Bell telephone operators’ strike was one he uncovered in research for his book, available at online booksellers.