This month, Franke’s Cafeteria will blow out 100 candles on its birthday cake. Perhaps more 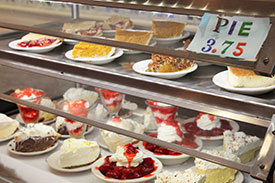 Deciding to have dessert at Franke’s is as easy as pie.

The creamy, lightly spiced signature dessert is one of the savored specialties at Franke’s — which claims to be “Arkansas’ Oldest Restaurant” on its plastic trays — that has kept customers coming back for a century.

Customers like Kathey Wilburn of Little Rock, who often dines at the Rodney Parham location. (“Monday, it’s liver and onions. If it’s Tuesday, I’m going to come by for chicken livers.”) For her, Franke’s isn’t just about food, it’s about family tradition.

Overhearing Sandra Jones, a line server for more than 30 years, being interviewed in the dining room, Wilburn comes over, puts her arm around Jones and shares, “When my 36- and 33-year-old daughters were little, I mean young girls, we’d come to Franke’s out on University Avenue, and it would be my mom, myself, my girls, my aunt and uncle, their kids. And we would all go in, and (Jones) would always serve my girls ham with pineapple sauce.”

To Wilburn, Jones and the rest of the staff set Franke’s apart from other restaurants.

“They kind of become family, and they’re as much of a comfort as the food is,” she says. “You’re not herded here. You’re treated with respect.

“And you just feel like you’re at a relative’s house, and they’re asking you what you want for dinner.”

What C.A. Franke opened in 1919 wasn’t a cafeteria, but a downtown Little Rock doughnut shop, according to Franke’s website. That led to the establishment of a large downtown bakery. “Soon a fleet of trucks, nicknamed ‘wife savers,’ could be seen delivering fresh baked goods door to door in neighborhoods throughout the city,” the website says.

“In 1960, the original cafeteria closed its doors, but not before inspiring newer locations around the state,” the website says. “Franke’s has had many locations including Hot Springs, Fort Smith, North Little Rock’s McCain Mall and Little Rock’s University Mall.”

These days, Franke’s  — which in 2018 was inducted into the Arkansas Food Hall of Fame — has a 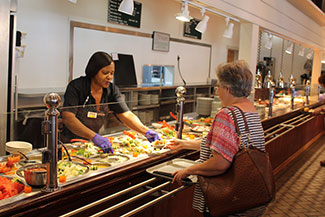 Opal Forte serves a salad to a Conway location customer. As for her personal Franke’s favorites, she says, “I love the turkey and dressing, and I love the dumplings! Oh the dumplings — they’re off the chain! … And I love the desserts — they are so fantastic!”

downtown cafeteria, as well as the “Sack It” by Franke’s grill in the Regions Center, 400 W. Capitol Ave. Franke’s has a west Little Rock location in the Market Place Shopping Center, 11121 N. Rodney Parham Road.

And, Franke’s now has a Conway location, 1101 Fendley Drive, that just opened in May in a former Dixie Cafe location.

That’s not all that’s new at Franke’s. Starting with the ownership.

Following the December 2016 death of her daughter, Christen, and the March 2017 death of her husband, Bill, Carolyn Franke sold the restaurant to general manager Abraham Delgado in August of 2018.

Delgado had a condition, Carolyn says: “He says I’m the face of Franke’s, and he won’t work without me. People love seeing me there. They love talking to me. … They say, ‘I’m surprised you’re here, aren’t you retired?’ And I say, ‘What else would I do?’”

She can often be spotted at the Rodney Parham location, she says, “primarily out in the dining room just talking to people.”

And employees like Jones are glad she’s still a Franke’s fixture.

“Management is kind of special,” she says. “Mrs. Carolyn — she’s special. I like working with her and for her.”

A side of hospitality

Franke’s most popular meat is the hearty roast beef. The most requested side is the cheesy, bready escalloped eggplant casserole that might be more starch than vegetable. And the most desired dessert is the aforementioned egg custard pie, though the “sweet, gooey” Karo nut pecan pie got a nod in a 2015 Zagat.com article, “50 States, 50 Desserts.”

“We use the same recipes that we did in 1919,” Carolyn Franke says. 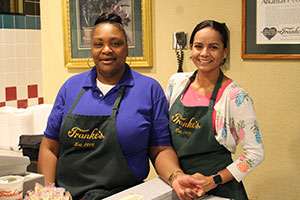 Service with a smile: Downtown supervisor Cassandra Hussey (left) — joined by manager Yessica Guerrero — has worked for Franke’s for 30 years.

It’s this consistency that has kept customer Thelma Hare of Conway dining at Franke’s since she was a McCain Mall employee decades ago.

“I worked at Dillard’s back in the ’70s and ’80s, and I ate there every day,” she recalls after a weekday lunch with her family at the Conway location.

As for what she likes, she says, “Everything. Their salads, and oh, gee whiz, just the good old country food. Macaroni and cheese and lima beans — just all of it. … Everything is always so tasty and good.”

Customer Ralph Williams, a regular at “Sack It” by Franke’s, says he comes in as much as three times a week, praising “the freshness of the food.”

On this Thursday, he tells supervisor Brenda Adams, a Franke’s employee of 43 years, he’s going to pass on the Philly steak combo special of the day. “I’m trying to cut back,” he says, opting for a salad from the salad bar. And a plate of french fries.

Paige Turner, manager of the Rodney Parham location, says it’s not just the food that inspires Franke’s regulars. It’s the treatment as well as the treats.

“The way we communicate with customers is different than other restaurants,” Turner says. “When people come in here and they start down the line, the first thing they’ll hear is, ‘How are you doing?’ ‘How is so-and-so?’ ‘Oh, they’re at college?’ ‘When are they coming back?’ ‘We’d love to see them.’ … It’s not just, ‘What do you want to eat?’”

Carolyn Franke says it’s this interaction that she values most. “I’m just a talker,” she says with a laugh. “I always want to have a lot to talk to people about. They want to talk to me, and they’re glad I came by, and they say, ‘Thank you for still being open.’ And I say, ‘Where else would we be? We’re 100 years old! We’re going to go on.’”