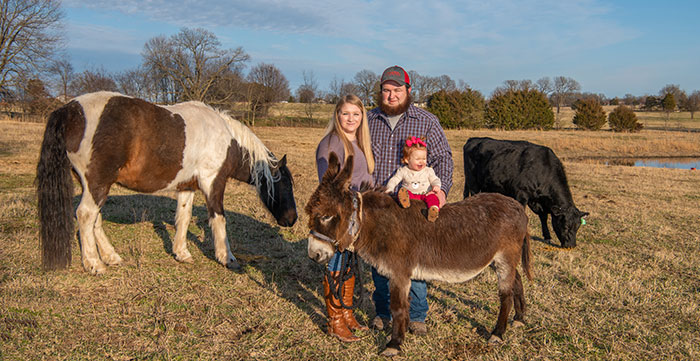 From left: Robbin, Cory and Allie Plumlee pose with Violet, the donkey, and her pasture pals Raz, the horse, and Molly, the heifer.

Violet of Oak Grove’s Plumlee Farms is a guide animal for the visually impaired. But the furry, chocolate-brown cutie isn’t a dog. She’s a donkey.

Violet recently enjoyed camera time on ABC’s Good Morning America, where she was honored in a “Pet of the Week” segment.

Robbin Plumlee, a Carroll Electric Cooperative member, says she nominated the miniature donkey “because of all the great things she’s done for us the last couple of years.”

It began in 2017 when the Plumlee family, which runs a small beef cattle operation, took in a blind rescue heifer 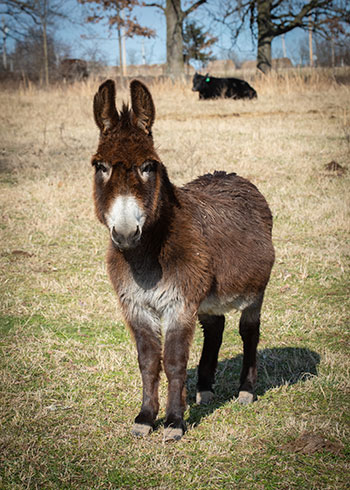 “She couldn’t get around by herself,” Plumlee says. “Couldn’t get to water or feed or anything like that. I was pretty desperate at that time to get some help.”

Plumlee says a friend offered, ‘Hey, I’ve got this donkey. You should take her and see if she would be able to help you in any way.’ So, I drove over and got her and paired them together.

“Basically, my only expectation for Violet was just to be a companion and not anything more. And she ended up exceeding those expectations.”

The two initially were penned in a small lot when the Plumlees noticed Molly following Violet. Though occasionally Violet would get far enough away that Molly couldn’t keep up.

Plumlee’s husband, Cory, had the idea to put a bell on Violet. And Molly responded.

Then, Plumlee says, “We turned them out to one of our 20-acre pastures … and kept a very close eye on them.
And, sure enough, Violet was able to guide (Molly) to the pond, to the hay, to feed. “It was absolutely amazing.”

Also amazing was the change in Molly.

“After Violet showed her around for a year or so, she had that whole property memorized,” Plumlee says. “She knows where gates are. She knows where the pond is. She’s a lot more independent now because of Violet.”

In 2018, Violet would have the chance to work her farm charms again.

Raz, one of the Plumlees’ horses, had gone blind due to equine glaucoma.

“The horses didn’t understand what was going on when (Raz) was bumping into them,” Plumlee says. “He was very nervous. And the horses rejected him from the herd. They started running him around. He actually ran through a fence, and he became a danger to himself.”

They tried grouping Raz with Violet and Molly.

“It worked,” Plumlee says. “Raz immediately bonded with Violet and immediately calmed down. … They all live together, and they mingle. … They’re so respectful of each other. They can run into one another, and they don’t get upset or spooked or kick.”

So that Violet didn’t get spooked, her GMA segment — with her sporting a Kansas City Chiefs’ ensemble the Friday before the Super Bowl — was filmed at the farm in Arkansas.

But, producers had other ideas at first.

“They actually asked us if there was any way possible that we could bring (Violet) to New York,” Plumlee says. “We looked at all sorts of options, and it was just not feasible. It wasn’t going to work out.” Though the show would have paid for travel, the cost would have been exorbitant. One flight they researched would have been $15,000 — one way.

Besides, Plumlee says, she couldn’t see navigating New York City with a donkey — even one as easygoing as 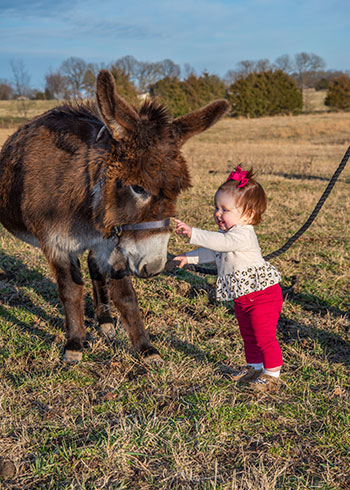 “Allie loves Violet. I really think she thinks Violet is a stuffed animal and just wants to love on her all the time,” says Robbin Plumlee about her 1-year-old daughter.

“Flying. Going through Times Square. I can’t imagine,” she says with a laugh.

That Violet bore two foals might explain her maternal nature and patience toward her pasture posse.

Plumlee says, “I don’t know if she knows they’re not able to see, but she understands, ‘These animals bump into me. And they follow me around,’ and she just lets them. … She’s very nurturing. We call her the mother hen; she’s just so sweet.”

And Violet has been rewarded sweetly too. From GMA, she earned a medal. And from the Plumlees, she received produce.

“We gave her so many apples! Violet loves apples.” Even if she passed up a trip to the Big Apple.