Back around 1950, it was a big deal to make a long-distance phone call on Christmas Eve from my boyhood 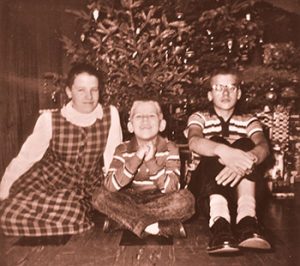 Writer Jack Schnedler (right) was 12 or 13 when this Christmas photo with his brother, Joel, and late sister, Jean, was taken.

home in Missouri to my mother Martha’s relatives in Arkansas. Long-distance calls, placed through the operator, were expensive. And my parents’ income was modest.

But wishing our Stuttgart kin “Merry Christmas” was essential to the holiday magic. Along with my younger sister, Jean, and younger brother, Joel, I’d swap greetings with Grandma Spilker, Aunt Clara, Uncle Mike and cousins Gaye, Mike and Jill. Or as many of them as time allowed.

We’d try to heed Martha’s reminder to keep the talking short, “because those minutes add up fast.” There wasn’t time to tell what Santa had delivered to our bungalow in St. Charles, just over the Missouri River west of St. Louis.

My father, Kurt, a St. Charles native, made a big deal out of gift-giving — no doubt beyond the bounds of the modest household budget. Although lacking a Santa Claus costume, he did have a full-figured stomach that could shake like a bowl full of jelly. Some years, he wrote Martha a Christmas poem in rhyming doggerel that brimmed with love.

Martha had much earlier holiday memories as the fourth of seven children on a hard-luck farm near Stuttgart. In terms of gifts, her early Christmases around World War I were barebones. She and younger sister, Clara, owned one doll each. In years when money was extra-tight, their gift would be a new doll’s dress sewn by mom. That would be it, plus maybe an orange — a rare winter treat a century ago.

But she remembered Christmas on the farm, including carols sung around a rickety old piano, as being full of joy. Her three older brothers — Louis, Bill and Fritz — shared tree-watching duty. Before electricity spread across rural Arkansas, their mission was first to light the wick of each candle on the evergreen, then to keep a close eye lest the needles be ignited by a flame, and finally to make sure all the candles were out.

Growing up in St. Charles, my siblings and I were gifted with ample largesse. We got a warm-up for Christmas on the evening of Dec. 5, when we’d each put an empty soup bowl on the kitchen table before going to bed. Next morning, it would be brimming with unshelled pecans and walnuts, a couple of candy bars and an apple.

The occasion was St. Nicholas Day, a lesser holiday with Dutch roots. It celebrated the reputation for generosity of fourth-century St. Nicholas of Myra (in present-day Turkey). We were warned that being less than good all year would bring us a lump of coal rather than the goodies — a jocular threat repeated as Christmas Eve loomed.

On the morning of Christmas Eve, my father would lock the door between our kitchen and living room, where we’d helped a few days earlier in decorating the tree. The lockdown heightened the mystery — and the anticipation of what might await under and around the tree.

Before the evening’s ripping into presents came the German-accented Dec. 24 dinner, cooked by Martha. Over the years, gift-opening creep advanced dinner time from 6 p.m. or so to as early as 4 p.m. Given enough more years, it might have become a morning feast.

After dishes were done, Kurt would unlock the door to the living room. Some years there would be something extra-special under the tree. My thrill at age 6 was an American Flyer electric train, with a puffing steam engine and a red baggage car that could snag a sack of mail as the train passed the depot.

When I was 11, my dad wasn’t able to fully conceal the big holiday gift. At Immanuel Lutheran School, I’d been one of the few fifth graders whose family still didn’t own a television set. I was a conversation dropout when it came to Howdy Doody or Hopalong Cassidy.  Coming home from an errand on the afternoon of Christmas Eve, I happened to look up. Sprouting from our roof was a TV antenna. I pretended I hadn’t seen it and feigned surprise when the gift-room door was opened. The first show we watched was a World War II documentary, Victory at Sea — in black and white, on a small screen built into a console approaching the size of a dresser.

Almost all of my boyhood gifts vanished long ago, as I head for my 78th birthday next June. But I still have one to cherish. It’s the battered jubilee edition of The Official Encyclopedia of Baseball, with its cover nearly falling off. Its enduring value is the signature on the flyleaf: “From Daddy & Mama with love, Christmas — 1951.”