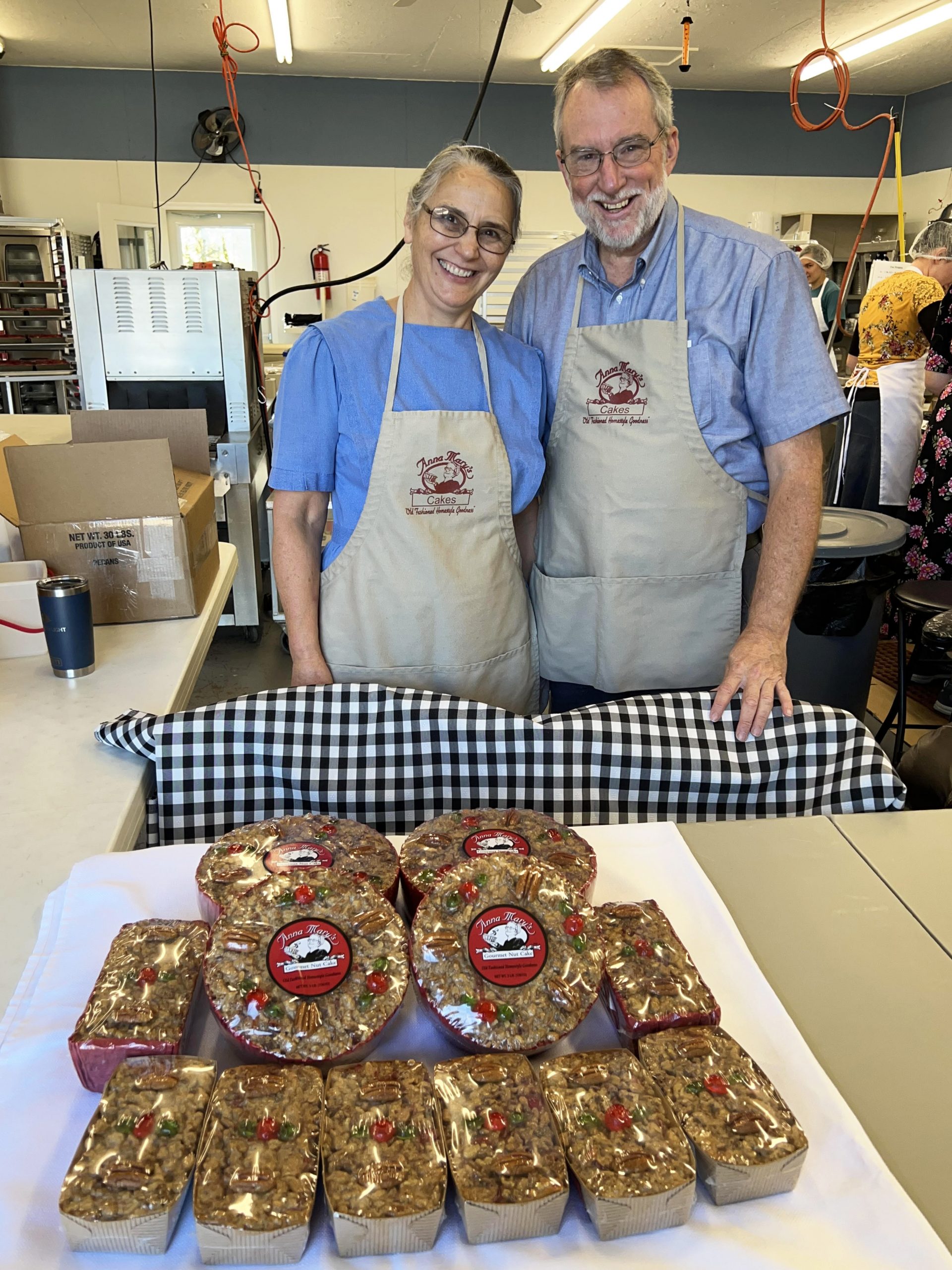 Barbara and Ken Kauffman have been baking and selling Anna Mary’s cakes for 31 years. Photo by Jennifer Christman Cia

Television host Johnny Carson famously quipped: “The worst gift is a fruitcake. There is only one fruitcake in the entire world, and people keep sending it to each other.”

But fruitcake cracks like Carson’s never fazed Barbara and Ken Kauffman, owners of Anna Mary’s bakery in mountainous Madison County. After all, the devout Mennonite couple doesn’t watch TV. And besides, they know their Gourmet Nut Cakes aren’t the average Christmas fruitcakes.

“We’ve been in this business now for 31 years,” Ken says. “Our customers would say, ‘Hey, this is not your regular fruitcake!’ Fruitcake has a bad rap. And so, we decided to call it something different. We started calling it a Gourmet Nut Cake, and then our slogan became, ‘We’d be NUTS to call this a fruitcake!’”

Together with their workers, the Kauffmans — Carroll Electric Cooperative members who live and work on a private road in rural Huntsville — bake the seasonal cakes from September to mid-November before shifting entirely to shipping. They use the treasured old-fashioned, nut-heavy recipe and the name and likeness of Barbara’s late mother, Anna Mary Byler. Hearty with walnuts, pecans, glazed cherries and chopped dates, the cakes — available in 1-pound and 28-ounce loaves and 3- and 5-pound rings — are meticulously mixed, baked, glazed, decorated and packed by hand in the serviceable, sign-free warehouse on the Kauffman’s property. 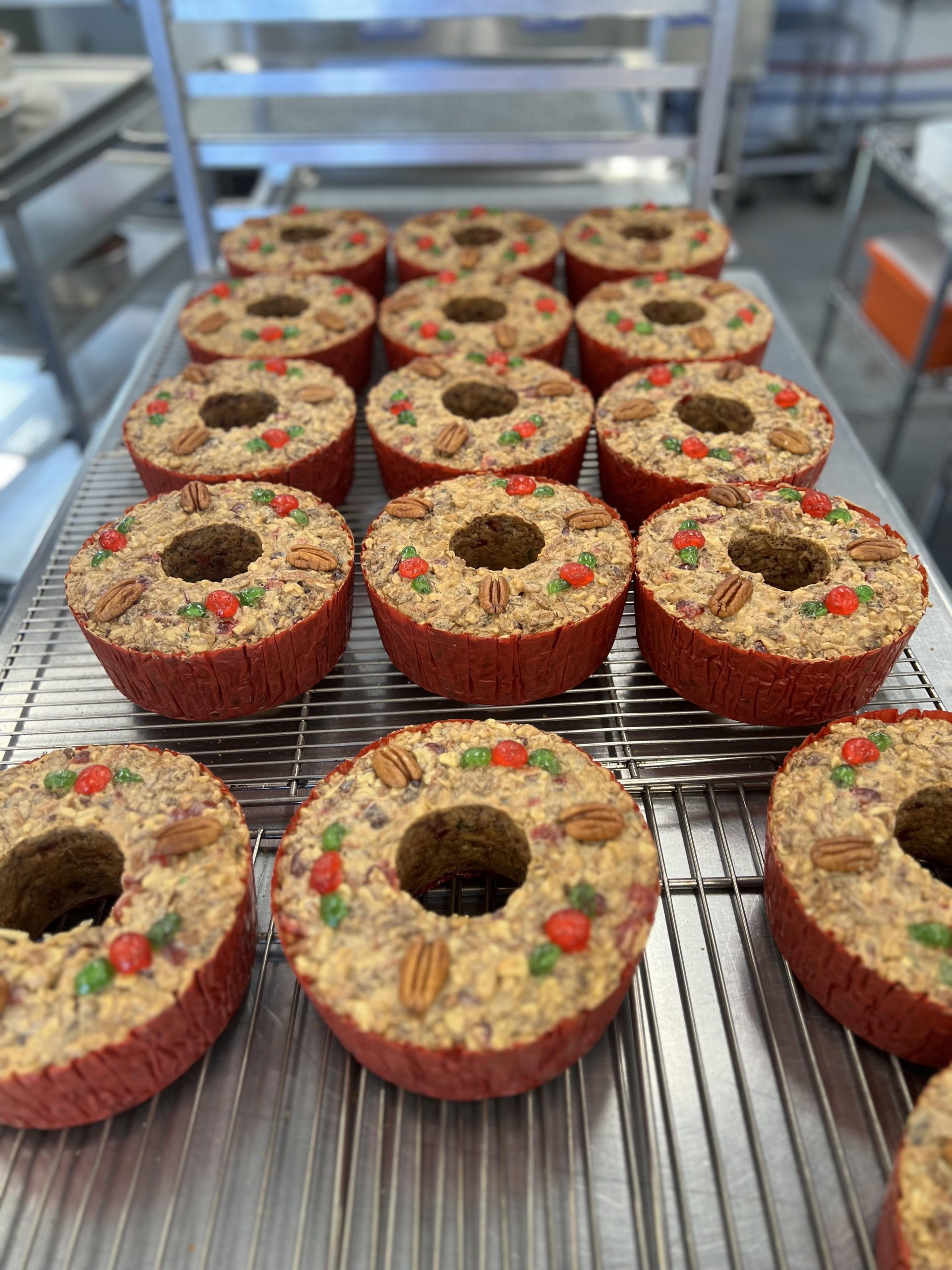 It’s because of the personal attention and pricey ingredients that Anna Mary’s cakes — sold at Harps Food Stores in Arkansas, Kansas, Missouri and Oklahoma; at various retail outlets around the country, including at Huntsville Pantry in Huntsville; and online at annamarys.com and amazon.com — are more expensive than common, mass-produced fruitcakes. Containing, as their website says, “Over 70% nuts and fruit with just enough batter to hold it together,” cakes range from $15.99 to $53.99.

As for how the Kauffmans started the fruitcake business, it began with a nutty idea. Literally.

Fruits of their labor

Anna Mary, Barb’s mother, was well-known for her hefty, festive fruitcakes given to friends and family and sold in the family hardware store in Virginia. When Anna Mary passed away in the fall of 1991, right before baking season, Barbara — one of 13 children — got the idea to sell them in her family’s small country store in Georgia. Ken thought they’d be too expensive for their customers.

A Christmas miracle happened: They sold so many — right down to the last one — that the Kauffmans didn’t even get to enjoy one that year. Business grew, and by 1997, according to the website, Anna Mary’s was recognized by the National Mail Order Association as one of the top 500 products in the USA.

After several moves, the family and business relocated to Arkansas. While only one of the Kauffman’s six children lives in Arkansas, all had a role in building the business.According to their website: “Our six children have (mostly) fond memories of long evenings at the bakery during the fall baking rush. They would often come to the bakery after school and stay until we went home for the day. When they weren’t building elaborate houses out of boxes in the storage/packaging area, they would be helping to label the cakes or assisting Daddy with packaging and boxing. It was truly a family venture.” 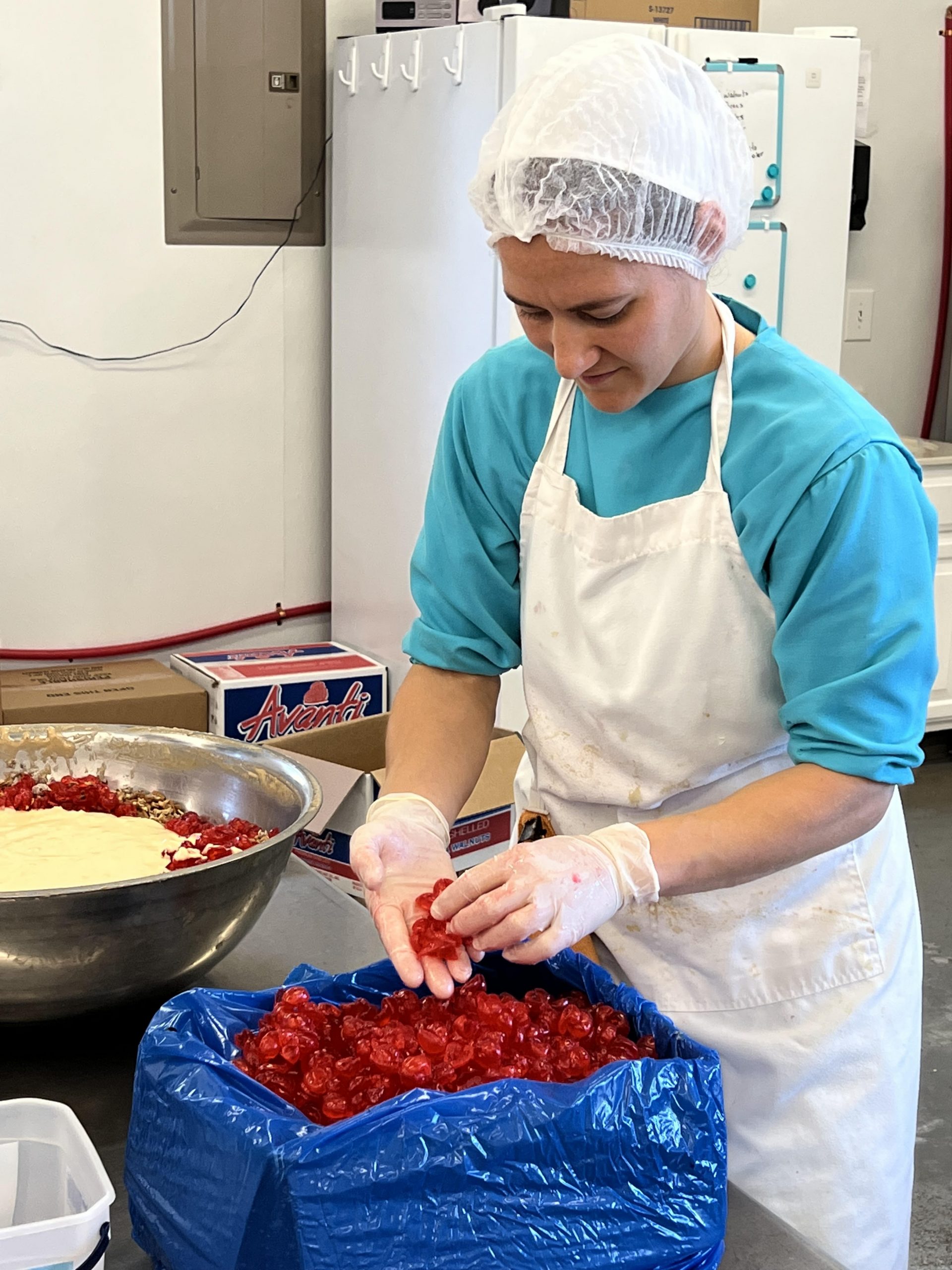 On this Tuesday in November, the team has a goal of producing 735 pounds of nut cakes. This season, Ken says, they’ll produce tons.

Out of those, how much will Ken eat? He says with a laugh: “It’s not uncommon for me to eat so many that I get sores on my tongue from all the nuts.” He adds that their fruitcake isn’t just for dessert: “It’s not uncommon to have a slice for breakfast.” After all, their nut cakes have more protein and less sugar than typical fruitcakes. They slice one, revealing the nut content and graciously offering the writer a sample with coffee. Barbara says, “It’s even better with coffee.”

Ken says, “The taste is unrivaled, really. We most often get compared to or contrasted with the fruitcake made in Corsicana, Texas,” referring to Collin Street Bakery. “Of course!” the writer exclaims. “The one featured in last year’s ‘Fruitcake Fraud’ documentary!” Oh, right, the Kauffmans don’t watch television.

But the Kauffmans do bake seasonal nut cakes (there’s even a Valentine version with chocolate chips). As for the rest of the year, the Kauffmans produce and sell green tomato relish (hot and regular), bread and butter pickles, “million dollar pickles,” pickled beets and candied jalapeño peppers. Their parent company is aptly named Homestyle Heritage. 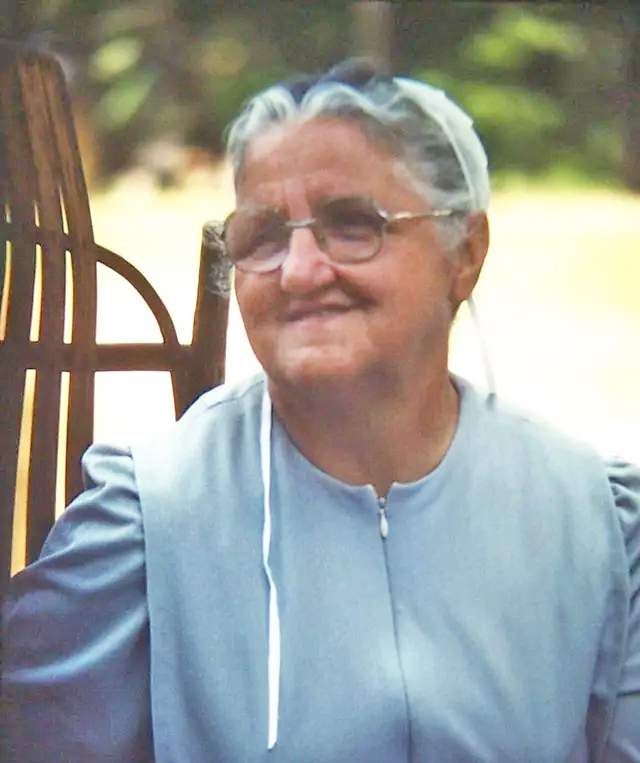 The bakery’s namesake, Anna Mary Byler, was well-known for her hefty, festive fruitcakes. Photo courtesy of the Kauffman family

Barbara says it’s a joy to carry on her mother’s legacy. Anna Mary isn’t only present in the business’ recipes and quality standards. Her photo sits prominently in the warehouse, right above a wipe-off board with notes for workers. Today it says: “Employee of the Week: You! Pat yourself on the back!”

“Mom loved to give,” Barbara says. “She loved to give to kids, to people, to neighbors. She was especially fond of the people in town who were underprivileged, who didn’t have families.” This when Anna Mary had 13 children of her own to care for.

As for what Anna Mary would think about the business the Kauffmans have built in her honor, Barbara says, “I think she’d be amazed.”

In other words, she’d be nuts about it.