My amiable mother, Martha, a friend to almost any creature great or small, did have an implacable enemy she 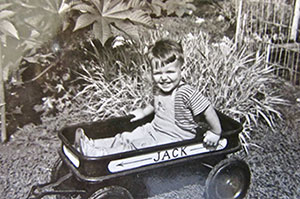 Jack Schnedler sits in a
monogrammed wagon in his paternal
grandparents’ verdant backyard in St. Charles, Missouri, circa 1947.

battled each summer as it laid siege to her backyard tomato plants.

An Arkansas native, she’d been born in 1913 as the fourth of seven children in a financially strapped farm family on the Grand Prairie near Stuttgart. The farm was lost to foreclosure in the late 1920s during the agricultural prelude to the Great Depression.

In 1941, by then a registered nurse, she married my bank-clerk father, Kurt, in St. Louis. They reared me and two younger siblings in St. Charles, 20 miles west of that Missouri metropolis.

Her perennial gardening foes were the relentless neighborhood squirrels. More aggravating than cute, those pesky rodents relished taking a nip or two out of the nascent tomatoes growing toward ripe-red maturity. A good Christian in every sense of that word, she  never swore aloud at the furry rodents. But she did radiate a righteous anger.

Mom’s hardscrabble upbringing on the Arkansas farm left her with memories of picking cotton in blistering heat until her fingers went numb and her back threatened to crack. She had happier recollections of the large vegetable garden planted each spring by her mother, Mary Spilker.

“We were poor, but we never knew it,” she once told me. “Thanks to our garden, we always had enough to eat. We canned enough vegetables and fruit to last all winter.”

I muse about that life, so remote from the one my wife, Marcia, and I have lived for 25 years in Little Rock, whenever I look at a weathered photograph taken in Stuttgart probably in 1945.

The four-generation image shows me sitting on my mother’s lap at right. Far left is my grandmother. In the middle is my great-grandmother, Katherine Kirchoff, during the last year of a long life. German remained her language of choice.

The Spilker farm’s garden included a watermelon patch. Mom remembered that when the melons ripened each summer, there was such a juicy abundance that the family ate only the succulent hearts. The rest was fed to the couple of hogs they kept.

In adult life as a wife and mother, she became an avid urban gardener. Her crops included those battlefield tomatoes along with rhubarb, red and white radishes, leaf lettuce, scallions, carrots and other wholesome fare.

Some of the tomatoes that survived the squirrels would be canned for winter use, while excess rhubarb was frozen for later consumption — and too bad if you didn’t fancy a January dessert of rhubarb cobbler.

Grandma Ida and my Grandfather Edward lived two blocks from us in St. Charles. Their big backyard had a small oval fish pond stocked with koi that we grandkids would feed breadcrumbs. Grandpa grew more flowers than vegetables, with favorites including snapdragons and sweet peas. There were also tomato plants, targeted by the ubiquitous squirrels.

Along with her avid gardening, my mother hearkened back to her Arkansas childhood one year when I was maybe 4. She decided to buy 50 little yellow chicks and raise them in a shed at the far end of our backyard. Her idea was that they’d soon keep us stocked with fresh eggs.

The chickens turned out to be desultory layers. That sealed their doom, once my mother decided that they’d better serve our nutritional needs in a frying pan. Once a week or so, a hen would face the chopping block. And I had a hand in its path to the skillet.

By then a first-grader, I learned how to pluck a fowl before singeing off its pinfeathers over a flame on our gas stove. You’ll have to take my word that I didn’t chicken out, because no photograph survives of my precocious plucking skills.

Jack Schnedler is a Little Rock-based writer specializing in travel … and chicken plucking.