What a catch: Arkansas trout varieties include rainbow (pictured), brown, cutthroat and brook. Courtesy of Arkansas Department of Parks and Tourism

If fishing is your game, Arkansas is your place.
No matter where you go in The Natural State, you’ll find an amazing variety of species in diverse settings. From the crystal-clear lakes of Northwest and north- central Arkansas to the muddy, cypress-studded water in the state’s southern reaches, Arkansas holds something special for every angler’s taste and experience level.

“Arkansas ranks, in my opinion, very high compared to all states,” says Aaron Jolliff, a lifetime fishing enthusiast and owner of Hook, Line & Sinker fishing outfitters in Rogers and Bentonville. “If you want a place to live that is beautiful, has lots of water, access to different lakes and rivers, and all within a reasonable distance, I think it’s one of the best places in the country.”

Jolliff should know, considering the Tennessee native has fished all over the United States and Canada, and makes his living helping other anglers have a great day on the water. And although other parts of the state generally get mentioned before Northwest Arkansas, that’s a picture that’s changing rapidly.

“I think [Northwest Arkansas] is one of the best places to fish,” he says. “You can go into some of these little rivers and streams around here, the Elk River, Indian Creek, King’s River at the edge of Missouri. You’ve got all these wonderful streams that you can kayak and canoe that are loaded with fish.”

Jolliff says Arkansas provides so many fishing opportunities, it opens the activity up to everyone — regardless of budget or background.

“To me, fishing’s the greatest sport on the planet for many reasons,” he says. “My call-out to those people who’ve never fished: Just go out and enjoy it at any level. Fishing can be intimidating because today a lot of people see $50,000 to $70,000 bass boats and all this fancy equipment, and they think it’s required to go fishing. That’s absolutely false, man.,Gaston’s

“I mean, you can fish with a stick. You can fish as inexpensive as you want, from a cane pole and digging worms out of your yard to $80,000 boats and high-dollar equipment. You can fish from the shore, from a boat, it doesn’t matter.” 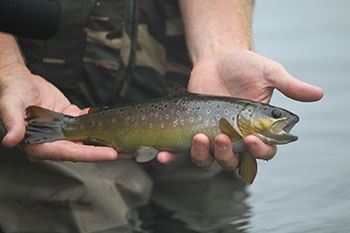 Arkansas features a wide variety of fish species and fishing locations. There are several species of bass, trout and catfish, plus walleye, bream, bluegill, crappie and others. And Arkansas anglers have their choice of rivers, lakes, streams and ponds. They can fish from banks, from piers and from every kind of boat imaginable, from kayaks to assorted motorized fishing boats.

The state’s economy benefits directly from this natural resource via fishing license sales, tourist expenditures and fishing gear sales. The sport also supports a number of resident industries such as fishing lodges, guide services, boat manufacturers such as Ranger and Vexus in Flippin and Xpress in Hot Springs, and lure maker Pradco of Fort Smith, to name a few.

Gaston’s White River Resort, a landmark nestled along the White River near Bull Shoals, is one long-standing entity that provides visitors with access to quality fishing.

“For outdoor life in general, Arkansas is a premier location,” says Clint Gaston, president. “Now, my part of Arkansas is even better; I would say we’re arguably one of the best trout fishing destinations in the country. We can fish year-around. We can go after big browns. We can go
after big rainbows.” 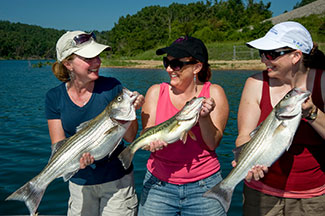 It’s not just fishermen that are hooked; plenty of fisherwomen appreciate the sport too. Courtesy of Arkansas Game and Fish Commission

Gaston, who represents the fourth generation of family ownership, has lived here most of his life, and while much remains unchanged, new trends have come to these waters. For one thing, he’s seen an increase in the number of women anglers.

“That’s grown significantly, even within the last decade,” he says. “What we get a lot of is families coming up, and the wives or the mothers will go out with their husbands or the rest of the family. They end up having more fun than everybody else since they usually end up catching more fish than everybody else.”

Gaston says while many newcomers enjoy casting for trout with a spinning rod and reel, there are just as many 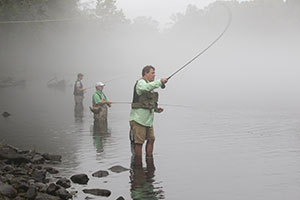 Fly-fishing in Arkansas has become a “reel” attraction.

with a desire to learn fly-fishing. His lodge offers courses in the sport, as do many other guide services devoted exclusively to this artful pastime.

Greg Seaton, owner of Little Red Fly Fishing Guide Service, has been teaching and leading fly-fishing enthusiasts full time on the Little Red River since the early 2000s. Even so, he says many people don’t realize the national reputation Arkansas has as a fly-fishing destination.

“Arkansas is well-known across the country as a fly-fishing state now,” he says. “The White River and Norfork and the Little Red have brought it to the top. In fact, the Little Red and White rivers are considered premier trout streams in the United States.

“I had a fishing guide from Colorado come here; he’d had so many people come to Colorado talking about the Little Red that he wanted to try it. In two days, he caught over 100 fish a day. He told me after the second day, ‘Don’t come to Colorado and ask me to guide you on my river, because eight to 10 fish a day is a good day.’” 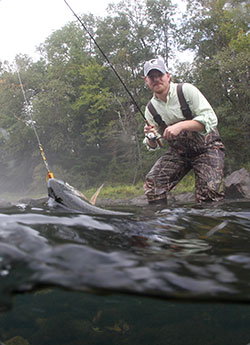 An angler catches a trout on the Little Red River. Courtesy of Arkansas Game and Fish Commission

The Little Red yields rainbow and brown trout and the occasional brook trout, while the Norfork and White rivers also contain the cutthroat variety.

Seaton credits ongoing sound management and conservation efforts for the high quality of area fishing.“We’ve worked … to make sure that our supply of water is constant during the summer so that we get that cold water,” he says. “The generation has provided constant temperatures of 50 degrees here. Every time they release water at Bull Shoals Dam, it’s going to be 50 degrees because it’s out of 147-foot deep waters. It provides that cold water, even during the summer.”

All about that bass 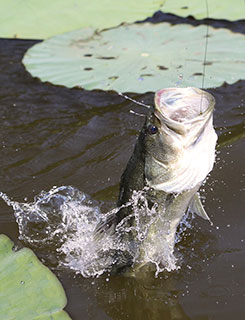 Bass are one of the many types of fish biting in Arkansas. Courtesy of Arkansas Game and Fish Commission

Lynda Gessner is a professional angler with Mr. Bass of Arkansas and Lady Bass Angler Association who recently relocated to Hot Springs from Missouri. She says one of Arkansas’ primary advantages over other states’ fishing is access.

A fishing hole in every community

“Originally, I lived in St. Louis, and it took me at least three hours to get to any kind of lake, excluding Mark Twain 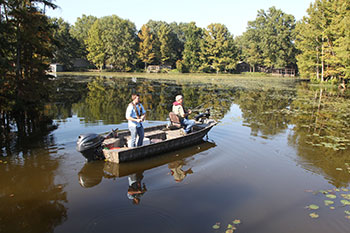 Arkansas fishing enthusiasts have their choice of rivers, lakes, streams, ponds and creeks, like Palarm Creek, which connects to Lake Conway. Courtesy of Arkansas Game and Fish Commission

“Here in Hot Springs, I’m five minutes from Lake Hamilton, and 15 minutes away from Lake Ouachita, which is a wonderful fishery. Then 30 minutes away, you’ll be on Lake DeGray, and I’ve got at least four or five lakes within two hours of here. I can go to Millwood Lake, I can go to Lake Dardanelle, I can go to Greers Ferry. That’s what’s nice about Arkansas. You’re within an hour or two of seven to 15 lakes. And they all fish different, and normally the weather is nice.”

In fact, Gessner says, Arkansas enjoys such a wide buffet of fishing options that diamonds in the rough abound, providing an excellent day’s catch even for the relatively inexperienced.

She says, “Right now, one lake that I’ve been impressed with for the amount of fish and the ease of fishing is Lake Greeson,” on the Little Missouri River, north of Murfreesboro. “I went a month ago and found it to be a beautiful lake and the fish bit very well. … But right now, you can go to the back of any cove of any of these lakes around here, throw a worm in with a bobber and probably get a nice catch.

Fishing allows you to slow down, unplug and connect to the environment and others.

Just going on fish count misses the point, Clint Gaston says: “Be patient. Some days, you’re going to get out there and you’re going to catch from your first cast to your very last cast. On a grand slam day, you can get the expectation that’s what it’s supposed to be like every time. That’s certainly not the case; you’ll have good days and bad days. Don’t give up, though, it will turn around next time.

“Besides, a bad day fishing is still better than about anywhere else.”

Dwain Hebda is a freelance writer in Little Rock.