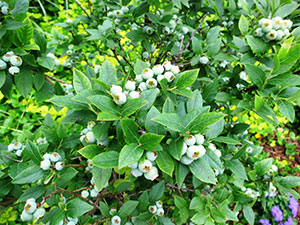 Blueberries produce better when another variety to cross-pollinate is nearby.

Who doesn’t love a good blackberry cobbler or blueberry pie? These tasty fruits are in season now and can easily be grown in the home garden.

When home gardeners think about growing fruit crops in their yard, they typically think peaches, which are one of the toughest fruits for a home gardener to grow successfully without a spray program for diseases and insects. Thankfully, there are a number of fruit crops which are a tad more forgiving, and blackberries and blueberries head that list.

Arkansas is blessed to have a large fruit breeding program at the University of Arkansas. The university has set the standard for blackberry production worldwide, and it is a key player in grape and blueberry varieties. Right now, we are in the blueberry and blackberry season, with an abundance of tasty fruit.

There are many varieties of blueberries available. Most blueberries need another variety to cross-pollinate with to ensure fruit set. If you have a new self-fruitful variety, it will still produce better if there is another variety nearby. The three types of blueberries on the market are Highbush, which grows in the northern half of Arkansas, Rabbiteye for the southern half, and the Southern Highbush, which does well in central and southern Arkansas. Blueberries need a well-amended, well-drained acidic soil. They are not drought-tolerant — remember, they are related to azaleas. Mulching and an irrigation system are a must. Blueberries are easy to incorporate into a garden or landscape as an edible ornamental, since they have showy white flowers in the spring, pretty, edible blue fruit in the summer and outstanding red fall foliage. There are even container-sized plants available so you can enjoy them on your deck or patio.

Blueberry bushes produce a multi-stemmed bush with the mature height varying from 3 feet to 6 feet based on variety. Best production is usually on 3- to 4-year-old canes, but you want an even number of 1-, 2-, 3- and 4-year-old canes for a long-producing plant. As canes get much older than 4 years, they tend to be woodier and less productive. Pruning of blueberries is done in the winter months when they are dormant. The biggest pest problem is birds; they love the fruit as much as you do. For a small home planting, bird netting is the best method for protection.

Blackberries are native to Arkansas, and many of us remember picking wild blackberries in the summer. We’d come home with scratched arms from the thorns and a nice case of chiggers, but some delicious fruit! Today’s blackberries put those wild ones to shame. Arkansas has long been the leading breeder of blackberry varieties and there is an impressive array to choose from. All of the blackberry cultivars developed by the University of Arkansas have been named after American Indian tribes. My favorites are the thornless varieties including Apache, Arapaho, Natchez, Navaho, Osage and Ouachita.

Give blackberries a spot in the garden where they can grow and expand, but be prepared to contain them as they begin to spread. The thornless Arkansas blackberry introductions are considered erect plants versus trailing types, but the first year or two, they would benefit from a little support to keep the vines off the ground.

By choosing your plants wisely, you can start producing in late May and still be picking fruit in late July. Blackberries produce their fruit on the canes that grew last year. After you have finished harvesting, prune those fruiting canes out, making room for the canes which will fruit next year.

Pick your blackberries when the fruit is fully ripe. Typically they lose that glossy sheen and turn a little dull when they are ripe. Picking fruit early in the day after the dew has dried is when the fruit is at its peak. If you are like me, some make it into the basket, and others are directly eaten!

If you are interested in producing some small fruits along with the vegetables and flowers in your garden, there are many resources for you to use on the University of Arkansas System Extension website at uaex.edu.