The Razorback Greenway can be enjoyed year-round, with spring and fall providing prime weather for outings. photo Arkansas Department Parks Heritage and Tourism

When Erin Rushing returned to Fayetteville in 2000, he had been away from the home of his alma mater, the University of Arkansas, for five years. His landscape architect career had been established in Kansas City, Missouri, and he was ready to go back home.

While he was excited about returning home to continue his career, something was missing. He had become an avid cyclist, traversing the greenways in Kansas City, and he was somewhat surprised to learn that Fayetteville and the surrounding area had missed out on the cycling boom of other college towns.

“At that point, I kind of made it my mission,” Rushing says, adding that he soon found like-minded trail proponents and joined their ranks by designing some of the early greenway projects in the city of Bentonville, which had received grants for trail construction.

He would go on to help design more of the greenway, which stretches about 38 miles from south Fayetteville to Bella Vista. It is a project that is the result of many organizations and local leaders working together to build a trail system that rivals those of much bigger cities while bringing millions of dollars to the economy through tourism and new development.

Build it, and they will come 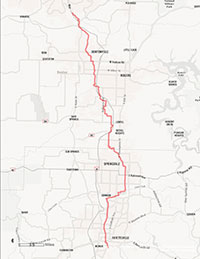 The Razorback Greenway extends for 37.5 miles and connects cities along the way.

“It (greenway) has been an overwhelming success,” says Tim Conklin, assistant director for the Northwest Arkansas Regional Planning Commission (NWARPC).

The NWARPC began discussions for a regional greenway project in the mid 2000s, Conklin says. A task force formed by the NWARPC conducted public meetings and facilitated a coordinated effort among the communities of Northwest Arkansas.

Paved trails that became part of the Razorback Greenway were first developed in Bentonville and Fayetteville in the early 2000s. A big boost to the development occurred in 2009 when the Walton Family Foundation, a longtime supporter of trail construction in Northwest Arkansas, provided matching funds for the project. By 2010, a route for the greenway trail was designed with input from a series of community workshops to connect six cities — Fayetteville, Johnson, Springdale, Lowell, Rogers and Bentonville. Also in 2010, the NWARPC received a federal transportation grant to help fund design, acquisition of rights of way and construction of the Razorback Regional Greenway.

On May 2, 2015, the dream became a reality as the then 36-mile multi-use bicycling and pedestrian Razorback Regional Greenway officially opened. Since then, the numbers of cyclists and pedestrians using the trail has continued to grow. And recently, more trail was added on the north end extending into Bella Vista, making the greenway 37.5 miles long. More additions are planned, Conklin says, and Bella Vista will be the seventh city connected by the greenway. 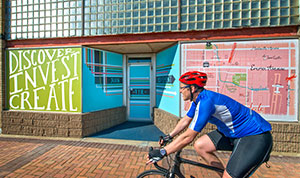 The Razorback Greenway takes cyclists and pedestrians through six cities in Benton and Washington counties. photo Arkansas Department of Parks Heritage and Tourism

regional plan, Conklin says. To help facilitate the management of the greenway in a consistent manner, a new organization, the Razorback Greenway Alliance consisting of representatives from the greenway cities was formed this summer and “is involved in joint, cooperative undertakings associated with the operation and management of the NWA Razorback Greenway,’’ according to the NWARPC website. 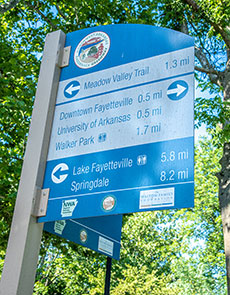 “If you are a mountain biker, and you want to get to next trail system without getting into your car, you can ride down the greenway, eat some lunch at a restaurant, and then go out and ride the soft-surface trails and then ride back to your car along the greenway,” Rushing says, adding that many people use the greenway to commute to work.

The culture of cycling

One of the thousands of trail-users who regularly rides his bike to commute to work is Steve Meldrum, sales director for Proctor & Gamble’s Fayetteville office. An early adopter of the trails, Meldrum has been riding the greenway for 12 years. He has noticed a major uptick in trail usage in that time.

“Yes, they are definitely being utilized,” he says. “I love the winter, because nobody is on ‘my trail.’”

He often rides with his daughter, Annie, 15, and his son, Blake, 24. Having the greenway and the culture of cycling in the area is helping his children build a healthy lifestyle, he says. “It’s a lifetime deal; you can do it the whole way to the end.”

The Razorback Greenway can be enjoyed year-round, with spring and fall providing prime weather for outings. photo Arkansas Department of Parks Heritage and Tourism

Another ardent supporter of the trails is Katherine Hudson, a Northwest Arkansas Realtor and member of the Johnson City Council. She lives near the Lake Fayetteville trails section and regularly walks the route. She notes that it is common for clients to ask about the trails when looking for property to buy.

“Often when I am working with a buyer, they tell me that they want close access to the trails,” she says. “It really is a quality of life issue. And it’s single people, older people, married people. I am amazed at the number of retirees who ask me about the trails; it is not just millennials.” 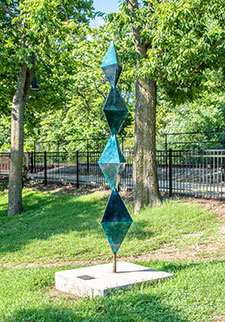 Sculpture, murals and other types of art add to the landscape and the views along the greenway. photo Mike Price

and the connecting trails. Collectively, they are referred to as the Northwest Arkansas trail system. In August, the foundation issued a report on its latest study that shows, since 2015, there has been a 36% growth in cycling and a 13% growth in pedestrian traffic along the system, with the greatest growth on the Razorback Regional Greenway.

The Northwest Arkansas trail system now has 484 miles of trails, including 322 miles of natural-surface trails and 162 miles of multiuse paved paths, the report said.

“The foundation, municipalities, nonprofits and other organizations have worked together to grow the region’s network, increasing the number of miles by nearly 32% in the last two years alone,” the report says. 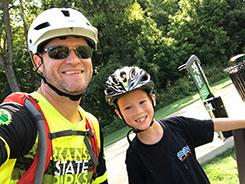 Erin Rushing, executive director of the NWA Trailblazers, with his son, Tatum, prepare to take a spin on the Razorback Greenway. photo courtesy of Erin Rushing

Rushing, executive director of the NWA Trailblazers, a nonprofit organization that develops trails for the region, says traffic counters have been installed along the trail and show significant increases in traffic along the trails since the COVID-19 pandemic took hold earlier this year.

“It has changed everything,” Rushing says, adding that one counter at Lake Bella Vista showed 38,000 people had used the trail during May. A year ago, the counter showed 18,000.

“So, over double that; a 105% increase,” Rushing says. “People wanted to get outside. They had been trapped up for a couple of months and the weather was nice.”

Although it is clear that the pandemic has helped the numbers grow, Rushing notes that there were steady increases in the trails’ usage before COVID-19.

The foundation’s report says that the Northwest Arkansas trails have had a “sharp uptick” in use during the pandemic. In addition to the trails in the Bella Vista area, the report says some Bentonville multiuse trails had a 76% increase in daily use, while the greenway at North Street in Fayetteville had 41,000 cyclists and pedestrians use the trail in the month of June, the highest number since it opened in 2008.

What you will see

The natural beauty of Northwest Arkansas is one of its main draws for both residents and tourists. The greenway and its connecting trails showcase that beauty, as well as the various amenities along the route. It is the best of the natural world and the cities/communities.

As the greenway winds through the six cities it connects, there are brew pubs, restaurants, parks, lakes and 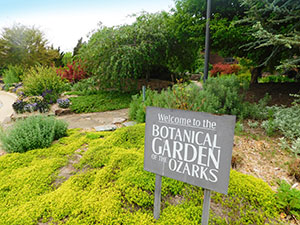 Located on the Lake Fayetteville Trail that connects to the Razorback Greenway, the Botanical Garden of the Ozarks draws more than 80,000 visitors a year to view its 12 themed gardens and native butterfly house. photo Sheila Yount

nearby shops, including places to buy bicycles and gear.  Art, including murals and sculpture, and a botanical garden add to the views. And even though it isn’t actually on the greenway (it is less than a mile away), visitors to the area will want to consider a side trip to the world-class Crystal Bridges Museum of American Art near the Bentonville Square.

There are litter stations and hydration stations (check availability during the pandemic) located along the routes to keep the area clean and to quench the thirst of trail-users. As part of the extensive planning for the trail system, hydration was a top priority. Since 2004, Beaver Water District has played a role in meeting this need by partnering with cities to install hydration stations along the trail, said Amy Wilson, public affairs director for the district.

Before you head to the area to hit the trails, view the 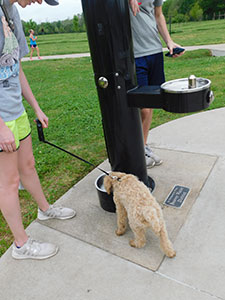 Dogs are welcome along the greenway and even have their own drinking fountains. photo Sheila Yount

The Fayetteville Flyer at fayettevilleflyer.com, an online news site and another good area trails source, suggests downloading the MapMyRide and/or Strava apps to help navigate the trails.

The work on the greenway and connecting trails did not end with the greenway dedication in 2015. It was really just a beginning, Rushing said. The NWA Trailblazers, with continuing support of members of the trail alliance and the Walton Family Foundation, continue to develop new trails, as well as maintain and upgrade existing sections with increasing safety as a top goal.

“There’s still stuff that we do, every day, all of the time,” Rushing says. “We’re always looking at how we can make the Razorback Greenway better.”

Conklin agrees that more remains to be done.

“The greenway is not complete,” he says, adding that plans to extend to 40 miles are underway, and it will not end there as public support keeps growing.

“It has been transformative to Northwest Arkansas to connect all of the cities from Bentonville to Fayetteville,” Conklin says. “We are so fortunate to have these trail systems.”

For more information on the Razorback Greenway and the Northwest Arkansas Trails system, visit: nwarpc.org/razorback-regional-greenway/ and nwatrails.org.