Any state worth its salt has a haunted spot or two, and Arkansas is no different. Anywhere you go in 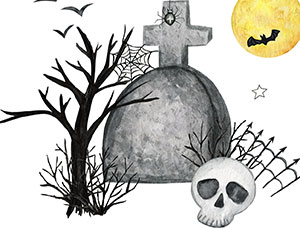 The Natural State, you’ll find local folklore with tales of ghostly apparitions and unexplained phenomenon. It’s all good fun, if a little macabre, to hear the backstories of these otherworldly attractions.

Here are a few of the most interesting haunted spots in Arkansas, just in time for Halloween.

As with all businesses and public attractions, COVID-19 may have altered accessibility, events and hours of operation. Remember to call ahead before planning a visit.

Crescent Hotel in Eureka Springs is one of Arkansas’ most famous haunted spots. – Arkansas Department of Parks, Heritage and Tourism

Whenever the subject of the Arkansas paranormal comes up, the Crescent Hotel in Eureka Springs always makes the list. The 72-room resort hotel has a reputation for being arguably the most haunted spot in all of Arkansas.

Perched high above the rest of the city and surrounded by Ozark Mountain forests, the hotel was completed in 1886 at a cost of nearly $300,000 — astonishing for the time — and billed itself as the most opulent in America. It catered to wealthy guests partaking locally of what was advertised as healing waters.

It didn’t take long to discover there was nothing restorative about the water, and guests dried up. The Crescent went through many phases, from a women’s college to a particularly eerie chapter as a cancer hospital, operated by a scam artist promising miraculous cures that proved to be outright quackery. A string of speculators never succeeded in bringing the Crescent back to its glory, and at times, the big structure merely sat empty, adding to its haunted lore. In 1997, the Crescent began a 10-year process to restore the hotel to what it is today, a thriving attraction.

But where some luxury properties might want to distance themselves from the ghosts of their past, the Crescent welcomes them with open arms. Ghost tours include viewing the former morgue and autopsy room of its cancer hospital days; special events scare up a good time; and the hotel website is full of photos purported to show specters of all shapes and sizes.

If you go, look for Michael, the hotel’s most popular haunt. A stonecutter who helped build the hotel, he fell to his death at the location of Room 218. Dr. John Freemont Ellis, former hotel physician, is another ghostly guest. Dressed in top hat and fine clothing, he has reportedly been seen on the staircase from the second floor to the lobby, and smoke from his pipe is sometimes smelled near the elevator.

This beautiful, historic home from the 1840s antebellum period has been home to the Little Rock Visitors Information Center since 2002. But it’s the visitors you can’t see who give the structure its supernatural reputation.

Col. Ebenezer Walters built Curran Hall in 1842 as a wedding gift for his bride, Mary Eliza Starbuck. The young woman never saw the home completed, as she died in childbirth just before it was finished. Not able to bear living there in the aftermath of this tragedy, Col. Walters left the state, and the house changed ownership several times.

Through the years, the house’s inhabitants reported the presence of Mary Walters. Even today’s visitor center staff tell of nerve-jangling events, including a picture falling off the wall and a coffee maker brewing coffee with no grounds or water present. Spookiest of all, a team of experts reportedly captured a voice recording saying, “Mary. That’s who I am.”

But even if you don’t come face-to-face with the departed, the beautiful gardens in season and historic architecture are worth the visit.

There are a lot of supposedly haunted spots in Fort Smith and vicinity. Being home to a national 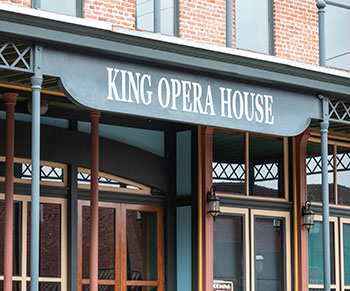 King Opera House of Van Buren has its own phantom of the opera. – Arkansas Department of Parks, Heritage and Tourism-

cemetery, an old frontier fort and the federal court of one “Hanging Judge” Isaac Parker will do that to a locale. But head and shoulders above even these attractions is the King Opera House, right next door in Van Buren.

As with all good ghost stories, the opera house’s version begins with a tragic death. Built in the 1880s, the Victorian-style structure was a popular performance hall for traveling troupes. One such theater company included a young actor who, as the story goes, fell in love with a local girl in between performances there. The girl’s father, a local doctor, didn’t approve, so the couple conspired to run away together by hopping a train. The father intercepted them at the Van Buren Train Depot and beat the young actor to death with a horse whip.

Today, the young man’s ghost is said to haunt the theater. Several former employees say when they were alone in the hall, they often felt an eerie presence with them.
Some go so far as to say they’ve seen the opera’s phantom, dressed in a top hat and Victorian-style coat with a long cape, still pining for his lost love.

But don’t take our word for it. When it reopens (it has been closed due to the pandemic), tour the recently restored opera house or take in a performance. You can even rent the whole thing for an event — if you dare.

We’ve saved the most puzzling attraction for last. The Gurdon Light, a ball of light that can be seen hovering above the railroad tracks, is unique in that, unlike the other mysteries on this list, there is no denying its existence. It’s there; you can see it, just as generations of other thrill-seekers have. In fact, NBC’s Unsolved Mysteries documented the nighttime phenomenon for television in 1994. What’s still unknown after all this time is what the light is and why it exists.

Conventional explanations for the bright light — sometimes described as white-blue, sometimes orange and moving — include car lights from the highway or swamp gas reflecting through the trees. Both have been debunked, however, as sightings predate the highway, and swamp gas would only apply in certain seasons. The Gurdon Light has been reported year-round.

A juicier explanation lies in the tale of William McClain and Louis McBride. McClain, a Missouri-Pacific railroad foreman, fired McBride in 1931 during an argument; McBride then killed his boss. Details of motive are fleeting — some say McClain discovered McBride sabotaged some track and caused a derailment, and some say McClain didn’t grant McBride the work hours he wanted.

Whatever the actual reason, McBride confessed to the deadly deed of beating McClain to death with a shovel and a railroad spike maul and was put to death by electrocution, July 8, 1932. The Gurdon Light was first documented shortly thereafter, thought by many to be McClain’s ghost, carrying his railroad lantern to work.

A less-documented but just as colorful alternate theory: An unnamed railroad worker who, in a work accident, fell under the wheels of a train was decapitated. Investigators never found the man’s head, and the light, adherents say, is his ghost returning with a lantern to look for it.

Getting there is something of a hike after you land in Gurdon. Just ask at any gas station in town, and someone will direct you. The Light is best seen on dark and cloudy nights, which complicates the jaunt. There’s even an old cemetery nearby, which adds to the creepy ambiance. Gurdon Light, 64 Collins Road, Gurdon