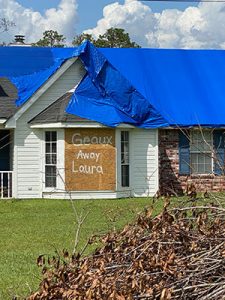 devastation he and his fellow crew members encountered in southern Louisiana in the aftermath of Hurricane Laura was like a “war scene.”

“Everything’s destroyed, houses have exploded,” Matty said in an interview in late September while working for Beauregard Electric Cooperative in DeRidder, Louisiana. Adding to the misery, he said, was the heat and humidity and stench from rotting food that residents had thrown out of their homes during the cleanup.

Matty was among 161 lineworkers from AECI and mutual aid crews from Arkansas’ electric distribution co-ops who headed to Louisiana after Hurricane Laura made landfall on Aug. 27 near Cameron, Louisiana, as a Category 3 storm. Arkansas’ electric co-ops worked to repair power outages from the remnants of Hurricane Laura, which swept across southern Arkansas, before traveling to Louisiana to help electric co-ops that sustained devastating damage. 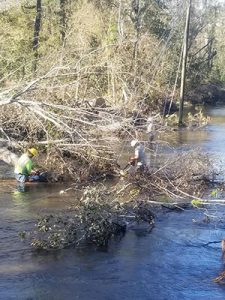 Cooperative and then moved south to Louisiana where they assisted Claiborne Electric Co-op. From there, they went to Beauregard Electric.

When they arrived, Beauregard Electric, which serves about 43,000 members, had only one meter in operation.
A “tent city” had been erected for the crews, which included about 1,200 men, Matty said, adding that the days started early and ended late.

Although the work was hard and conditions difficult, Matty said helping the people whose homes and businesses were affected was rewarding. “I love helping people, but I hate seeing the destruction,” Matty said, adding that the co-op members appreciated their help.

“I stopped at a gas station one morning and a woman came up to me and said, ‘Are y’all with the power company?’ And I said, ‘Yes ma’am.’ And she said, ‘Thank you so much’ and came up and hugged me.”

In addition to lineworkers, AECI, the statewide service cooperative for Arkansas’ 17 electric 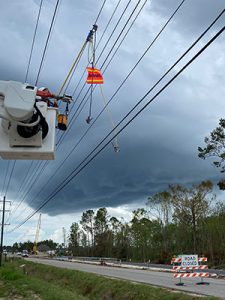 distribution cooperatives, shipped a substantial amount of power line infrastructure materials to co-op and municipal electric systems that were impacted by Hurricane Laura. After 36 days, the Arkansas crews were released in early October.

Only six weeks after Hurricane Laura swept across Louisiana and beyond, Hurricane Delta dealt a second devastating blow to southern Lousiana. And again, Arkansas’ electric co-ops came to Beauregard Electric Cooperative’s aid.
As with Laura, Hurricane Delta caused significant damage to the co-op’s infrastructure, leaving all 43,000 meters without power. It was only the third time in its 80-year history that its entire system was down. The first time was Hurricane Rita in 2005.

Although the damage to the co-op’s distribution system was significant, it was not as bad as Hurricane Laura.

Rob Roedel contributed to this report.