Author Ernest Hemingway once remarked that the two prettiest places on Earth in the fall were Paris, France, and Piggott, Arkansas. Many people are not aware of the legendary writer’s love of the small town near the Missouri border, but it played a major role in his charmed life.

While Ernest Hemingway is the main draw to the Hemingway-Pfeiffer Museum and Educational Center, the Pfeiffer family also has a rich and colorful history. photo by Kody Ford

During his time in Paris, Hemingway met his future wife, Pauline Pfeiffer, a writer and editor for Vogue magazine, while still married to his first wife, Hadley. They were friends at first, but became romantically involved during (or possibly prior to) his messy divorce. Her father, Paul Pfeiffer, had made a fortune in pharmaceuticals in St. Louis along with his brother, Gus.

Eventually, Paul grew tired of that life and purchased 63,000 acres in Piggott to raise cotton. 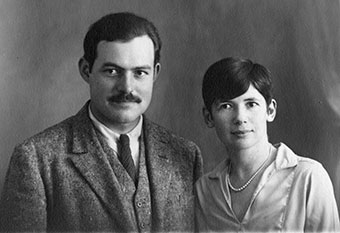 After Hemingway and Pauline married, they would visit Piggott to stay with her parents, Paul and Mary. Since railway travel was the primary means of transportation, they often stayed for months at a time. According to Adam Long, director of the Hemingway-Pfeiffer Museum and Educational Center, Hemingway often wrote in the barn or the breezeway beneath it and occasionally opted for the front porch of the house. Often, he would invite locals over to play cards and drink in the barn.

Over the years, he wrote many short stories there, the most famous being “A Clean, Well-Lighted Place.” The story “A Day’s Wait” is set in Piggott, though Long is not sure if it was written there.

The most famous work that he crafted in Arkansas is the acclaimed novel A Farewell to Arms, a love story about an ambulance driver and nurse on the Italian front during World War I. The film version of the novel starred Gary Cooper and Helen Hayes. The author, however, was not a fan of the adaptation; he disavowed it before production finished. In an attempt to win Hemingway over, the studio held a world premiere at the Franklin Theatre in Piggott when he was visiting. This was the first high-profile film premiere in the town. Unfortunately, he refused to attend.

Eventually, Hemingway and his wife divorced, and he did not return to Piggott. The Pfeiffers remained, but during the Great Depression Paul spent much of his fortune trying to help keep Piggott afloat. By the time he passed away in 1944, their wealth had greatly diminished.

Over the years, the home changed owners. In 1997, Dr. Ruth Hawkins and Arkansas State University (ASU) were working to help establish the Crowley’s Ridge Parkway. Piggott was the northernmost town on the proposed route, and Hawkins was aware that Hemingway had visited there. She sent a photographer to get a look at the property, which happened to be on the market. The school worked to gather donors, including Sherland and Barbara Hamilton of Rector and the Janes family of Piggott. With their support, ASU acquired the property in 1997 and opened it to the public in 1999.

The home has been refurbished to look much like it did during the 1930s. It features numerous mementos of the Hemingways and the Pfeiffers. Long said they receive about 5,000 visitors a year from 35 to 40 states and six to eight countries. Aside from being open to tours, the Hemingway-Pfeiffer House has week-long writers’ retreats twice annually.

Long said that the home’s storied past makes it worth visiting.

“The Hemingway-Pfeiffer Museum preserves an important part of Arkansas history,” he said. “Through the Pfeiffer family and their famous son-in-law, the Arkansas Delta came into contact with the art and politics of the larger world. The Delta also influenced the Hemingways and Pfeiffers. This interaction is a segment of Arkansas history that shouldn’t be missed.” 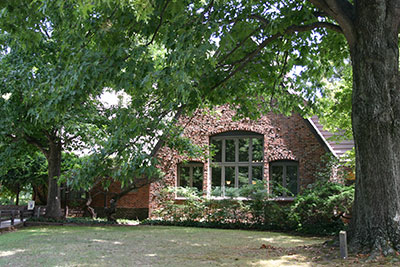 A very brief walk away is the Matilda and Karl Pfeiffer Museum and Study Center, home of Pauline’s younger brother, Karl, and his wife, Matilda. Sitting on 11 acres, the 4,938-square-foot 1930s Tudor Revival is a beautiful dwelling that showcases a different colorful past. Its biggest claim to fame is that scenes were shot here for Elia Kazan’s classic film A Face in the Crowd, starring Andy Griffith, Patricia Neal and Walter Matthau, based on the short story “Your Arkansas Traveler” by Budd Schulberg. It held a premiere in Piggott as well.

Teresa Taylor, director of the center, said the film came to be shot in Piggott through Hemingway, inadvertently at least. 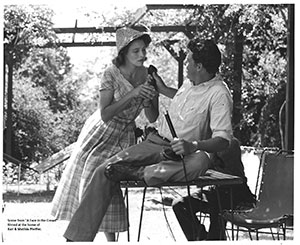 Scenes from A Face in the Crowd, starring Andy Griffith and Patricia Neal, were filmed in Piggott, like this one at Karl and Matilda Pfeiffer’s home.
Courtesy of Matilda and Karl Pfeiffer Museum and Study Center

“There was a local man here named Toby Bruce,” she said. “He became good friends with, Hemingway and sort of tagged along with him, even during the years after Hemingway and Pauline divorced. At one point Schulberg and Kazan were talking with Hemingway about wanting to do the film. Toby Bruce was present as they were describing the type of location they were looking for. Toby realized and suggested his hometown of Piggott, and the rest is history!”

The center has some very interesting collections. During the mid-1960s, Matilda began to collect minerals, a hobby she kept up for 25 years. What started with a few geodes expanded to 1,400 specimens. Taylor said dealers would even pay visits to her home to sell new pieces. The minerals are on display in the home today.

The other collection is of Native American artifacts found locally by Laws Cargill, a furniture store owner in Piggott. His lifelong hobby was walking the fields to find the artifacts. He kept them at the furniture store he owned. When he planned to retire he didn’t want to move the collection to his home, so he put them up for sale. Matilda found out about the sale from someone travelling from St. Louis to look at the collection. Since she didn’t want to see them taken from the area, she went to see Cargill first, and bought the whole collection.

Taylor said, “The home is a reminder of the rich historical presence 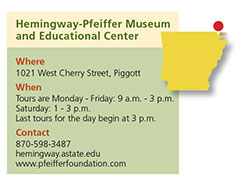 and impact this family had on their community.”