The coronavirus pandemic has been compared to an enemy in a war, and so it was fitting that the frontline troops in this fight, health care workers, first responders and other essential workers, were honored with two ceremonial flyovers last month.

Walton, the grandson of Walmart founder Sam Walton, flew an F2G Super Corsair 1944 in the formation with three North American P51 Mustangs. The planes cruised at about 250 miles per hour at an altitude of 1,000 feet over the cities.

On May 14, the U.S. Navy Flight Demonstration Squadron, the Blue Angels, honored frontline COVID-19 responders and essential workers with a formation flight over Little Rock.

“The America Strong initiative is a way for the Blue Angels to show appreciation to the thousands of nurses, doctors, firefighters, grocery store employees, military personnel and many others who are at the frontline of the pandemic response,” said Cmdr. Brian Kesselring, U.S. Navy Blue Angels commanding officer and flight leader for the flyover. “This is our opportunity to salute each American in the fight against COVID-19.”

A formation of six F/A-18C/D Hornet aircraft conducted the flyovers as a collaborative salute to health care workers, first responders, military, and other essential personnel while standing in solidarity with all Americans during the COVID-19 pandemic.

The formation flew over Nashville, Tennessee, around noon before heading over to Little Rock at 1:45 p.m. In preparation for the flyovers, the Blue Angels discouraged people from traveling to see the event and to maintain social-distancing guidelines while watching.

For more information on the Blue Angels, visit blueangels.navy.mil. A cockpit video of the Little Rock flyover is available at youtube.com/watch?time_continue=62&v=xxnXa4gip9Q&feature=emb_logo. 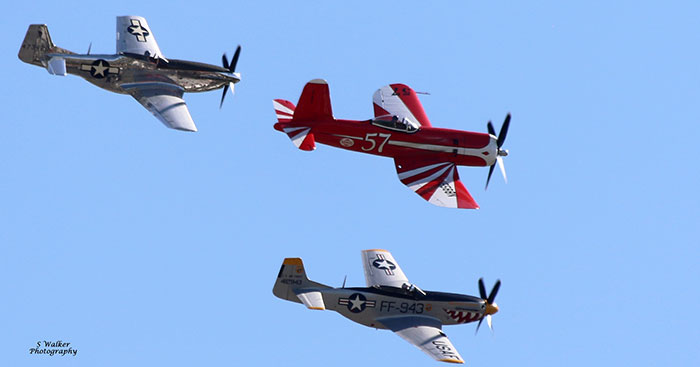 World War II aircraft fly over Mercy Northwest Hospital in Rogers as part of the “Arkansas: A United State” flyover to honor health care workers, first responders and other essential workers in the fight against the coronavirus. photo Steve Walker