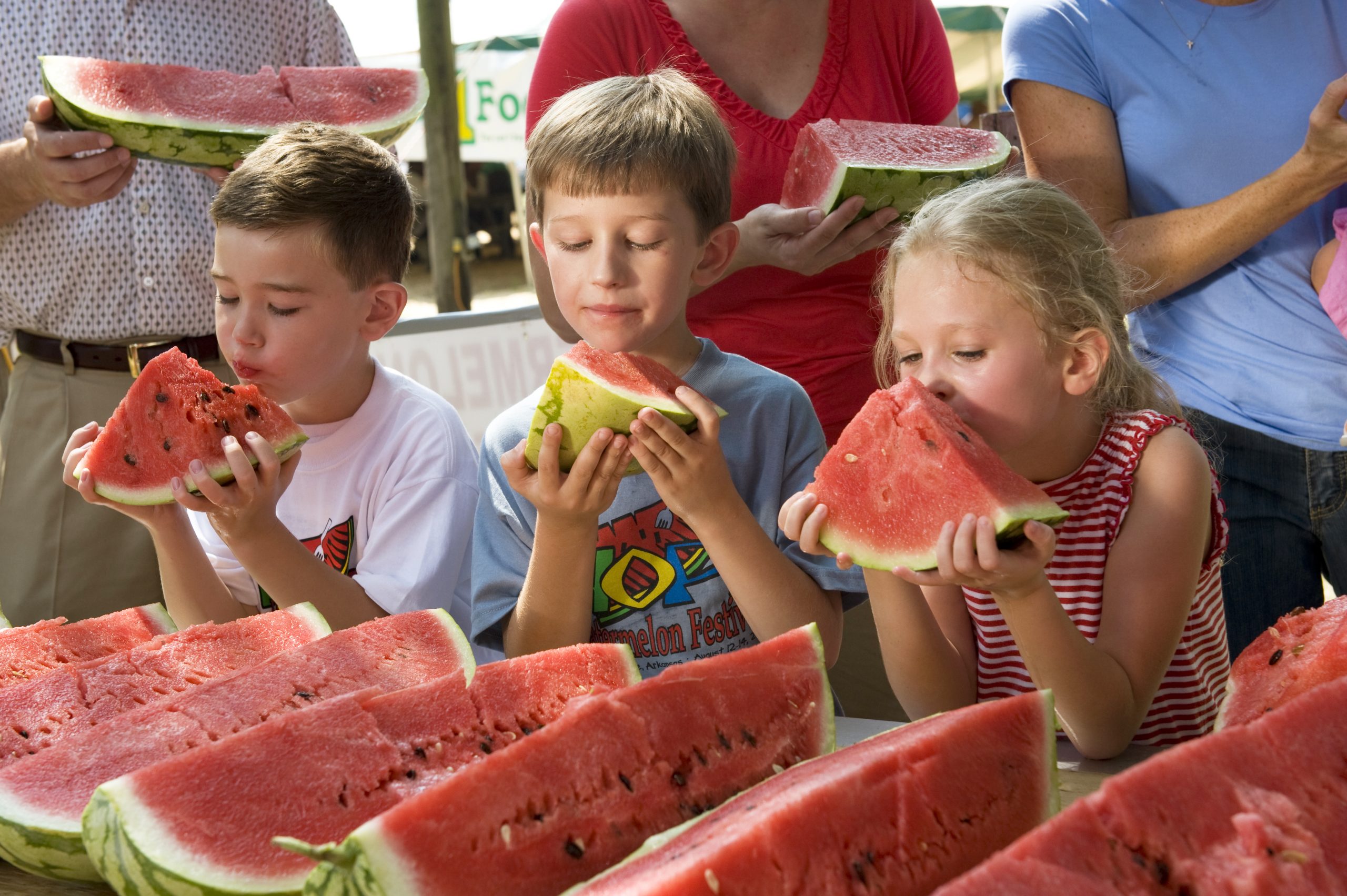 One of Arkansas’ most delectable festivals will be bursting with juicy flavor Aug. 11-13 in Hope, which proudly styles itself as the “Watermelon Capital of the World.”

There are other claimants to that succulent title. But the Hempstead County seat, which gained wide fame in the 1990s as President Bill Clinton’s birthplace, is seeded first in terms of seniority. Its watermelon festival has taken place on and off since 1926. Mainly because of a hiatus from 1931 until the event’s revival in 1977, the 2022 festival is counted as the 46th.

“This is a full-fledged family event,” says Christy Burns, director of the sponsoring Hope-Hempstead County Chamber of Commerce. “We have activities that are a fun way for visitors of all ages to be involved. The pleasure we get as Chamber of Commerce organizers comes from the smiles we see on so many faces.” 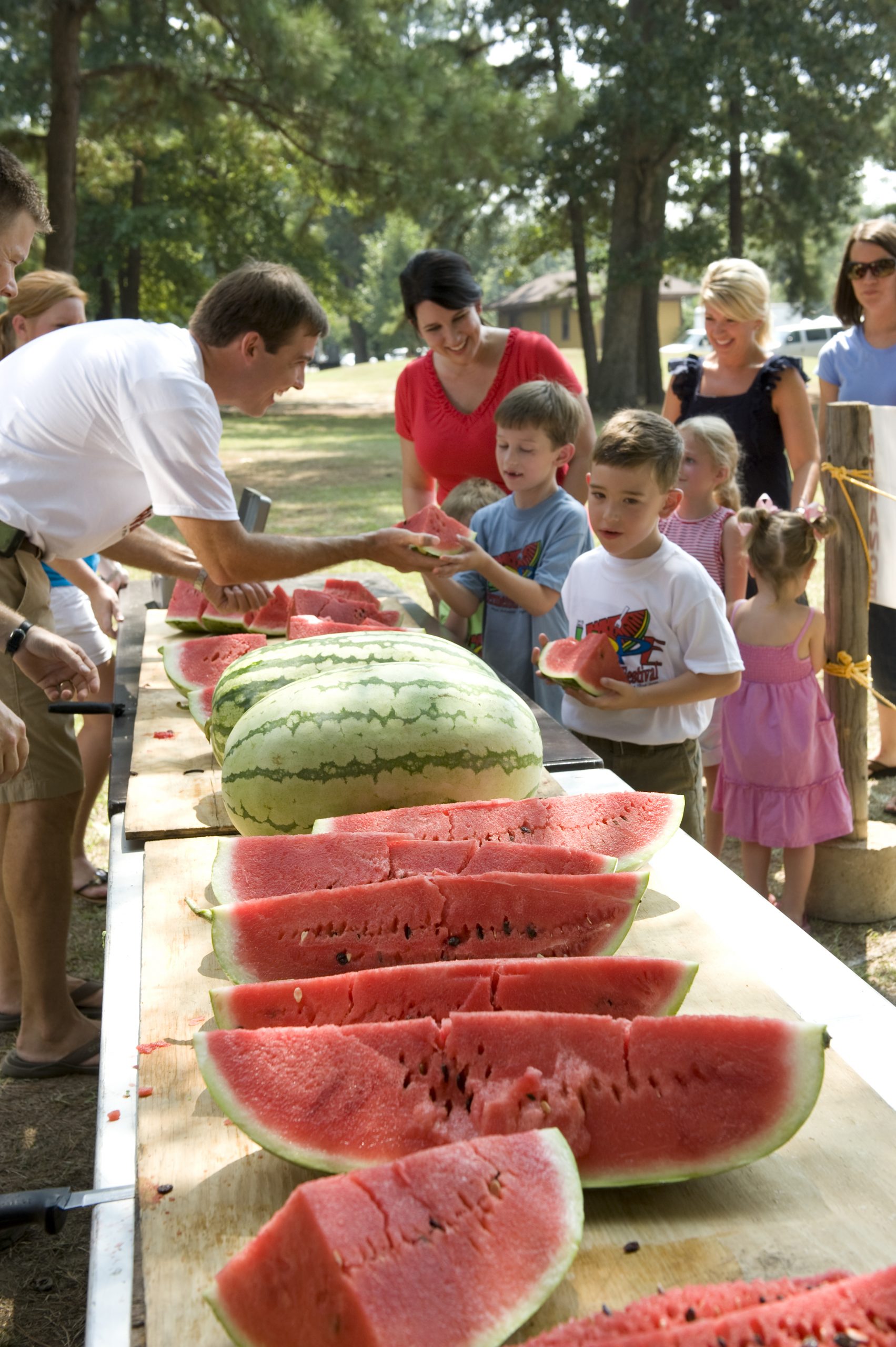 Sold by the slice for $1.25 each, ice-cold watermelon is the star attraction at the Hope Watermelon Festival. Photo courtesy of Arkansas Department of Parks, Heritage and Tourism.

Those competitions figure to draw avid participants. Also busy will be the dozens of vendors selling arts and crafts. But the most popular aspect of the festival, as Burns reports with enthusiasm, “is food, food, food! We’ll have the usual wide variety.”

Food booths will purvey a cornucopia of edibles. It’s no surprise to learn that watermelon plays the starring role, with ice-cold slices on sale for $1.25.
Competitive feasters can take part in watermelon-eating events, where speed of consumption outweighs savoring the juicy flavor. Seed spitting offers more melon-focused rivalry.

Given Hope’s longstanding pride in the heft of Hempstead County watermelons, a much-awaited event is the weighing of heavyweight competitors on the evening of Aug. 11. The grower of the largest melon will receive a trophy. Then the jumbo specimens will be auctioned on Aug. 13 to the highest bidders.

“We can’t wait to see how big the biggest watermelons will be this year,” Burns says. “The weigh-in and auction are always very exciting.”

The gargantuan watermelons are raised mainly to provide seeds for growing future crops. They are usually less flavorful than those sold at grocery stores and roadside stands.

While festival admission is free, there is a charge for the Aug. 13 concert by Uncle Kracker on the CMC Stage inside Fair Park. Adult general-admission tickets for the evening concert are $20 in advance, $25 on the day of the show. Children’s tickets are $10. All reserved-seat tickets are $40. Ticket information is available by visiting hempsteadhall.thundertix.com. 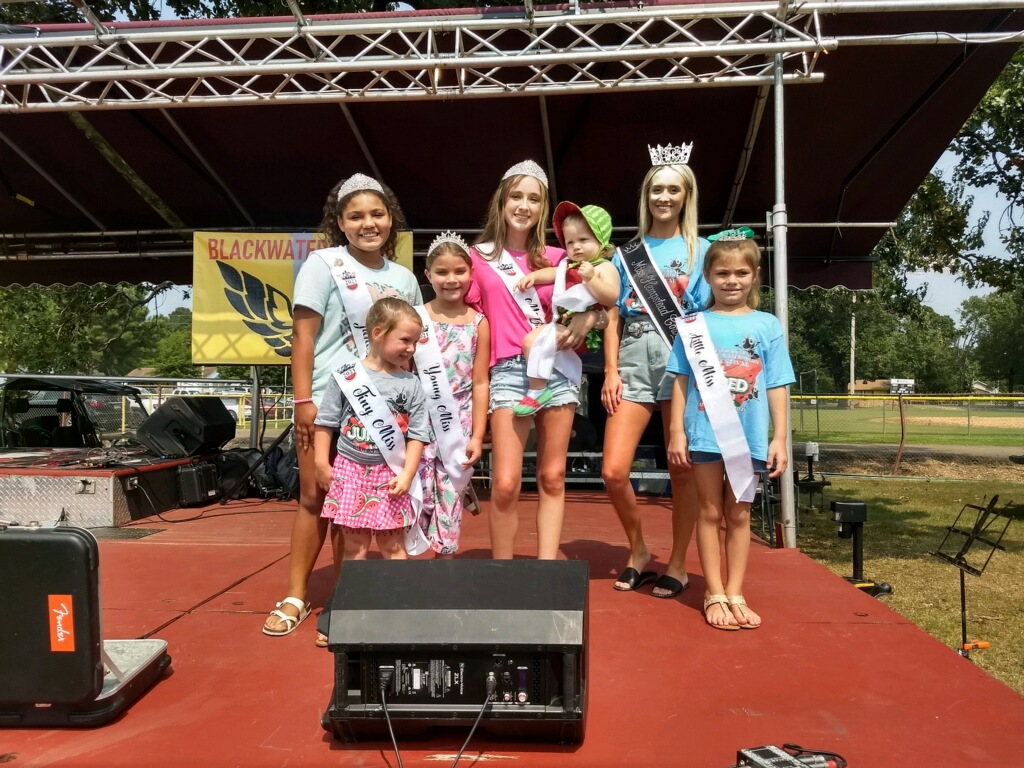 In addition to events like the Watermelon Olympics, the festival also features pageant competition. Photo courtesy of Hope-Hempstead County Chamber of Commerce.

Although the first Hope Watermelon Festival dates to 1926, there’s a prehistory going back to 1916. That’s when John S. Gibson, a Hope pharmacist and drugstore owner who sold watermelon seeds, started offering small prizes to growers of the largest melon.

Local farmers Hugh and Edgar Laseter developed a seed line that produced a 136-pound melon in 1925. That feat, according to the Encyclopedia of Arkansas, “generated the excitement that led to the first watermelon festival the following year.” 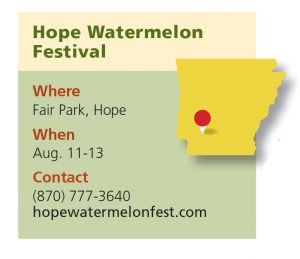 Crowds for the 1926-1930 festivals numbered as high as 30,000. The encyclopedia reports that “Fox, Pathe, Paramount and Metro-Goldwyn Mayer News filmed some events to show in movie theaters nationwide.” The early festivals included parades and crowning of a Watermelon Queen, after which the audience was served free iced melon. A giant melon was shipped in 1927 to President Calvin Coolidge.

The onset of the Great Depression brought the event’s cancellation in 1931, leading to a decades-long hiatus until 1977. That’s when the Hope-Hempstead County Chamber of Commerce began sponsoring the current version, which has been staged annually except for pandemic-canceled 2020. Attendance at the three-day event usually runs around 20,000.

From 1986 to 2013, a Hempstead County family of growers held the Guinness World Record title for Largest Watermelon. Jason Bright grew a 260-pound beauty in 1986. It was surpassed in 2005 by Jason’s father, Lloyd Bright, who harvested a 268.8-pound whopper. Guinness declared a new record-holder in 2013 when Tennessean Christopher Kent grew a 350-pound behemoth.

“Whatever the record books might say, we’re still the ‘Watermelon Capital of the World,’” Burns says. “Anyone who doubts that can see for themselves at our festival.”