Renowned author Dee Brown once praised the Hot Springs bathhouses for radiating a “spirit of elegance and luxury, reminiscent of old Rome at the height of its pagan glory.”

Previously a “federal reservation,” Hot Springs was designated as the nation’s 18th national park in 1921. Courtesy of Arkansas Department of Parks, Heritage and Tourism

Those man-made splendors, mingling with the allures of nature, continue to make Hot Springs National Park a nonpareil pleasure during this year’s centennial marking its establishment by Congress in 1921.

“As a visitor, I was always familiar with the beauty of Bathhouse Row,” says Park Superintendent Laura Miller, who grew up in neighboring Saline County. “But since I started working here in 2018, I’ve hiked many of the park’s trails. And I’ve realized how fortunate we are to have them right here around downtown. It’s so easy to get a dose of nature — just a short hike and you forget you’re in the middle of a city.”

A panoramic view of Hot Springs and its lush natural surroundings. photo by Linda Henderson

When Congress made Hot Springs America’s 18th national park, the site had already been under U.S. supervision since 1832 as a “federal reservation.” Long before that, its healing waters had been known to the Quapaw and other Native Americans. In 1921, its most elegant bathhouses rivaled those in Baden-Baden, Germany, and other fabled European spas.

Hot Springs is now one of 63 full-fledged national parks, among 423 entities administered by the National Park Service. At 9 square miles, it is the second-smallest, larger only than Gateway Arch National Park in St. Louis.

As COVID-19 precautions ease, Miller says that Hot Springs National Park “is hosting in-person events to celebrate the centennial as the year progresses, subject to change as necessary for the safety and well-being of the community.”

Two programs are set to last all year. The Iron Ranger Challenge asks people to hike, bike, run or paddle at least 100 miles in total on any public lands in Arkansas. A much less strenuous undertaking is 2021’s monthly photo contest.

Other scheduled happenings include: B.A.R.K. Ranger Day for dog owners in July; Junior Ranger Day in August; Thermal Springs Festival in September; and Archeology Day in October. Details on events and other visitor information can be found at nps.gov/hosp. The telephone number is 501-620-6715. 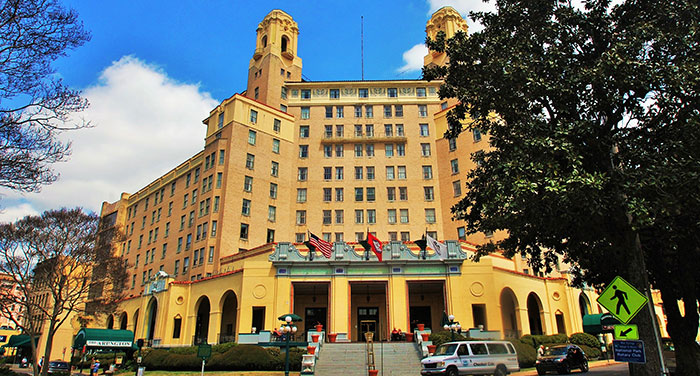 An odd wrinkle to the map of Hot Springs is that the national park nearly encircles some of the city, with boundaries creating an elongated doughnut hole. The eight bathhouses, on the east side of Central Avenue, are in the park. Just outside the park, on the avenue’s west side, are such attractions as the Josephine Tussaud Wax Museum and The Gangster Museum of America.

“That layout is because the park and the city literally grew up together in the 19th century,” Miller says. “As the park developed, the federal government took on a larger role in managing the bathhouses and protecting areas thought to be the thermal springs’ recharge zone. That’s where water enters the ground higher up and filters through the system to emerge at the springs,” with an average temperature of 143 degrees.

In contrast to Bathhouse Row’s flat terrain, much of the national park is hilly, sometimes steeply so. Some of the nearly two dozen marked trails include seriously uphill stretches, while others are less demanding. Most of the 16 trails on Hot Springs and North mountains are accessible via the Grand Promenade, entered behind the Fordyce Bathhouse or at three other points.

By far the park’s longest and most challenging hike, Sunset Trail takes in Sugarloaf, Music and West 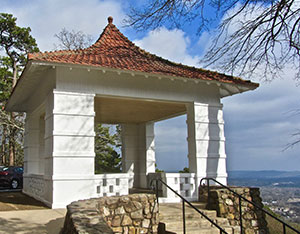 A pagoda built in 1911 along Hot Springs Mountain Drive is a shaded spot with wide vistas. photo by Marcia Schnedler

mountains. The full route covers about 10 miles one-way. Traversing some rugged landscapes, it passes through the most remote areas of the park.

The tower is reached by turning off Central Avenue onto Fountain Street and ascending sinuous Hot Springs Mountain Drive. A stop at Hot Springs Mountain Pagoda, built in 1911, provides sweeping vistas of downtown Hot Springs, with more Ouachita Mountains in the distance. Farther on, North Mountain Loop looks east over Goat Rock and the Zigzag Mountains.

Less-traveled West Mountain Scenic Drive has three overlooks. The first gives views of Bathhouse Row and the hulking former Army-Navy Hospital. The second features a mountain shelter built in 1924 with picnic tables. Views from the third extend as far as distant Lake Hamilton.

The bathhouses below, some of which faced possible demolition during lean tourism times in the late 20th century, are graced by spruced-up exteriors that echo Dee Brown’s “spirit of elegance and luxury.”

Only two of the eight offer thermal bathing, but five others are being used in some way. An ideal starting 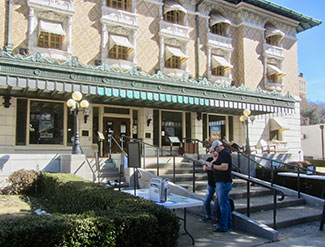 point is the recently reopened Fordyce Bathhouse. It houses the Hot Springs National Park Visitor Center and Museum, with three floors of exhibits that evoke the upper-crust heyday of therapeutic and recreational bathing.

“We are limiting Fordyce capacity to no more than 100 people at a time,” Miller says. “The building is difficult to manage because it is full of narrow, tight spaces. Face masks will still be prudent once inside. And we will have one-directional routing throughout the building to help keep groups separate.”

The most luxurious of the bathhouses when it opened in 1915, the Fordyce was recast by the National Park Service as a museum in 1989. Most of its lavish facilities have been restored to evoke the so- 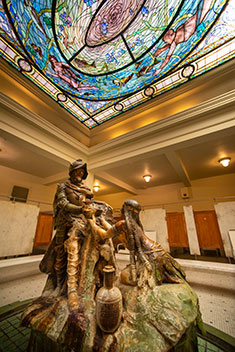 Displays in 23 of the Fordyce rooms portray such ornate touches as a life-size statue in the men’s bath hall of 16th-century explorer Hernando de Soto and a Native American maiden. Above that fountain, a stained-glass skylight depicts the Roman sea god Neptune and an ensemble of undraped women.

With Fordyce’s capacity limited, an assortment of brochures and other information remains available along the walkway to the Fordyce’s front porch, where oversize white chairs encourage relaxing. Miller says the printed material “is helpful for those who are not comfortable being inside just yet.”

Superior Bathhouse, the row’s northernmost structure, offers a thirst-quenching way to relax. It houses a 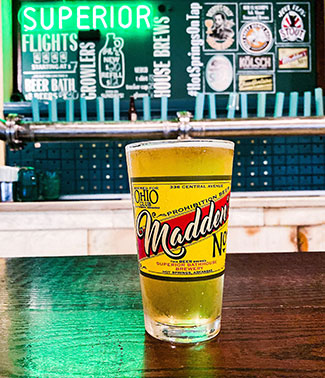 Superior Bathhouse is the site of a craft brewery, the only such operation in a U.S. national park.
Courtesy of Arkansas Department of Parks, Heritage and Tourism

craft brewery, the only one operating in any U.S. national park. The brewing process uses thermal water from the park’s springs.

Since May 2019, the boutique Hotel Hale has occupied Hale Bathhouse, originally built in 1892 and the oldest structure on the row. Each of the nine suites is equipped with an oversize tub for soaking in geothermal mineral water from the springs.

Maurice Bathhouse is the row’s one vacant property, available for commercial lease. It stands just north of the Fordyce. Next in the line is Quapaw Baths & Spa, operating again as a commercial bathhouse with a variety of facilities.

Sometimes open for art exhibits and other cultural events is the Ozark Bathhouse, flanked by Quapaw and the Buckstaff. The distinction of the Buckstaff is that it has functioned continuously since 1912 as a bathhouse. The row’s other seven properties were closed for at least some time.

Souvenirs marking the centennial are for sale at the southernmost Lamar Bathhouse, along with other 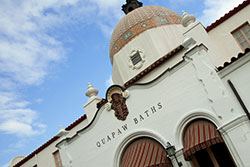 Quapaw Baths & Spa is operating again as a commercial bathhouse with a variety of services.
Courtesy of Arkansas Department of Parks, Heritage and Tourism

items themed to Hot Springs National Park. Among them is a 100-piece jigsaw puzzle depicting the Fordyce’s stained-glass panel of Neptune and nymphs.

In his 1982 book, The American Spa, Dee Brown waxed glorious about the Fordyce:

“The marble interiors, stained glass and enormous tubs gave it such an air of pomp and voluptuousness that bathers could easily imagine themselves in the Roman baths of Diocletian, with their perpetual streams of hot water pouring from founts with mouths of silver.”

With the Fordyce open again to visitors, that grandeur is once more on display.