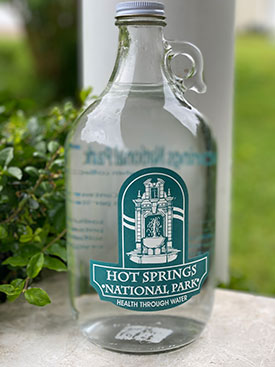 Buy your souvenir Hot Springs National Park jug at the Fordyce Visitor Center, and fill it with water from one of the park’s public fountains for free.

For all its offerings, Hot Springs National Park exists first and foremost because of the fascinating thermal water that has flowed from the earth’s depths here for thousands of years.

When the Egyptians were building the pyramids, the water that flows today from the park’s hot springs was falling as rain. Over the centuries, the rainfall traveled 6,000 to 8,000 feet below the earth’s surface, through the folds and faults within the Ouachita Mountains. As it traveled deeper and closer to the earth’s core, it got warmer and warmer. After about four centuries, the water hit a fault line, which pushed it back toward the surface over another 400 years. That is the water that now emerges at a toasty 143 degrees from 47 active springs in the Hot Springs National Park area.

In addition to its temperature, the water is characterized by several dissolved minerals — silica, calcium, calcium carbonate, magnesium and potassium. The calcium carbonate in the water forms a gray limestone rock known as tufa when the hot water cools and evaporates.

Many a visitor to the park has asked, “Where are the springs?” The National Park Service replies that they 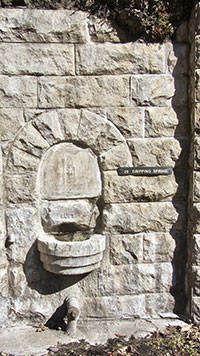 are located underneath locked green metal boxes along the sides of Hot Springs Mountain. The collection boxes are part of a piping system that brings the thermal water to an underground reservoir at the south end of Bathhouse Row. Pumps then move the water to bathhouses, where it is allowed to cool for the baths, most of which are offered at about 98 to 100 degrees.

In addition, there are cold spring fountains containing water from cold springs, which have different

How safe is it? The National Park Service says, “The water’s high temperature kills most harmful bacteria, and it is monitored to U.S. standards for safe drinking water.” But it encourages those with medical conditions to consult with a physician before use.