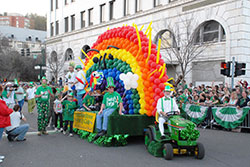 “There’s something for the entire family,” says Steve Arrison, CEO of Visit Hot Springs. The day’s festivities start at 4:30 p.m. on Bridge Street, with the parade itself kicking off at 6:30 p.m. under the supervision of actor Gary Busey, the official parade starter. It will include Irish Elvis impersonators, the World’s Largest Leprechaun, Dallas Cowboy Cheerleaders, green Irish wolfhounds, and celebrity Grand Marshals the Bacon Brothers, “plus a surprise or two.”

“It’s just a lot of fun,” Arrison says. “Everybody is dressed up and wearing green, and the fountains are dyed green all around downtown.”

Thirteen years later, the event has become an internationally recognized Arkansas tradition, with an estimated 30,000 annual attendees. “Every year the crowds are bigger,” says Arrison, who with tongue firmly in cheek has already announced the official 2016 attendance at 30,009 — up from 2015’s “official” count of 30,006 to include Busey and the Bacon Brothers, actor Kevin Bacon and his older brother Michael, an Emmy-award winning composer. In addition to following in the footsteps of previous celebrity grand marshals like Mario Lopez, George Wendt, Jim Belushi, and couple Bo Derek and John Corbett, the Bacon Brothers will showcase their unique blend of rock, soul, country and folk in a free public concert immediately after the parade.

Busey is also doing double duty this year, not only starting the parade but also composing one of his famous “Buseyisms” in honor of the occasion. Busey, whose film and television career spans 46 years and includes an Academy Award nomination for “The Buddy Holly Story,” is beloved by fans for both his impressive talent and his colorful, eccentric personality.

“I have a hobby that’s really wonderful because it helps me understand the meaning of one word with a sentence that reflects the word’s meaning and definition,” says Busey. His contribution to this year’s celebration is IRISH: Independent Rowdy Indomitably Spirited Humans.

“We will use the Hot Springs Buseyism on posters, T-shirts and other promotions for our March 17 parade,” says Arrison. Merchandise will be exclusive to the occasion and only available in Hot Springs.

Since 2004, a group of Irish-styled Elvis impersonators known as the International Order of the Irish Elvi: Hot Springs Chapter, has been a signature feature of the event, and they will return again this year. The Order encourages anyone in costume to join them.

The parade “brings so many things into focus for me,” agrees Bethel Galowitsch, who makes an annual 600-mile round trip for the event, like “how awesome my hometown is, and how lucky I was to grow up in such a warm (and quirky) place.”