One definition of a hero is a person who, when there is trouble, runs toward it rather than away from it. Last 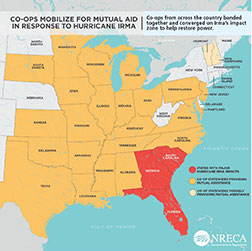 These lineworkers endure some pretty tough conditions, often with very limited support. They go in with their own tools and equipment, food and water, prepared to stay for an indefinite period. They work long days in difficult conditions, and when they finally get rest, they sometimes have to sleep in their trucks because there are no better facilities available to accommodate them.

I’m glad that Arkansas’ electric co-op employees are eager to help their neighbors in need. After all, in 2009, when a devastating ice storm turned off the lights for tens of thousands of Arkansans, workers in other states mobilized to help us.

It is a measure of today’s society and its near-complete dependence on reliable, affordable electric power that most press reports from the hurricane disaster led with two facts: first and foremost, the human cost in terms of lives lost due to the storms, and second, the number experiencing the loss of electric power. Think about that: No. 1, lives lost; No. 2, power lost. Our society cannot function without electric power. This is a huge responsibility for all of us in the electric power business, and one we take seriously.

In times of trouble, heroes across our nation rush to help. I was in Dallas at the onset of Hurricane Harvey, and there I saw hundreds of first responders staged and ready, impatient for the storm to abate so they could roll in to begin their rescue work. Seeing their enthusiasm and eagerness to help gave me a new pride in humanity.

In both Harvey and Irma, our federal government at the highest levels engaged in daily calls with utility leaders to coordinate the restoration of electric service. In both events the electric utility sector had a direct line to the president’s cabinet, and every request, be it for fuel, or travel permits, or aerial inspections was met with immediate response. Their concern was gratifying, but their prompt action was most impressive and undoubtedly saved lives and reduced outage times.

No one wants disasters, but disasters can give us a glimpse of the best of humanity. Michael Novak, an American Catholic philosopher, journalist, novelist and diplomat, said, “Love is not a feeling of happiness; it is a willingness to sacrifice.” Through their actions, our brave linemen have shown us the truest measure of their love.